How Much is Eric Schmitt Worth? 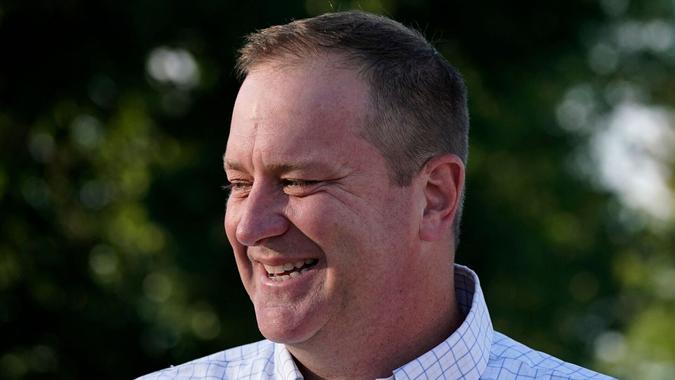 Eric Schmitt (47), is a Republican politician who is running for a United States Senate seat (representing Missouri) in the upcoming November election. Since he has a significant lead in the polls against his Democratic opponent, Trudy Busch Valentine, it is unlikely that he will take her on in a public debate. Both sides have accused the other of ducking said debate.

See: Everything’s Bigger in Texas — Including Taxes, Which Are Outpacing California
Find: How Rich Is Meghan Markle?

Schmitt is a vocal supporter of former President Donald Trump, and received his endorsement during the current campaign.

Since 2019, he has served as the attorney general of Missouri. His predecessor, Josh Hawley, vacated the spot after he was elected to the U.S. Senate in 2018.

Prior to that appointment, Schmitt served as state treasurer for two years, and as a state senator from 2009 through 2017. Schmitt joined the adjunct teaching staff of St. Louis University four years ago.

His salary from the state for his role as attorney general pays $184,358.52 as of 2021, which is more than the $174,000 he would receive if elected to the U.S. Senate.  He and his spouse, Jamie Forrester, have several combined investments and bank accounts valued at a minimum of $100,000 each, but his non-estimated net worth has not been disclosed, according to SEC Report.

Eric Stephen Schmitt was born in Bridgeton, Missouri, on June 20, 1975.  He played football and baseball for Truman State University, and founded a Habitat for Humanity chapter on campus. Schmitt served as an editor for Saint Louis University’s Law Review, where he received his law degree.

Discover: 6 Types of Retirement Income That Aren’t Taxable
More: Can I Draw Social Security at 62 and Still Work Full Time?

He began practicing law, eventually becoming a partner at Lathrop & Gage, LLP. He was an alderman for Glendale, Missouri, for three years beginning in 2005, and also served on various non-profit boards.

Schmitt and his wife, Jamie, have three children together.