How Much is Mandela Barnes Worth? 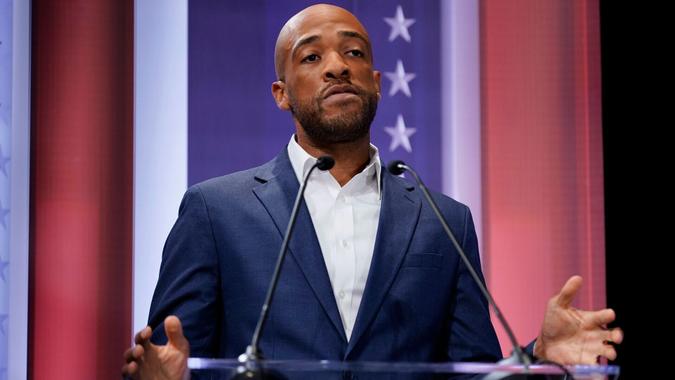 Mandela Barnes, 35, is an American politician who currently serves as the lieutenant governor of Wisconsin and is running for a Senate seat against Republican Sen. Ron Johnson. The race is very close with Barnes, a progressive Democrat, being the slight front-runner in recent polling.

He is currently taking some heat for not being present while President Joe Biden was giving a Labor Day speech on Sept. 5, reportedly hesitant to offer answers regarding his absence, per the Wisconsin State Journal.

Barnes has been serving as lieutenant governor of Wisconsin since 2019. He and current Governor Tony Evers appeared on the Democratic ticket together. Prior to this, he served in the Wisconsin state Assembly from 2013 through 2017, according to the Milwaukee Journal Sentinel.

During the 2018 gubernatorial election, Barnes was not officially employed, so he did not file taxes at this time.

His state government salary is $80,684 per year and he has investments and savings reported to be worth $5,005 and $75,000, the Milwaukee Journal Sentinel reported.

He has been reported to own property in Milwaukee and Madison.

Jesse Mandela Barnes was born to Jesse and LaJuan Barnes on Dec. 1, 1986 in Milwaukee, Wisconsin. While he was named after his father, he has been using his middle name, a reference to Nelson Mandela, as his first name since birth. His mom was a public school teacher and his dad was a member of the United Auto Workers union.

Barnes attended Alabama A&M University for several years in the mid-2000s, but did not officially obtain his communications media degree (a Bachelor of Arts) until 2020.

Take Our Poll: How Do You Typically Split the Restaurant Bill?
More: What Is the Average Social Security Benefit at Age 62?

Barnes is unmarried and has no children.