Movies Without Popcorn? Supply Chain Issues Cause a Shortage of the Salty Snack 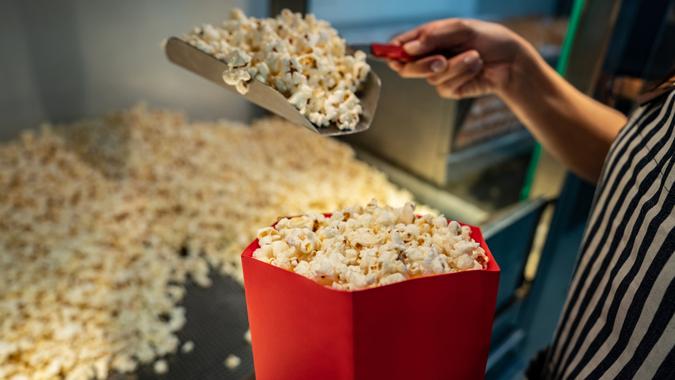 As fans flocked to the opening weekend of “Top Gun: Maverick” to the tune of $300 million, movie theater owners celebrated. But behind the scenes, a scenario is unfolding that’s even more nail-biting than the incredible flight sequences on the screen. Will the concession stand have enough popcorn to satisfy hungry guests?

See: 10 Things You Always (and Never) Should Buy at the Dollar Store
Find:8 Best Food Items To Buy in Bulk at Walmart This Summer

As early as April 25, 2022, movie industry professionals were expecting a shortage of not just popcorn, but the containers it’s served in. The topic came up at CinemaCon, where Norm Krug, chief executive of Preferred Popcorn, said, “Popcorn supply will be tight.” His company is made up of farmers that supply popcorn kernels to movie theaters, according to an article in the Wall Street Journal.

Inflation and “other economic factors,” according to WSJ.com, are forcing the company to pay farmers more than in the past so they continue growing corn for popcorn instead of other crops that are more profitable and easier to grow, such as soybeans.

Additionally, the bags that traditionally hold popcorn are also hard to come by, because producers can’t secure the sheen linings that keep the butter flavoring from seeping out of the container. Of course, there are always cardboard buckets or even plastic containers, but that could drive up costs for movie theaters and, hence, consumers.

Theater owners also mentioned other shortages spurred by supply chain issues, including certain soda flavors, nacho trays and drink cups. Meanwhile, owners told WSJ.com, that theatergoers are buying more goodies for the show than ever before.

POLL: How Much Do You Expect To Spend on Travel This Summer?
Discover: 11 Things You Should Never Buy at Walmart

And what’s a trip to the movies without popcorn? “Pass the edamame,” just doesn’t have the same ring to it.