The monthly grocery budget in the U.S. varies from 12.4 percent to as much as 33 percent of household income, according to the USDA. With such a variation, you might be wondering how your grocery store bill stacks up to other people across the country.

GOBankingRates conducted a survey of 1,009 people. Each respondent answered the question, “About how much money do you spend each month on groceries?” Check out the surprising — and not so surprising — answers received about how Americans budget for groceries. 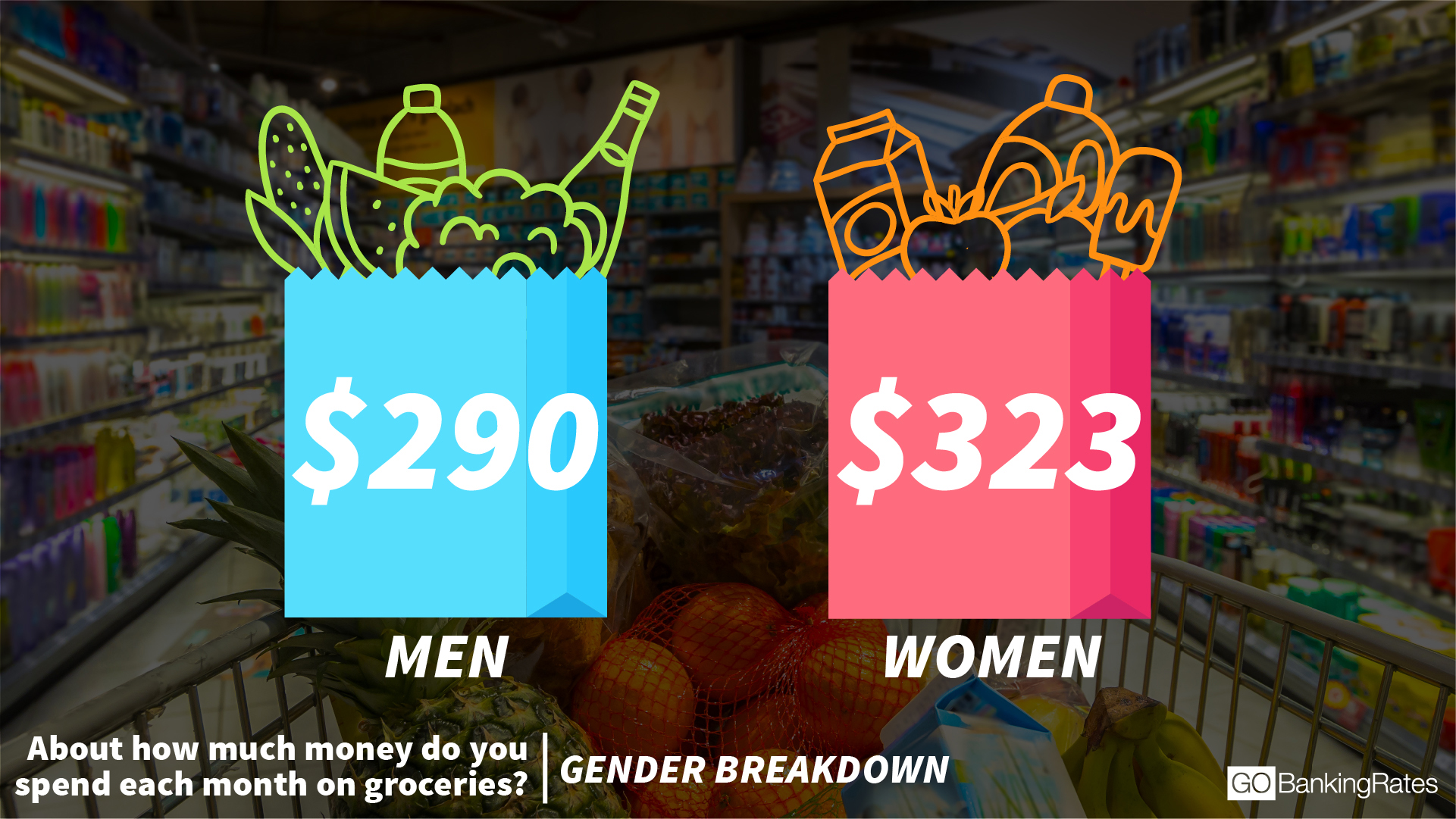 On average, women responding to the GBR survey spend 11 percent more per month than male respondents. Women surveyed, on average, reported shelling out $323 per month for groceries, whereas men averaged $290. Women account for 51 percent of grocery shoppers, according to research statistics from Video Mining, which provides in-store shopper analytics.

Women also spend an average of $2.73 more per shopping trip than men do. Roughly 74 percent of women report being their household’s primary cook, according to the USDA, which might lead to a higher average grocery bill.

Shopping habits between men and women differ, which could also account for the difference. Women are more likely to make a list of needed items before leaving home — with 69 percent of women reporting that they do so, compared with only 52 percent of men. Coupon clipping is another woman-dominated activity, featuring 57 percent of females searching out grocery coupons but only 41 percent of men doing so. Cupboard staples and coupon items make their way onto womens’ grocery list, which could lead to the slightly higher expenditures by women.

Learn More: 6 Reasons Why Women Are Struggling to Buy a Home 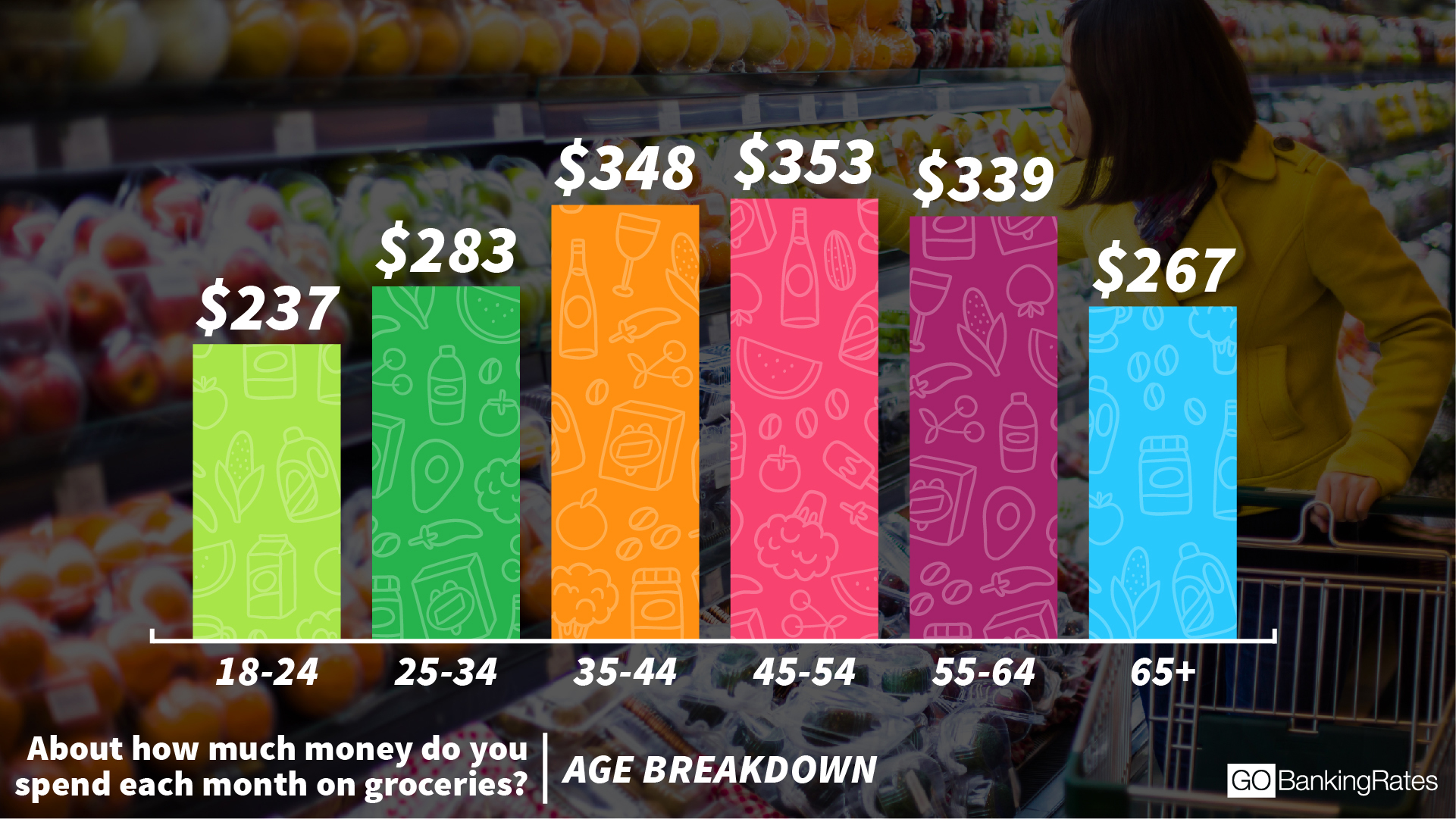 Millennials Have a Small Grocery Budget

Millennial respondents to the GBR Survey spent the least on the monthly grocery budget, with 18- to 24-year-old respondents averaging just $237 per month. That’s a third less than the average American age 45 to 54 — the group that reported spending the most.

The gap closely parallels statistics published by the U.S. Department of Labor on generational spending habits. Millennials even spent about $30 less per month than the average American over 65, noted as the group with the second smallest average grocery bill.

Millennials aren’t just living off the ramen noodles diet, either. But they do spend money differently than generations before them. Ignoring the advice of baby boomer family members, millennials eat an average of 1.77 meals per day, instead of “three squares.” They’re more likely to eat these meals in a restaurant or order take-out, make about four trips to the grocery store per month, and are also less likely to clip grocery coupons and more likely to order groceries online.

Brick-and-mortar grocery stores are scrambling to adapt to the new style of shopping habits displayed by the 79 million millennial consumers in America. Convenient in-store “groceraunts” are just one way retailers are attempting to draw younger consumers back to the store. Some are taking the dining and grocery hybrid to new heights, with these stores selling everything from diamonds to doorbells. 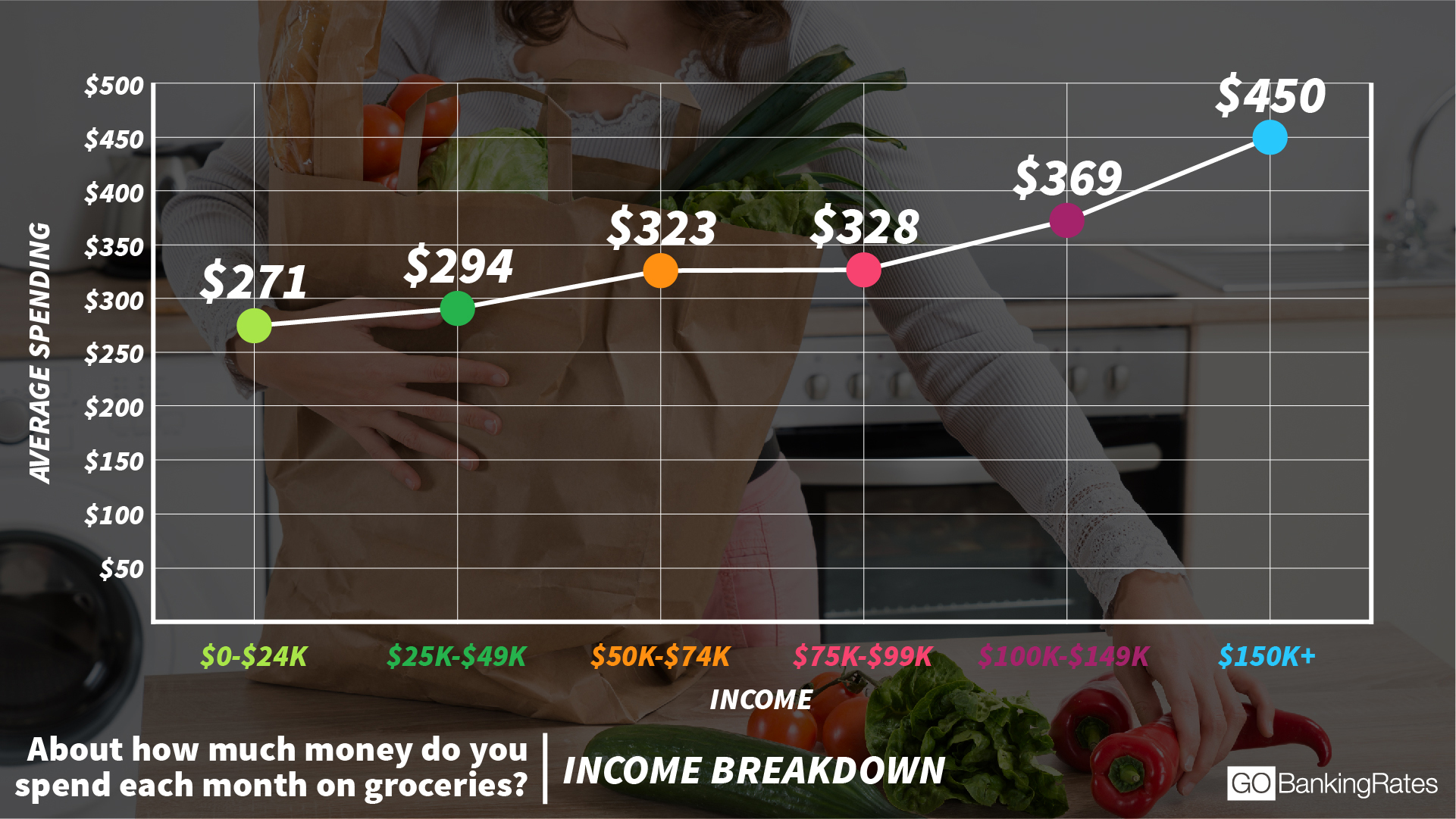 Respondents to the GBR survey making less than $24,000 annually spent an average of $271 per month on their grocery budget. Not surprisingly, as income increased, so did grocery spending:

Unsurprisingly, a higher income rolls out a smorgasbord of options. People with higher income can afford to pay more for organic produce, prepared foods and gourmet items. Low income not only comes with a need to make every penny count to stretch the food budget, but it can also come with few choices. Impoverished and rural areas where lower income workers reside are often food deserts without access to fresh produce or other healthful whole foods. 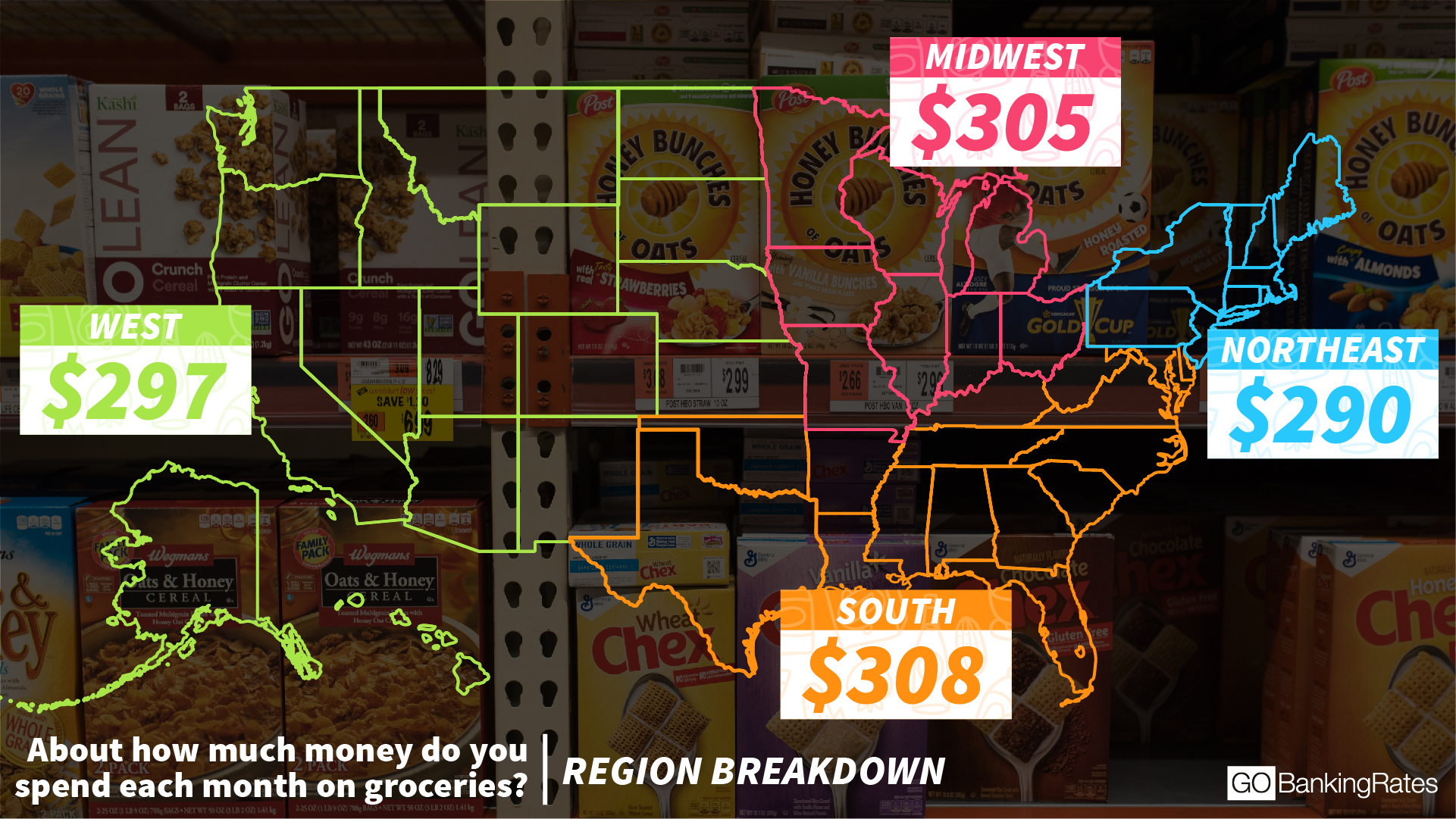 Check Out: 11 Best Grocery-Delivery Services That Are Worth the Money

People Living in the South Spend More on Groceries

Southern states are legendary for their tasty cuisine, so it comes as no great surprise that Southerners’ grocery bills top the nation at an average of $308 per month. That’s in addition to the amount Southerners spend splurging on fast food.

People living in the Midwest had the second highest average grocery bill at $305. The difference, however, doesn’t amount to higher grocery prices across the country. According to average food prices provided on Numbeo, the Midwest and the South have the lowest grocery prices nationally. These states also have the highest rate of obesity, according to the CDC.

The Northeast had the lowest average food cost per month at $290 and the West the second lowest at $297. These states also have some of the lowest obesity rates in the nation, and prices as much as 17 percent higher than the lower-priced groceries in the Midwest.

More Insights: 55% of Americans Are Splurging on Things That Could Kill Them

The GOBankingRates survey was one of five polls asking Americans about their monthly household expenses. Groceries came in as the second most expensive monthly budget item, followed by rent or mortgage.

Respondents spent more on groceries at $302 per month than the combined cost of their car payment ($166), household necessities ($61) and clothing ($50).

Planning a careful grocery shopping strategy can save you hundreds of dollars on your annual grocery tab. Meal planning apps like eMeals take the guesswork out of menu planning by prepping an entire week’s worth of meals for a monthly price of $5 to $10. Print off a custom grocery list to shop for ingredients, or send the list to Walmart, Kroger or other participating stores to pick up your ingredients and avoid impulse shopping. Menus are designed for your eating style with plan options ranging from kid-friendly to Paleo. As a free alternative, the What’s for Dinner website lets you browse recipes and create your own custom shopping list.

Next Up: 35 Ways to Save Hundreds on Groceries 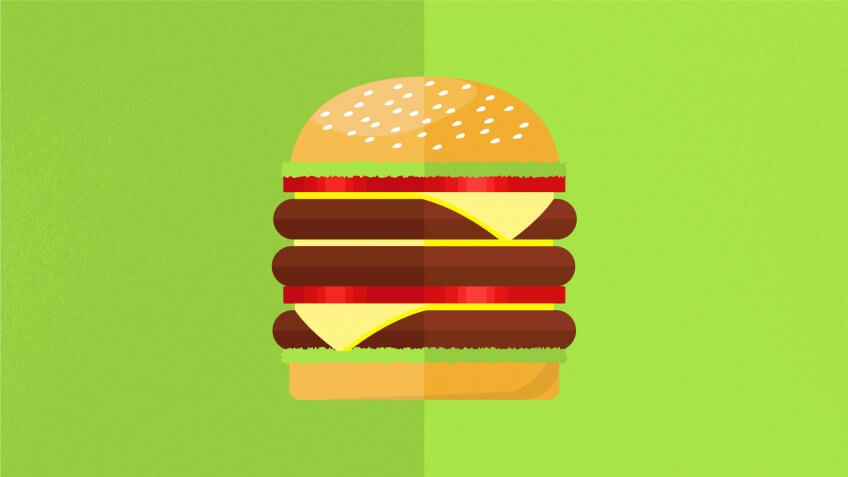 Find out where to indulge for less on this delicious holiday.