Have you started shopping for the holiday season? If you haven’t, you’re slightly behind schedule. As it turns out, 39% of consumers have already started their holiday shopping well before November, according to a recent survey from the National Retail Federation (NRF). What’s more, excessive spending may be in the cards for most shoppers looking for the perfect gift. According to Experian, shoppers plan on spending 75% more this season. In October, the NRF predicted that 2019 holiday spending will increase by about 4% to a total of more than $730 billion in sales. But with all of this spending, are shoppers taking full advantage of the opportunities to save?

To learn more about shoppers’ spending habits, GOBankingRates surveyed nearly 1,000 Americans who planned on shopping this year for the holidays. Respondents were asked various questions regarding budgets, holiday debt and strategies for savings.

Here are some of the key takeaways from the survey:

It seems as though American shoppers will not be taking advantage of savings this year when shopping for the holidays. Over 75% of survey respondents said they do not use a rewards credit card, cash back or rebates when shopping.

“This holiday season is busy for many consumers with everything there is to do — get your home ready for guests, decorate, bake, attend various parties and shop for gifts. It’s easy to overlook saving opportunities,” said Andrea Woroch, a nationally-recognized money-saving expert. “However, if you aren’t looking for deals, coupons and comparing prices this time of year, you’re leaving money on the table.”

Instead, They’re Hoping For Deals and Sales From Retailers

It may come as a surprise that the youngest generation — Generation Z — might be flocking to shopping malls instead of shopping online, CNBC reported. This is, in part, due to their lack of credit cards and personal funds. Perhaps this is good news for brick-and-mortar stores, which have seen a sharp decline in the past year. However, Generation X shoppers may end up spending the most, as they are shopping for three generations’ worth of people — themselves, their children and their parents.

Unfortunately, many shoppers are not taking advantage of the free money these retailers are offering. Only 20% of shoppers are planning on downloading and using a coupon or money-saving app. Many consumers are even refusing to use their own free money, as less than 15% of shoppers plan on using credit card rewards they have already accrued to save big this holiday season.

“People make a budget for the holiday season and either don’t look at it, base it on the wrong numbers or go over it knowingly and can’t do anything differently,” Brian J. Imrich, a certified financial planner and founder of GPS Financial, LLC. “In order to optimize spending, first you need to keep track of it and set a high ceiling.” For example, Imrich explained that if your budget is $500, you should set the ceiling at $800 knowing you’ll likely get there with your holiday spending. But many consumers aren’t following this strategy during the holidays, which may damage the spending plan.

It’s the season of giving — but this year, many consumers don’t have the means to afford it. The average budget for holiday shoppers this year seems pretty steep — $537.69 to be exact. But many Americans might have to tighten the purse strings, as most consumers don’t have that kind of cash to spend. U.S. News & World Report discovered that 40% of consumers didn’t have any money saved for the holidays. When you are already cutting corners to pay your bills, adding the expense of gifts, decorations and food can lead to financial stress. Survey respondents expected to be $223.73 in debt after the holiday season, which means shoppers only have about 58% of what they need for gifts this year.

The holiday funds changed, though, based on age. Interestingly enough, 13- to 17-year olds had the largest budgets to work with at nearly $682, though they expected to be $366.50 in debt by the new year. Concerning budget, the 65 and over age group followed closely behind at a little over $611; however, their debt only amounted to $167.62. There was a significant decrease in funds for older Gen Zers and millennials at nearly $411 and $430, respectively.

1 in 4 Will Dip Into Their Savings To Afford Everything

With many Americans unable to cut costs for the holidays, consumers are resorting to other means to stay in budget.

One-fifth of respondents plan to take on a second job or side hustle just to get by. But is this the right tactic? “Cutting expenses sometimes isn’t enough to find extra wiggle room in your budget,” Woroch said. “The best part (of a side hustle) is you can often work from home or whenever you want.”

Nearly 27% of both men and women said that reaching into their savings is the best strategy when tackling the stress of the holidays. Twenty-one percent of women plan to take on a second job or side gig, with over 19% of men choosing this answer. Regardless of gender, many survey respondents didn’t think that asking their boss for a bonus or opening a new credit card was the best approach when planning ahead.

Though men and women seemed fairly in agreement on their strategy for the holiday, the age demographics painted a different picture.

The younger age demographic seemed to think a second job was the most feasible option for getting cash this season. It was the most popular answer for survey respondents ages 13- to 17-years old at nearly 31%, with 18- to 24-year olds closely behind at over 28%, perhaps indicating their lack of savings. Older respondents may have more cushion in regards to holiday funds, with the 55-to-64-year-old and 65-and-over age groups most likely to dip into their savings at about 33% and 44%, respectively.

Consumers of all ages are spending more than ever on gifts this year. Even though it can be tough to pinch pennies when there are so many things to buy, it’s important to consider your budget.

How To Save Money On Your Holiday Shopping This Year

The holiday season can cause a lot of unneeded stress. Jason Thacker, head of US Deposits & Consumer Payments at TD Bank, offers some tips on the best ways to optimize your spending and save up for the holidays:

Track your spending. “The memory or sentiment around the holidays can lead folks to dig deeper into their pockets and overspend,” said Thacker. Keeping a daily or even monthly list of expenses can be an effective way to cut costs.

Identify financial stressors. “By setting aside time to look at your expenses and cash flow, you can identify unnecessary spending habits and explore gift alternatives so you can cut back ahead of the holidays,” Thacker said. Find ways you can manage your money and reduce expenses to create a spending strategy that works.

Set up a spending plan. How will my finances be affected by this decision? “Most people know they’re probably going to send more compared to the rest of the year,” Thacker said. Setting up a spending plan for larger purchases can help you from falling into temptation.

In true holiday fashion, nearly half of survey respondents said that none of their holiday purchases have been a waste of money. But if you are in the spirit of giving, there are ways to limit the amount of damage done to keep you and your budget happy in the new year.

Methodology: GOBankingRates surveyed 996 Americans from across the country between Oct. 24-Nov. 12, 2019, asking six different questions: (1) Do you plan to do any of the following this year when shopping for the holidays?; (2) What is your budget for your holiday shopping this year?; (3) How much holiday debt do you expect to rack up this year?; (4) If you had to do one of the following in order to afford the holidays this year, which of the following would you do?; (5) Would you consider ever skipping the holidays to save money?; and (6) What has been the biggest waste of money you’ve ever spent during the holiday season? For questions 1, 4 and 6, respondents could select all answers that applied. All respondents had to answer “Yes” to the following screener question: “Do you plan to do any holiday shopping this year?” GOBankingRates used Survata’s survey platform. 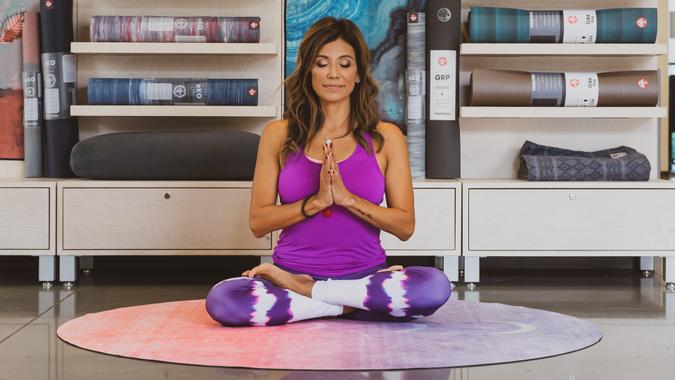 3 Ways To Tackle Holiday Money Stress and Recenter Yourself

Ease your stress with yoga and deep breathing.

> Saving Money > Holiday > Survey: Majority of Shoppers Are Missing Out On Free Money During the Holidays