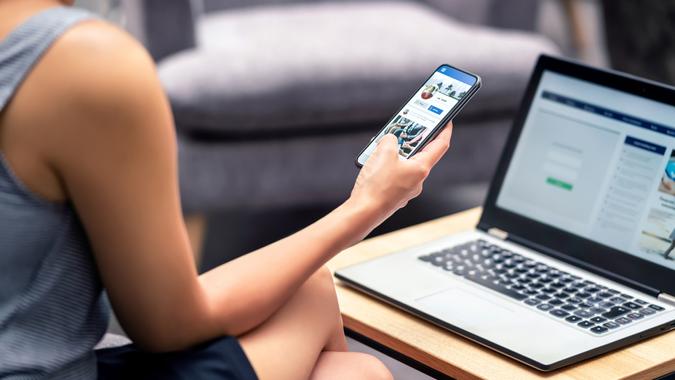 It’s no secret that when businesses face higher operating costs, they respond by raising their own prices to maintain their margins and keep churning out profits. That’s what most retailers have done this year to deal with rising inflation, leaving consumers stuck with the highest prices in four decades. Now many consumers are fighting back by bypassing traditional retailers and buying used items on secondhand sites, otherwise known as “recommerce” sites.

Thrift Shopping: 10 Tips For A Successful Haul
Find: What Valuables Should I Look For at Thrift Stores?

Americans now spend as much time shopping recommerce online as they do browsing social media, according to a new report from OfferUp, an online resale marketplace.

The report, conducted in partnership with GlobalData and based on a May 2022 survey of 2,000 U.S. adults, found that 61% of respondents choose to shop secondhand via online recommerce marketplaces. More than half (58%) plan to increase buying and selling secondhand over the next year or so, and nearly all of them – 93% — cited inflation as the reason.

Secondhand commerce had already been on the rise even before consumer prices started skyrocketing, but much of the growth involved apparel. Today, popular categories include everything from home goods to auto parts. An estimated 272 million Americans now buy and/or sell secondhand.

“While recommerce has become popular in culture with its use for clothing resale, our research found that 76% of items bought and sold pre-owned are not apparel and instead fall into the categories of electronics, furniture, home goods, home improvement, sporting goods, outdoor equipment and auto parts,” OfferUp CEO Todd Dunlap said in the report.

This year’s rise in secondhand commerce is tied to inflation on a couple of fronts, according to Neil Saunders, retail analyst and managing director at GlobalData Retail.

Numerous sites are available to buy and sell used goods, with the most prominent being major e-commerce sites such as Amazon, eBay and Facebook Marketplace. But there are plenty of other options as well. Most make it quick and simple to access items and complete transactions.

For secondhand clothes, some of the leading sites cited by Sustainability Magazine include Depop, which lets you buy items via PayPal; Build a Bundle, which specializes in children’s clothing; and Vinted, which boasts a large community of around 45 million users.

For secondhand furniture, the Home Stratosphere website’s recommendations include Amazon as well as Kaiyo, where you can find high-end furniture; and 1st Dibs, which offers a wide selection of antique and modern furniture.

Scam Alert: Common Scams on OfferUp and How To Avoid Them
Fraud: 9 Facebook Marketplace Scams To Look Out For in 2022

Consumers who want to buy secondhand electronics online can find good deals on major sites such as Amazon, Best Buy and Decluttr, according to the LifeWire website.