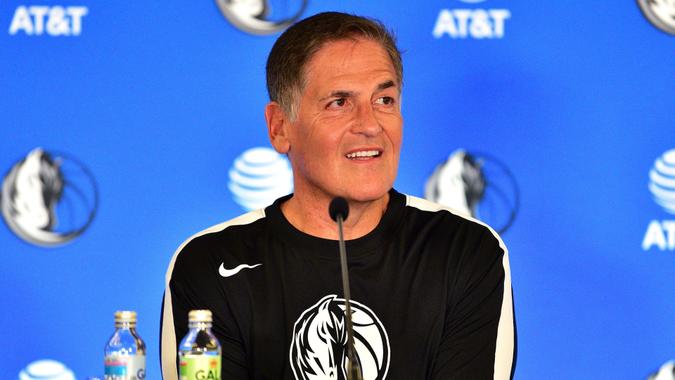 Mark Cuban’s Dallas Mavericks have announced a five-year international partnership with crypto platform Voyager Digital, and to celebrate, the Mavs are giving away free crypto.

Discover: 10 Cheap Cryptocurrencies To Buy
Learn: 20 Genius Things Mark Cuban Says To Do With Your Money

“The Mavs are giving away free bitcoin worth $100 to anyone who downloads the Voyager Digital app until Oct. 30 at 11:59 p.m. CT,” according to a statement.

After downloading the Voyager Digital app, people should create an account using the code MAVS100, deposit $100 and trade a minimum of $10 to unlock the $100 reward.

Voyager CEO Steve Ehrlich told GOBankingRates that he’s thrilled to be working with the Dallas Mavericks and their owner, Mark Cuban. “At the core of the partnership is bringing crypto education and access to Mavs fans, sports fans, and beyond,” he said. “Both of our teams are working hard to build educational and community programs, which will include digital and in-person content that will cover crucial industry topics. We want to drive the adoption of digital assets as a form of trading, payment, and usage. And ultimately, we want to help people achieve true financial freedom and build intergenerational wealth through crypto. Together with the Mavs, we’re delivering crypto for all.”

The five-year partnership has a three-fold mission: make cryptocurrency more accessible through educational and digital programs, plus reach the global audience with activations and create innovative and transformative fan engagement programs, according to a statement.

It’s not the first foray intro crypto for the Mavs. In March, Entrepreneur and Dallas Mavericks owner Cuban said the basketball team would accept Dogecoin for tickets and merchandise.

“The Mavericks have decided to accept Dogecoin as payment for Mavs tickets and merchandise for one very important, earth shattering reason, because we can! Because we can, we have chosen to do so,” Cuban said in a statement on the Mavs website at the time.

Voyager Crypto App Review 2021: Is It Good for Buying and Selling Digital Currencies?
Explore: What Companies Has Mark Cuban Invested In?

Asked whether it was too late to get into crypto at a press conference announcing the deal earlier this week, Cuban said:

“You don’t have to spend a lot of money in order to learn. It’s not like the stock market where it’s almost impossible, except on a few platforms, to spend $10 and get started. My now 12-year-old son got me in Dogecoin when it was less than a penny. I was like “let’s do this” because it’s a cheap way for him to learn how all of this works,” he said according to a transcript of his remarks. “While you have to put in a $100 to get the $100 bonus the next two days, if you don’t have a hundred dollars and you just want to download the app and put in $5 and buy SHIBA INU (SHIB) and Dogecoin (DOGE), there’s a lot of ways to inexpensively start.”