Google Stock: Is It a Buy, Hold or Sell Right Now? 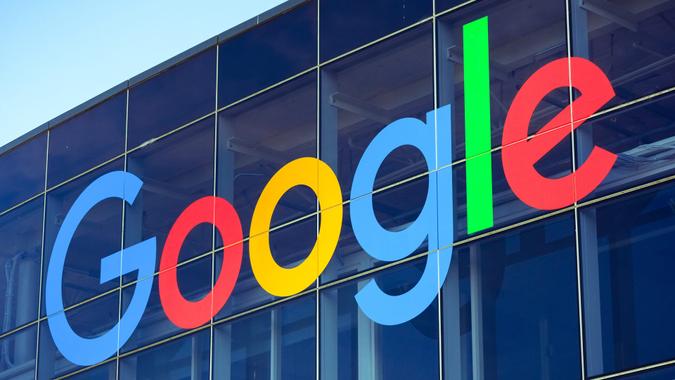 Revenue at the world’s most popular search engine is up, despite, or perhaps even as a result of, the coronavirus pandemic. It grew by over 12% from 2019 to 2020 and over 41% from 2020 to 2021. The stock is on a serious streak as well, leaving investors to guess where the ceiling is.

A Market-Beating Stock — but for How Much Longer?

Alphabet’s stock (Nasdaq: GOOG) has seen a 27% lift over the past 12 months, growing just slightly slower than the S&P 500, which is up about 29% compared to a year ago. Its voting-class counterpart, GOOGL, has seen a similar surge of 28% so far this year. Is the stock tapped out?

Google (GOOGL) currently goes for nearly $2,700 per share, but analysts’ average price target is $3,454.88 and the high target is $3,900, suggesting the stock has plenty of room to grow. The company’s Google Services revenue, which includes advertising revenue and revenue from app sales, in-app purchases and subscriptions to products like YouTube Premium, grew by nearly a third in the fourth quarter of 2021 compared to the corresponding quarter in 2020 — and there are additional business segments at Google — Google Cloud and Other Bets.

Google is no stranger to gargantuan growth; the stock has surged roughly 4,000% since its 2004 debut. But come July, you won’t need to pay thousands of dollars to purchase a single share. That’s when a stock split announced in the Q4 2021 earnings release goes into effect. At that time, current shareholders will receive 19 additional shares for every share they own, and new investors will be able to purchase shares for a reduced price. “Reduced” is not the same as discounted, however — the number of outstanding shares will increase by a factor of 20 when the split takes effect.

Looking ahead, the question is whether Google’s current business goals and obstacles will be able to support further growth or whether a contraction could potentially be on the horizon.

The Road Ahead for Google

Gaining a Foothold in Retail

Google opened its first brick-and-mortar store in June 2021, in New York’s Chelsea neighborhood. Although hardware sales and support aren’t the company’s bread and butter — digital ad revenue makes up the bulk of the company’s revenue — the new store reflects a growing commitment to retail. The investment seems to be paying off, and not just with product sales. Philipp Schindler, Google’s chief business officer, said during the Q4 earnings call that retail was the biggest contributor to year-over-year ad growth.

Google is working on its privacy sandbox — an initiative aimed at enhancing privacy on the web. As part of that, the company planned to dismantle third-party cookies, which are historically the best way for advertisers to track and profile a user online.

Although Google’s effort tapped into existing sentiment in the industry about the need to replace third-party cookies with a solution better suited to safeguarding user privacy, there was uncertainty about what that should look like. FLoC aimed to group users by their online behavior and assign each group a label. Not everyone was on board, and some speculated that grouping and labeling users could be difficult and potentially dangerous.

During the Q4 earnings call, CEO Sundar Pichai introduced a new sandbox proposal called Topics API, which will replace FLoC. Google considered feedback from FLoC in the creation of Topics. The API lets advertisers display ads to users based on inferences made by the websites they visit, but in a more private way than with FLoC. Schindler said Topics should be available for testing by the end of the first quarter of 2022.

Google, like other tech companies, including Meta (Facebook), is calling for federal privacy regulations to improve protections, especially for children, while preserving the ability of U.S. companies to compete.

In the last several months, Google made its business collaboration tool, Workspace — formerly called G Suite — available to everyone. The new offering, Workspace Individual, includes enhanced email and calendars and longer Google Meet meetings for a $10 monthly fee — $4 more than the entry-level Workspace for business.

The company has also said that it’s working on new methods of classifying skin tones in an effort to make products, such as wearable sensors and facial recognition systems, less biased and more inclusive.

In October, Google announced a plan to create a more “shoppable” experience for users who watch YouTube on their TVs. Expanded video action campaigns will make it easier for advertisers to reach consumers and give them the means to measure conversions.

Google introduced several new insight tools last quarter, including a machine-learning feature to help businesses predict trends. In addition, it announced that Performance Max, a news campaign that lets advertisers promote their businesses across all of Google’s services from a single campaign, went global in November.

Domestically, Google is facing an antitrust investigation led by Texas Attorney General Ken Paxton. The company is also under scrutiny in Europe, where it has faced a multitude of fines for various violations.

Google is also concerned about the possibility of new antitrust legislation. The company launched a website warning its customers that proposed regulations in Congress “would have unintended consequences for your business and could disrupt many of the digital tools you rely on every day.”

Google, along with most employers, is preparing to bring its workforce back to campus — with mixed results so far. After some false starts, the company set Jan. 10 as the return-to-office date but reversed the decision amid the rapid spread of the omicron variant of COVID-19 and growing dissent regarding vaccine requirements. According to an email shared with employees and seen and reported by CNBC, the company opted to wait until the new year “to assess when offices can safely return to a ‘stable, long-term working environment.'” Although employees weren’t required to return to the office even in a hybrid arrangement on Jan. 10, each location can establish its own timelines for local employees to return, CNBC reported.

Above and beyond the return to office life, some of Google’s top leaders recently shared their concerns via a June 2021 article in The New York Times. Fifteen executives, some currently employed at Google and some formerly, spoke to the newspaper about growing bureaucracy at Google, fears of innovation going by the wayside and an unhealthy focus on public perception.

Is Google Stock a Buy, Sell or Hold?

Google results have been favorable to earnings consensus estimates for the past five quarters. Thirty-eight out of 43 analysts on Yahoo Finance rate GOOGL a “buy” or “strong buy,” and a Nasdaq analysis based on 34 analysts, including J.P. Morgan, Oppenheimer and Morgan Stanley, rate the stock a “strong buy.” Overall, the stock appears to be a green light, or a worthwhile investment, right now.

A Company Under Close Watch — Now and Always

Google has been a staple in our digital lives for a long time now, with no end in sight. As such, it’s a company that’s likely to fall under close observation and scrutiny. Investors who are interested in Google stock should be prepared for the ups and downs that are likely to result from such scrutiny and should ideally be resolved to take the long view.