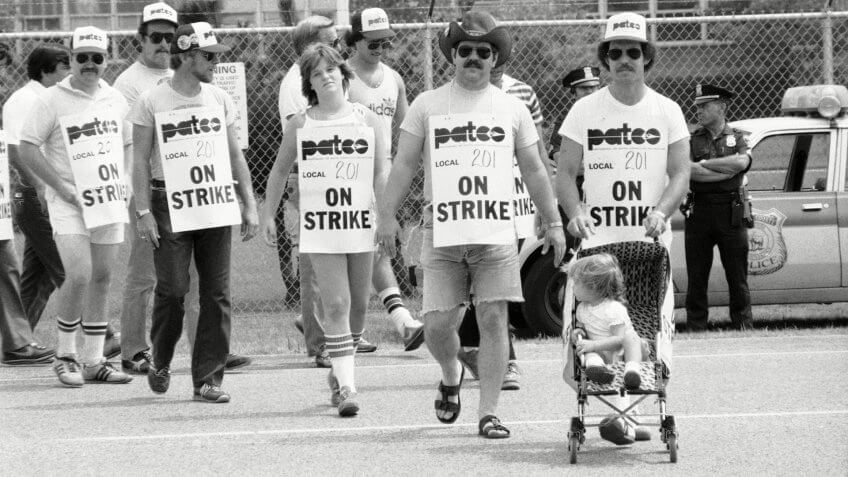 Labor Day is meant to be a day of relaxation for working people (and you can score some great car deals, too). But the events leading up to the creation of this holiday were no picnic. In fact, one of the bloodiest episodes in labor history happened around the time President Grover Cleveland signed a bill on June 28, 1894, to establish Labor Day as a national holiday.

Cleveland had sent federal troops to Chicago to break up a strike of railway workers. When they fought back, several were shot by National Guardsmen. Unfortunately, this was just one of the many battles workers and labor unions have fought over the years to secure better working conditions and higher wages.

Keep reading to learn more about strikes that have changed U.S. history and spawned laws to protect workers.

The first recorded strike in U.S. history happened well before the labor movement began. About two dozen journeyman tailors waged a walkout in 1768 to protest a wage reduction, according to Tim McNeese’s book “The Labor Movement: Unionizing America.” The striking tailors defied the master tailors they worked for by advertising their services in local newspapers and setting higher wages for themselves. There had been other earlier labor protests, but the tailors’ turnout more closely resembled modern-day strikes, McNeese wrote.

Be Aware: 10 Sneaky Ways Employers Steal From Your Paycheck 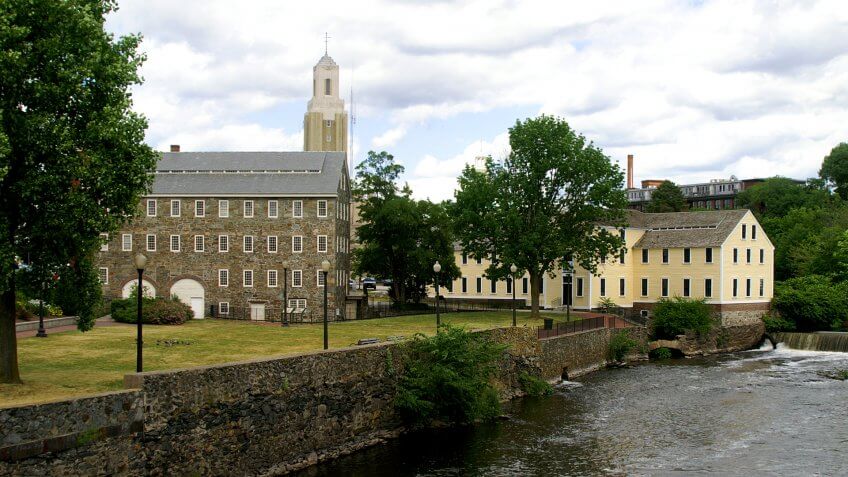 More than 100 women walked off their jobs on May 26, 1824, when the owners of the cotton mill where they worked in Pawtucket, R.I., decided to cut wages by 25 percent and increase the workday from 12 hours to 13 hours, according to the New England Historical Society. Workers from other mills joined the strike, and the number of strikers grew to more than 500. The strike continued for about a week, until the mill owners agreed to a compromise.

Find Out: States With the Biggest (and Smallest) Gender Wage Gap 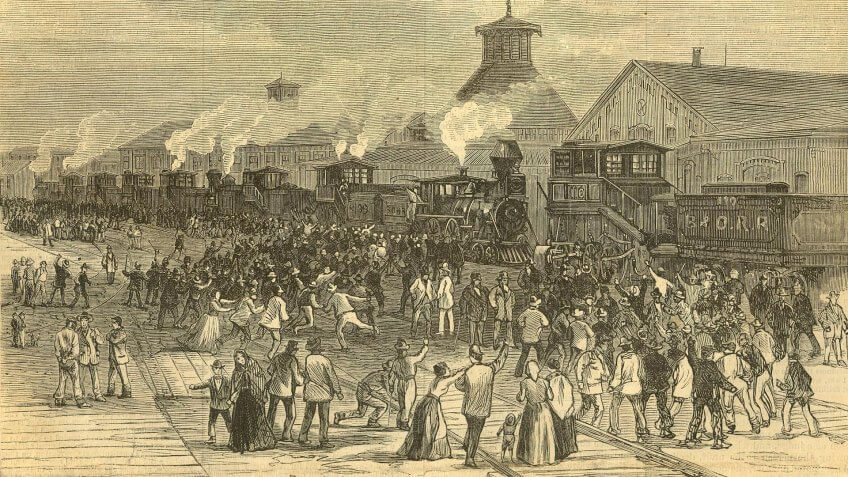 More than half of the rail traffic in the U.S. stopped as more than 100,000 workers in several states joined the Great Railroad Strike of 1887. The strike started in Martinsburg, W.Va., when Baltimore and Ohio Railroad workers protested a wage cut. It eventually spread throughout the Northeast and Midwest. Federal troops were called in to end the strikes so the trains would start running again, and unfortunately, the strike failed to bring about direct improvements for railroad workers.

Here’s what you should do if you face wage cuts. 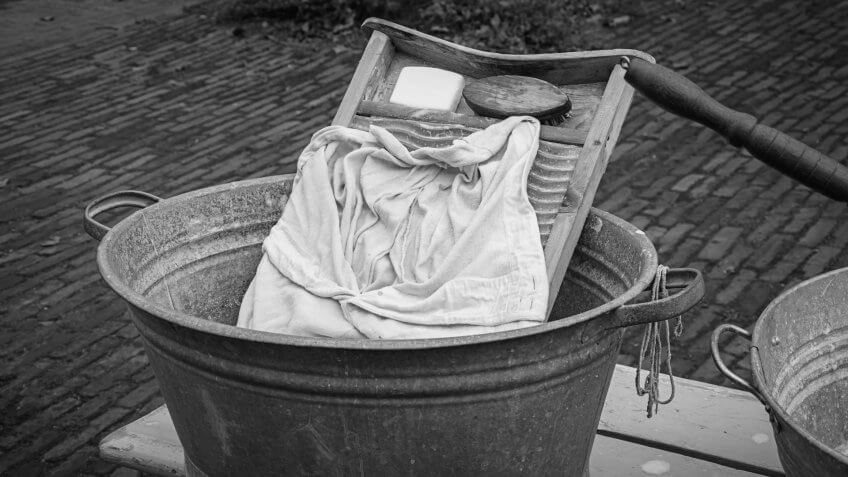 This strike helped advance the rights of working black women in the South, according to the AFL-CIO. About 20 black laundry washerwomen formed the Washing Society trade group to advocate for higher wages, recruited about 3,000 members and called a strike. Despite arrests and fines, the strikers continued. 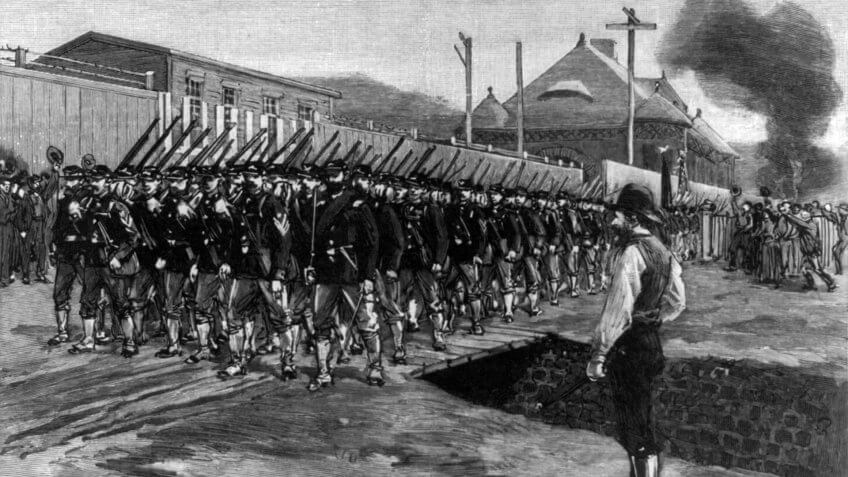 The AFL-CIO claims that the Homestead Strike left scars “that have never fully healed after five generations.” The strike, by members of the Amalgamated Association of Iron and Steel Workers and other non-union workers at the Carnegie Steel Company, began in 1892, after the plant’s manager, Henry Clay Frick, increased production demands. It turned violent six days later after Frick hired 300 agents from the Pinkerton National Detective Agency to break up the strike. The National Guard was then sent in, the strike lost momentum and the union collapsed.

This strike is an example of when walking off the job failed to win workers better pay and shorter work shifts. In fact, the workers’ wages at Carnegie Steel decreased and the length of their workdays increased, according to the AFL-CIO. Union membership shrank dramatically after this failed strike. 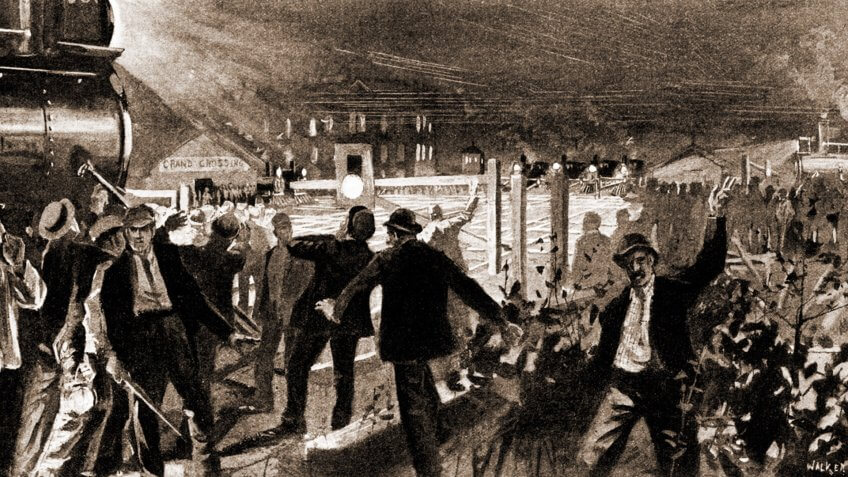 Like the Great Railroad Strike of 1887, this railroad strike also had a big impact on U.S. history. Railroad traffic west of Chicago basically shut down in June and July 1894 as 250,000 workers refused to handle Pullman railroad cars because the Pullman Palace Car Company slashed its workers’ wages by 25 percent. The strike ended when the U.S. attorney general got an injunction against leaders of the American Railway Union – the first time an injunction was used to break a strike – and President Grover Cleveland sent in federal troops.

However, as the strike was going on, Congress passed legislation that created Labor Day as a national holiday and Cleveland signed it into law. 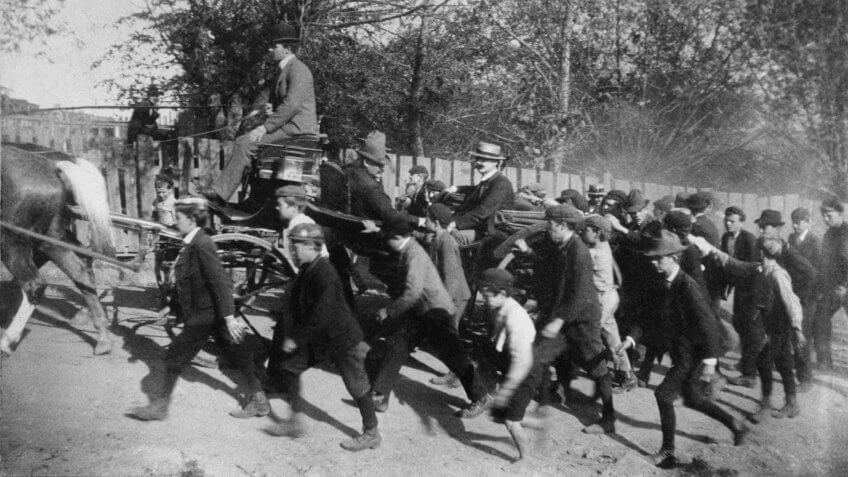 This strike marked the first time the U.S. government played the role of peacemaker in a labor dispute, according to the Labor Department. Previously, it had sided with employers.

Miners in the anthracite coal fields of Pennsylvania went on strike on May 12, 1902, to demand higher pay and shorter hours. (Today, coal miners are actually reasonably well paid, even if there aren’t many left.) President Theodore Roosevelt called a meeting on Oct. 3 between representatives of the United Mine Workers and mine management, but they didn’t reach a deal. The strike didn’t end until Oct. 23, 1902, after banker J.P. Morgan helped negotiate a deal between the miners and mine operators. 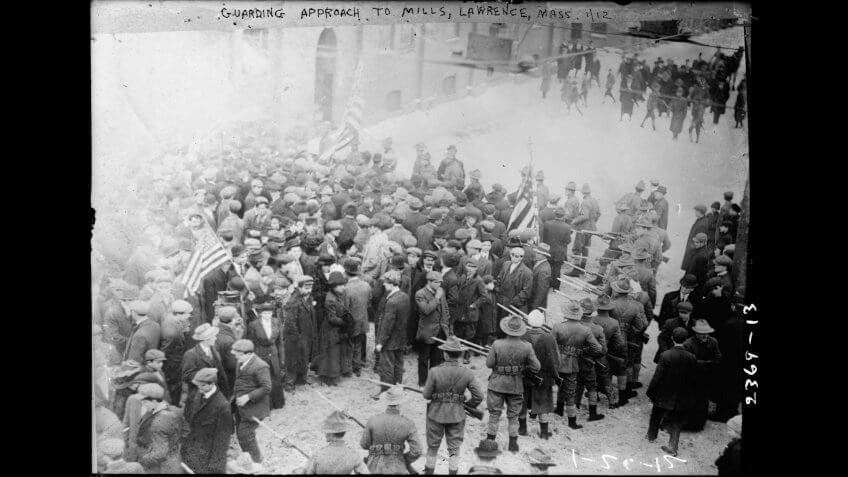 On Jan. 11, 1912, workers at a textile mill in Lawrence, Mass., walked off the job to protest a reduction in pay. Not only did they stop working, they sabotaged equipment at the mill to ensure that work couldn’t continue. The strikers quickly grew in number from a few hundred to several thousand, and leaders of the national Industrial Workers of the World union arrived to help organize the strikers.

The strike – which lasted 10 weeks — became known as the Bread and Roses strike because workers held signs that said, “We Want Bread, But Roses Too!” It got national media coverage and sparked Congressional hearings that led to an investigation of conditions in factories nationwide. The strikers’ demands were met, and their wages were raised – as were the wages of textile workers throughout New England.

9/15
Library of Congress; The Crowley / iStock.com

On Jan. 1, 1937, the United Auto Workers organized a sit-down strike at a General Motors production facility in Flint, Mich., and occupied the plant for 44 days. Nearly 200,000 employees stopped working, and production at the facility dropped from 53,000 cars a week to 1,500, according to AutoBlog. The strike ended after GM agreed to increase workers’ wages and improve working conditions. The workers’ victory prompted strikes at other auto manufacturing facilities, and UAW membership soared from 30,000 to 500,000 within a year.

Related: See Which Jobs Still Come With a Pension 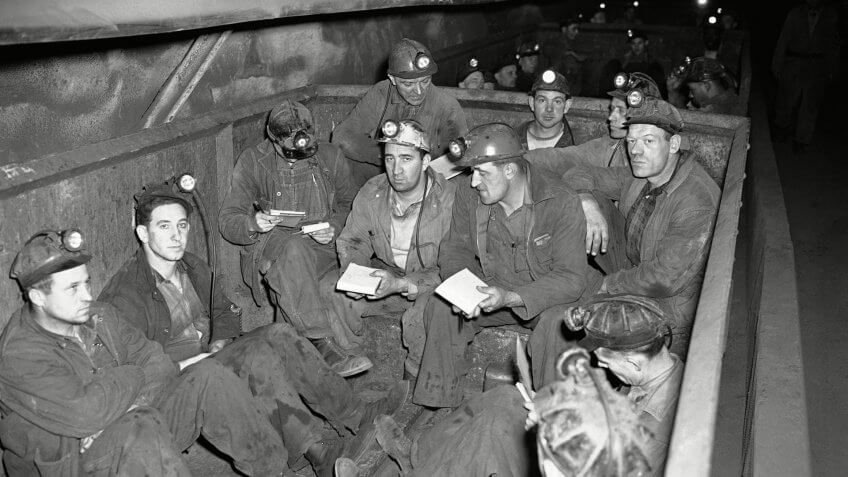 The effects of the United Mine Workers’ strike could be felt across the nation. When wage negotiations between the United Mine Workers and bituminous coal mine operators broke down, more than 300,000 miners walked off the job on April 1, 1946. So little coal was being produced that there were electricity shortages in several states.

The government seized the mines on May 22, 1946, but the strike didn’t end until a week later when the U.S. government struck a deal — known as the Krug-Lewis Agreement — with the United Mine Workers of America. The agreement established health and retirement funds for mine workers. 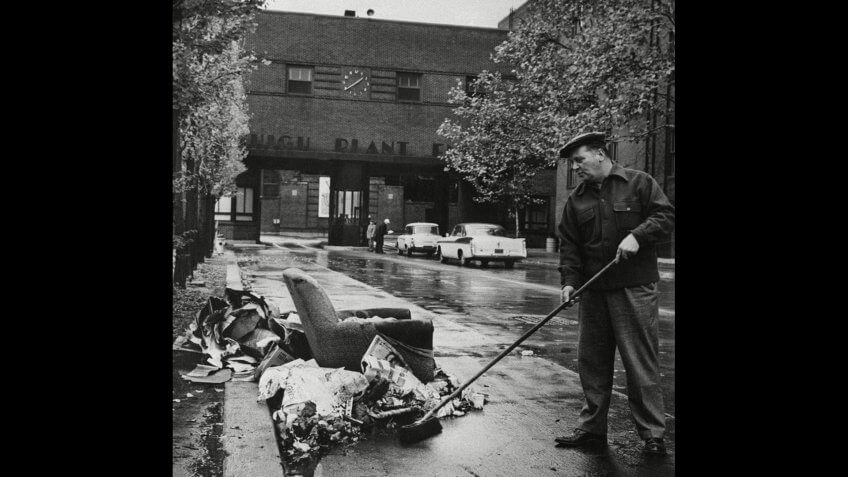 About 500,000 United Steelworkers of America members went on strike in 1959 when contract negotiations between the union and steel mills failed. The 116-day strike caused steel shortages in the auto industry, and automakers threatened to lay off thousands of workers, according to Politico. As a result of the strike, the union’s contract demands were met. But the strike ended up permanently damaging the domestic steel industry as manufacturers turned to imported steel. 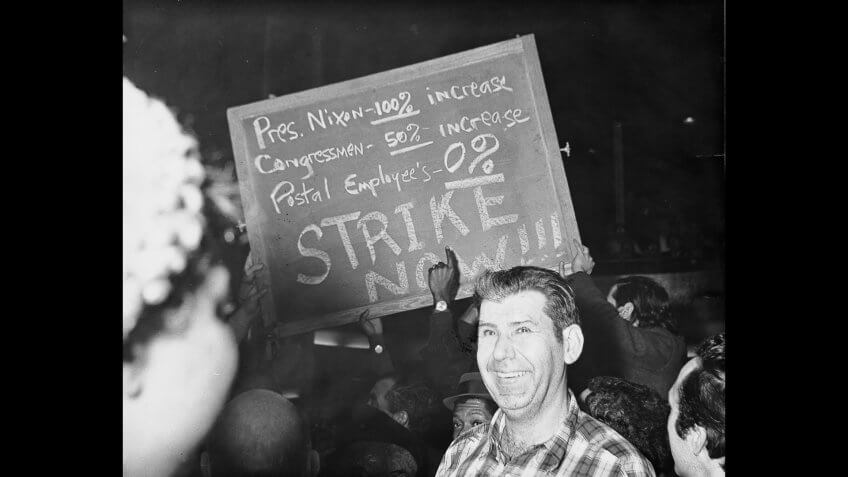 On March 18, 1970, New York postal workers went on strike to protest a Congressional committee vote to limit postal workers’ wage increase to 5.4 percent while Congress members were getting 41 percent pay hike, according to the U.S. Postal Service Office of the Inspector General. Within days, about 152,000 postal workers were striking in 671 locations. As a result of the disruption in mail delivery, about 9,000 draft notices weren’t delivered and tax refunds and census forms were delayed.

Negotiations to end the strike resulted in a pay raise for postal workers and led to the Postal Reorganization Act, which turned the postal service into a government-owned corporation. 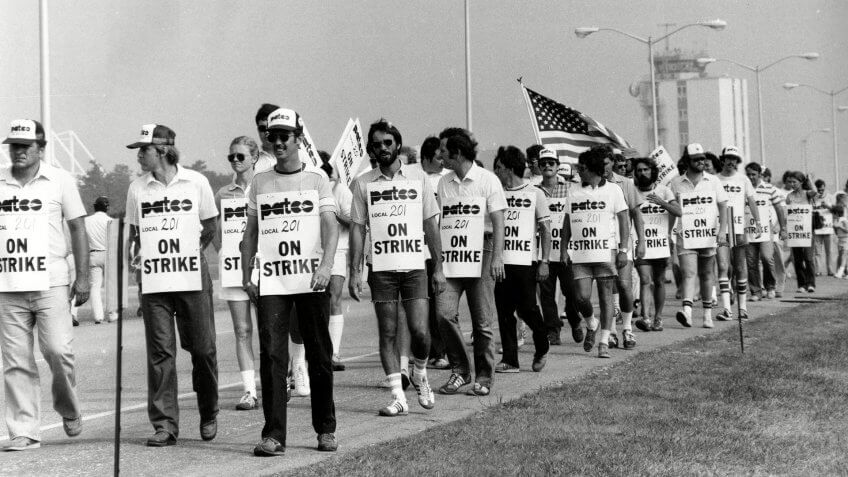 On Aug. 3, 1981, about 13,000 air traffic controllers went on strike when negotiations between the Professional Air Traffic Controllers and the Federal Aviation Administration over higher wages and a shorter work week failed. About 7,000 flights were canceled as a result of the strike. But the real fallout from the strike came when President Ronald Reagan fired most of the striking workers – citing a U.S. law that banned strikes by government unions.

Reagan’s move was considered one of the biggest blows to the bargaining power of labor unions. As other employers followed suit and became more willing to fire striking workers, the annual number of major strikes in the U.S. plummeted.

Prepare: How to Survive a Layoff 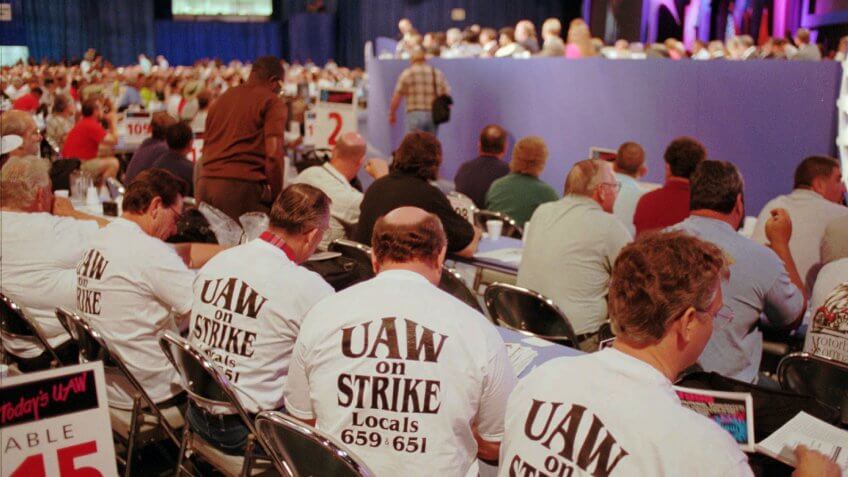 On June 5, 1998, 3,400 workers at a General Motors metal-stamping factory in Flint, Mich., walked off the job because GM had broken a commitment to upgrade the facility. Then 5,800 workers at a GM parts plant joined them to protest outsourcing to non-union plants.

The 54-day strike by members of United Auto Workers union stopped production at GM plants across the U.S., which led to the layoffs of about 193,000 non-union workers and cost the auto manufacturer $2 billion profits, according to AutoBlog. In an agreement that ended the strike, GM agreed invest in its American factories and workers agreed to increase output. But it failed to prevent the decline of the auto industry in Flint, where the auto manufacturing workforce is now a fraction of what it was before the strike. Today, the Flint area is finally starting to bounce back. 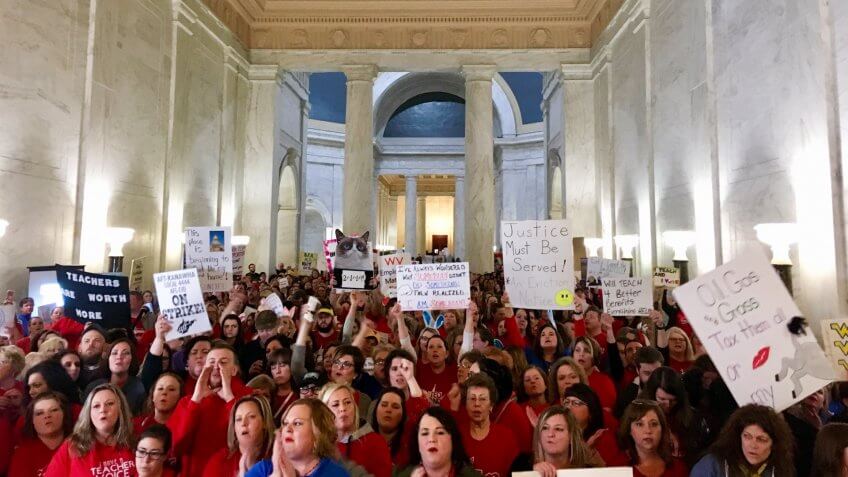 West Virginia’s 20,000 teachers launched a statewide walkout on Feb. 22 to rally for a pay raise and to improve their health coverage, according to CNN. The strike lasted nine days until the state legislature passed a 5 percent pay raise for all state workers.

The West Virginia walkout sparked teachers’ strikes in Arizona, Colorado, Kentucky and Oklahoma. Although the outcomes have been mixed, some are suggesting that the teachers’ strikes could mark the comeback of organized labor – and bring about improvements to the U.S. education system.

Click through to learn why it’s good news that people are quitting their jobs. 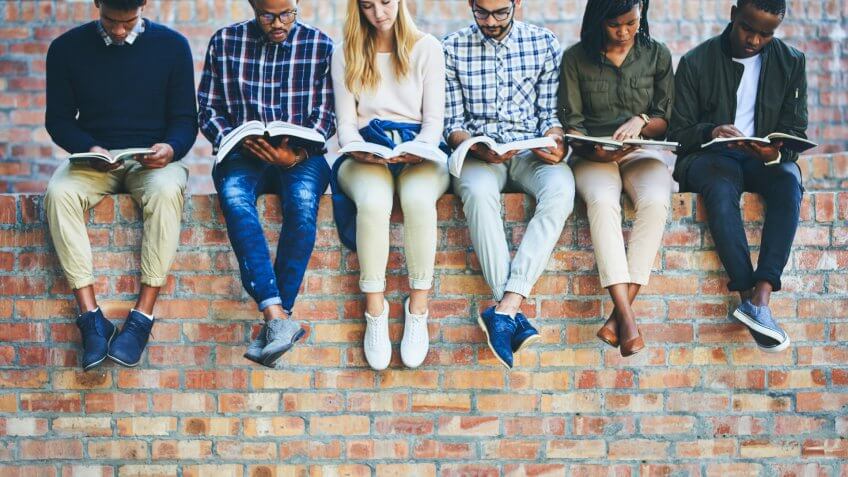 The Starting Salary Out of the 30 Best Colleges

The best schools might not offer the highest starting salaries.