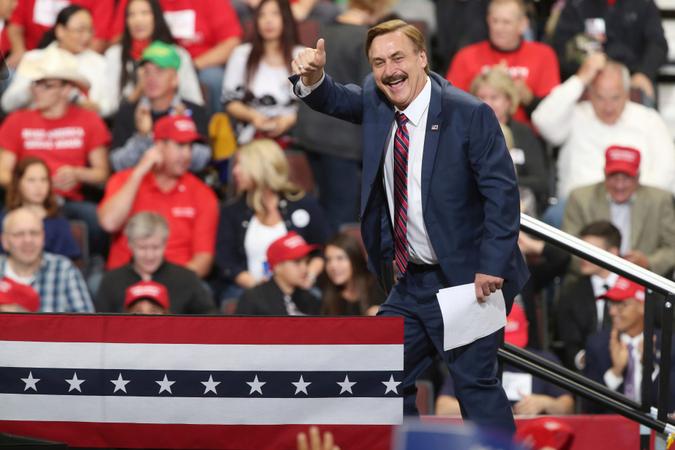 See: Impeachment by the Numbers – 58% of Americans Think Donald Trump Should Have Been Convicted
Find: Fox News and 25 More Companies That Faced Public Backlash

The complaint, filed in the U.S. District Court for the District of Columbia, is seeking over $1.3 billion in damages.

“Despite repeated warnings and efforts to share the facts with him, Mr. Lindell has continued to maliciously spread false claims about Dominion, each time giving empty assurances that he would come forward with overwhelming proof,” Dominion CEO John Poulos said in a statement. “These claims have caused irreparable harm to Dominion’s good reputation and threatened the safety of our employees and customers. Moreover, Mr. Lindell’s lies have undermined trust in American democracy and tarnished the hard work of local election officials.”

Poulos added that, “no amount of money can repair the damage that’s been done by these lies,” which he says are are easily disproved. “Hundreds of documented audits and recounts have proven that Dominion machines accurately counted votes. We look forward to proving these facts in a court of law,” he said in the statement.

See: Supreme Court: Trump Must Turn Over Tax Records
Find: Enron and the 24 Other Most Epic Corporate Downfalls of All Time

According to the court papers, “after hitting the jackpot with Donald Trump’s endorsement for MyPillow and after a million-dollar bet on Fox News ads had paid out handsome returns, Michael Lindell exploited another chance to boost sales: marketing MyPillow to people who would tune in and attend rallies to hear Lindell tell the “Big Lie” that Dominion had stolen the 2020 election.”

The suit alleges that while Lindell knew there was no real evidence supporting his claims, he is a “talented salesman and former professional card counter,” and he sells the lie to this day because the lie sells pillows.

“MyPillow’s defamatory marketing campaign — with promo codes like “FightforTrump,” “45,” “Proof,” and “QAnon” — has increased MyPillow sales by 30-40% and continues duping people into redirecting their election-lie outrage into pillow purchases,” according to the court papers.

In addition, Dominion says that Lindell promoted MyPillow’s sponsorship of the “March for Trump” bus tour on Twitter and helped disseminate “the Big Lie that the election had been stolen” by speaking at rallies and “telling a fable that there were ‘algorithms’ in Dominion machines programmed to steal votes from Trump and that the fraud was discovered in an ‘election night miracle’ when Trump’s lead was so great that it broke the algorithms.”

The suit says that instead of retracting his lies, “Lindell — a multimillionaire with a nearly unlimited ability to broadcast his preferred messages on conservative media — whined that he was being “censored” and “attacked” and produced a “docu-movie” featuring shady characters and fake documents sourced from dark corners of the internet.”

Dominion says it is bringing this action “to vindicate the company’s rights, to recover damages, to seek a narrowly tailored injunction, to stand up for itself and its employees, and to stop Lindell and MyPillow from further profiting at Dominion’s expense,” according to the court papers.