Starbucks Net Worth: How Much Is Starbucks Worth and Is It Worth Investing? 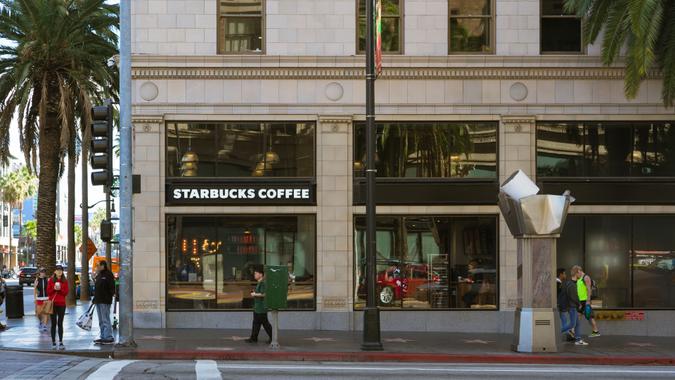 Starbucks has made specialty coffee mainstream, exploding from a few shops into a seemingly ubiquitous coffee and merchandising empire with more than 33,000 stores across the globe. However, labor shortages and the ongoing effects of the pandemic, especially on global operations, might give prospective investors pause before making a venti investment in Starbucks stock.

What Is Starbucks Worth?

Here’s the company profile on Starbucks.

Market capitalization is determined by the total dollar value of a company’s outstanding shares, which helps investors determine the relative size of a company. Volatility in Starbucks’ stock price over the past year has resulted in corresponding changes in its market cap. The company’s stock had been trending steadily upward until the COVID-19 outbreak took hold in important markets like China — its second-largest, after the U.S. — before spreading globally.

Although the stock dipped sharply at the beginning of the pandemic and the company continues to feel the impact of labor shortages and other fallout, shares came back stronger than ever, hitting an all-time-high closing price at the beginning of 2021. However, Starbucks has struggled to hold onto those gains and is now trading near the lowest price it’s seen in nearly two years.

Market caps offer a view of what the market values a company at, but that value is also susceptible to change on an almost hourly basis due to external market forces and investors fighting over the value of shares.

To bypass market volatility, the GOBankingRates Evaluation calculates a company’s net worth based on recent annual reports of income and profit, while also taking into consideration its assets and liabilities.

Based on its revenue and profits from the past three years, Starbucks’ net worth is $52.83 billion.

Starbucks went public in June 1992 at $17 per share. Starting with 165 locations upon going public, the company has since dramatically increased its brick-and-mortar presence. Starbucks’ continuous growth has had some thinking the company overexpanded from the mid-2000s on.

Consequently, Starbucks announced in a June 2018 press release that it would close 150 stores in “densely penetrated markets,” although the coffee retailer still had success expanding internationally.

Starbucks hasn’t limited its expansion — or overexpansion — to stores. The company sells way more than just coffee; it also offers a food menu and sells Starbucks tumblers, mugs, brewing equipment and accessories, tote bags and apparel. Its branded line of beverages is also sold in grocery and retailer outlets — and it recently expanded those products’ reach via a collaboration with Nestle to make coffee beverages available in Southeast Asia, Oceana and Latin America.

As Starbucks has grown, the company has explored new ways to improve its customer experience by offering trendy or seasonal items, new ordering and purchase options — such as its retail rewards credit card, plus mobile pay and mobile ordering for in-store pickup — and delivery through third parties. The Starbucks app lets customers pay with their phones, find stores and keep track of Starbucks Rewards, a points-per-purchase program that eventually adds up to free food and drinks.

As of November 2021, customers can reload their cards using cryptocurrency. A crypto conversion app called Bakkt App, which must be downloaded separately, converts the crypto into U.S. dollars. Customers can then add the dollars to their Starbucks card.

Starbucks reported a 19.3% increase in revenue, to 8.05 billion, beating the $7.95 billion analysts had expected, CNBC reported. However, the company fell short on earnings per share, reporting 72 cents EPS vs. the 80 cents expected, due to cost pressures resulting from the pandemic.

Revenue from the North American segment reached 5.7 billion, a 23% increase from the same quarter last year. Chief Financial Officer Rachel Marie Ruggeri noted during the Feb. 1 earnings call that an 18% increase in comparable store sales was the primary driver.

Company-operated stores drove 91% of North American net revenue last quarter, nearly matching the 91.6% reported the same quarter a year ago. Licensed store revenue increased from 8.3% to 9%. Internationally, company-owned stores comprised 80.4% of revenue, down from 85.7% year over year. Licensed stores’ share increased from 13.4% to 17.9%.

Johnson acknowledged during the earnings call that COVID-19 disruptions continue to affect the U.S. and China, Starbucks’ two lead markets. However, he noted that global consumer demand is strengthening, and the company continues to focus on employee and customer safety despite the dampening effect on earnings.

When Starbucks issued its guidance for the fiscal year 2022 in its fourth-quarter 2021 earnings report, it said it expected to see global comparable store sales growth increase in the high single digits and global net new Starbucks stores increase by 2,000. In addition, it anticipated global revenue between $32.35 billion and $33.08 billion — a solid increase over its $29.1 billion revenue for 2021. During the first-quarter 2022 earnings call, Ruggeri reiterated Starbucks’ comparable store sales growth and revenue guidance but revised its earlier margin and earnings guidance to reflect high inflation levels and an industry-wide labor shortage.

Last year, the company announced that it would increase wages in 2022 to attract and retain talent. By this summer, all hourly retail workers in the U.S. will average almost $17 an hour.

One way Starbucks encourages stability in its share price is by buying back stock, thereby reducing the number of outstanding shares. Between the buybacks and dividends, Starbucks still expects to return $20 billion to shareholders over the next three years.