Supply Chain Loophole: Why Amazon’s Use of Private Cargos and Planes Is Working 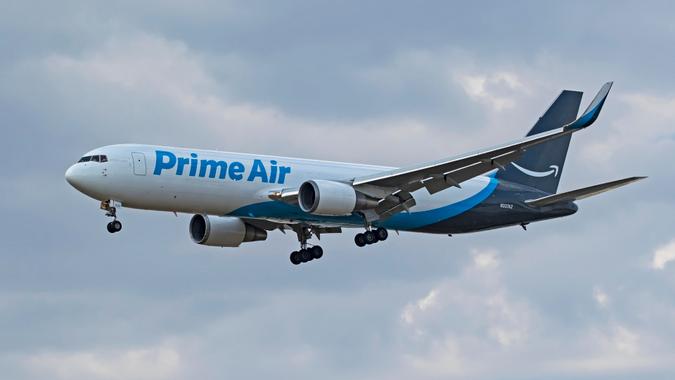 While Amazon started chartering private ships and planes a few years ago, this early move is proving fruitful amid lingering supply chain disruptions.

Explore: This Free Tool Automatically Checks for the Best Deal on Amazon
Compare: Target, Amazon and 4 More Retailers That Will Reward You for Turning In Your Old Stuff

By chartering private cargo vessels, Amazon can control where its goods are transported, avoiding the most congested ports, according to CNBC.

“Who else would think of putting something going into an obscure port in Washington, and then trucking it down to L.A.? Most people are thinking, well, just bring the ship into L.A. But then you’re experiencing those two-week and three-weeks delay. So Amazon’s really taken advantage of some of the niche strategies I believe that the market needs to employ,” ocean freight analyst Steve Ferreira told the news organization.

CNBC reported that Amazon has been on a spending spree to control as much of the shipping process as possible, spending more than $61 billion on shipping in 2020 — which was up from just under $38 billion in 2019. Now, Amazon is shipping 72% of its own packages, up from less than 47% in 2019, CNBC reported, and has even begun taking control at the first step of the shipping journey by making its own 53-foot cargo containers in China.

Containers are in short supply, with long wait times and prices surging from less than $2,000 before the pandemic to $20,000 today.

Last year, the company also started chartering aircrafts, Bloomberg reported. Most air freight is carried in the bellies of passenger jets, but when Covid-19 restricted travel, Amazon moved quickly to replace the lost space with cargo planes. This effort complements Amazon Air, the company’s fleet of 85 planes that move inventory between 40 airports in the U.S. and has expanded to Germany, according to Bloomberg.

Other major retailers are also chartering their own cargos to circumvent the supply chain issues, including Walmart, Costco, Home Depot, Ikea and Target, according to CNBC.

“The real purpose of these vessels when they were built was not containers. It was really lumber, chemicals, grain, agricultural products. But because of the ingenuity and creativity and lack of space, Amazon and many other smart people have quickly figured out how to convert some of these multipurpose vessels to container,” Ferreira told CNBC.