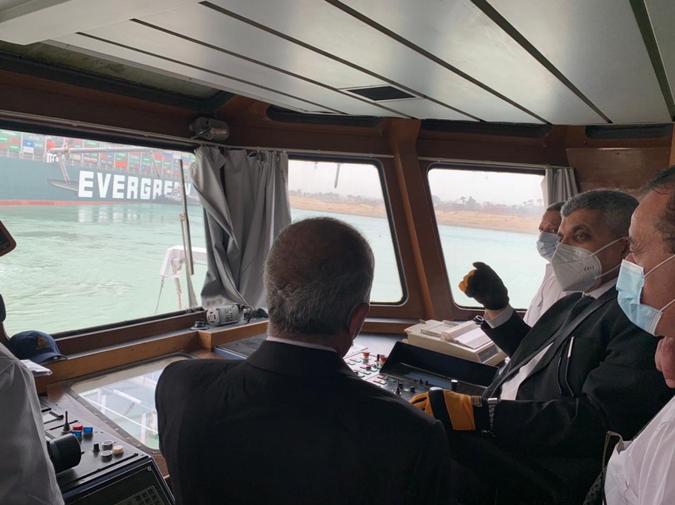 A massive 400-meter —  1,312-ft. — cargo container ship, the Ever Given, beached sideways and is blocking the Suez Canal, blocking all traffic.

“Efforts continued this morning…to float the 199,489 GT container vessel which ran aground at km 151 of the Suez Canal yesterday, blocking the waterway. Suez Canal tugs were working to free the 400 metre LOA laden vessel but wind conditions and its size were hindering the operation,” according to the website of GAC, a shipping agent.

“According to information from the Suez Canal Authority, the grounded vessel has been partially refloated and is now alongside the Canal bank. Convoys and traffic are expected to resume as soon as vessel is towed to another position,” the shipping agent added.

According to The New York Times, if the authorities in Egypt are able to free the Ever Given from the channel within two to three days, “the episode will likely prove a minor inconvenience to the shipping industry. Shipping companies generally build in extra days to their schedules to account for delays.”

See: 18 Deadly Corporate Mistakes and the Companies That Paid the Price
Find: These Are the Most Unstable Industries in the US Right Now

“But if the ship’s extraction takes longer, it could pose a substantial risk for an already-overwhelmed industry,” according to the NYT. Global maritime trade has taken a hit over the last year because of the pandemic, pushing Egypt’s revenues from the canal down 3% to $5.61 billion in 2020, the NYT reports.

“The Suez Canal will not spare any efforts to restore navigation and to serve the movement of global trade,” Lt. General Osama Rabie, the head of the canal authority, said in a statement, according to the NYT.

Social media lit up over the absurdity of the situation.

but you certainly aren't having as bad a day as the captain who accidently parallel parked their ship across the Suez canal, causing a global shipping traffic jam of epic proportions pic.twitter.com/rwgDbHEfi4
— Morning Brew ☕️ (@MorningBrew) March 24, 2021

It’s 2021 and the world economy is frozen, watching a container ship in the Suez Canal do the “Austin Powers” for 3 days #Evergreen #EverGiven pic.twitter.com/GQUaEnLA8D
— Derek Fox (@partialobs) March 24, 2021

Those blue blobs are all the ships waiting in vain to cross the Suez Canal pic.twitter.com/46skeOUlt4
— Dani Burger (@daniburgz) March 24, 2021

Bloomberg adds that the disruption comes at a time when oil prices were already volatile, as crude surged above $70 a barrel earlier this month on Saudi production cuts, only to slump close to $60 this week due to setbacks in Europe’s coronavirus vaccine program.

And according to Business Insider, oil rose as much as 4% on Wednesday after the incident.

“Overall, the price of oil is set to fall for the third consecutive week this week. Another round of lockdowns in Europe could threaten the recovery in demand growth and have undermined some of the recent strength in the oil market,” according to Business Insider.