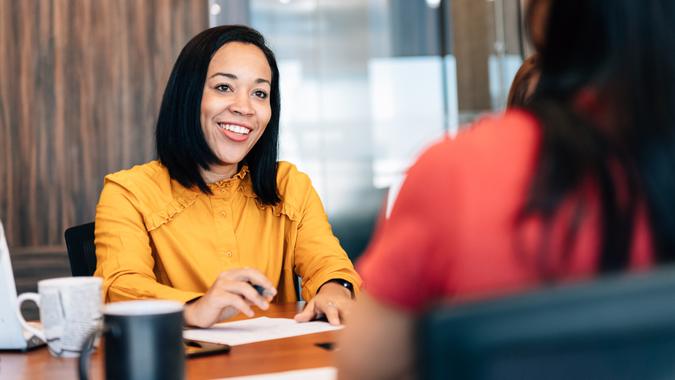 It’s probably safe to say that salary negotiations at job interviews are well outside of most people’s comfort zones. But if you do it tactfully and at the right time, there’s usually very little to lose and often a whole lot to gain.

GOBankingRates heard from many experts about the touchy subject of asking for more money, and a few common themes emerged. Here’s what you need to know for your next negotiation.

Check Out: 10 Unexpected Work-From-Home Jobs You Can Do Right Now
Read: 25 Tried-and-True Jobs That Will Last Through Any Recession

Three Things to Keep in Mind No Matter Your Field

The first point of consensus was the importance of researching the position and what it tends to pay people with your level of experience in your geographic region. Payscale, Glassdoor, and other top salary-themed career sites are a good place to start, as is the Bureau of Labor Statistics.

Second, have the resume to back up your request. Every job has a spectrum of potential salaries. If you’re asking for something on the high end, be able to point to things you’ve done to command that premium. In the private sector, try to tie past accomplishments to revenue — how did you help your last employer make more money?

Finally, most experts agreed that some employers negotiate salaries and some don’t. Those who do will likely start low presuming that you’ll go high, same as any other negotiation. Those who don’t are aware of the dynamic and won’t be surprised or offended if you ask for more than they’re offering.

In short, if you know the market value of your labor, a reasonable employer will not turn away a strong candidate for making a good-faith effort to earn a little more money.

Be Prepared: What It’s Like To Job Hunt During a Pandemic

They Might Bring it Up First — Be Ready to Counterpunch

If you’re stressing out about when to make your move, there’s good news — it’s likely that your interviewer will beat you to it.

“During the initial interview, you will be asked right away what your salary expectations are,” said Liz Hogan, content outreach manager and CPRW at Find My Profession. “The employer is trying to find out if they can afford you and how much value you put to the work you do.”

Use the moment as an opportunity to show that you have, in fact, done your homework and that you know your way around the industry.

“Being able to confidently answer the question, ‘So, how much would you be expecting, salary-wise?’ will reflect positively on your knowledge of the industry and certainty of your skills,” said Christen Costa, CEO of Gadget Review.

See: How To Interview For a Job Over Zoom

If Not, the Right Time Is… Well, That Depends

So, you’ve done your homework and you’re going in confident — but when, exactly do you raise the touchy subject of money if they don’t bring it up first? Unfortunately, there is no one right answer.

“There are two phases when I advise discussing money,” said Sudeshna Sen, career strategist and founder of Abundant Psyche. “Before the interview process kicks off so that you know that the interview process won’t be a waste of your time if, in the end, they say they love you but can pay half your current salary. And once you know that they love you and have extended an offer, and you feel that’s not a fair offer, definitely ask for more.”

Ripping off the bandaid at the outset is one strategy — another is waiting until you’ve won them over.

“If you are in the final stages of a job offer, that is when you have the greatest negotiating power,” said Lora B. Poepping, president of Plum Coaching & Consulting. “This is when the employer has shown their cards.”

On the other hand, you might wait until the competition gets thinner.

“If you’re called in for a second interview, I would say this is an appropriate time to bring up the question of compensation if it hasn’t already been discussed,” said Debbie Winkelbauer, CEO of Surf Search. “By this point, it’s pretty clear you’re among their top few candidates, so it doesn’t feel arrogant or money-hungry to ask about salary.”

Be Careful: 6 Career Mistakes To Avoid During an Economic Downturn

So, How Much More Do You Ask For?

The goal is to quote a number that’s at the upper end of what the employer is willing to pay without asking for so much that you seem unreasonable. One way to get to that figure is to just shoot for the top of that position’s salary spectrum.

“Benchmark to the market and quote the top 10% for similar roles, provided you know you can deliver to those roles,” said Sen.

A simpler strategy might be to base your request on what you made at your last job — only higher, of course.

“It’s common to go for an increase from your current salary but somewhere that feels fair — typically around a 15% increase,” said Rachel Gilfrin, career coach and owner of Rachel Harriet Coaching.

Options: 5 Things To Negotiate at Your Job Other Than Salary

Once you pick the right time, then you have to find the words — but not too many words.

“Stop oversharing and over-explaining,” said Poepping, who suggested that “when you negotiate, ask pointed questions,” like:

Hogan recommends not aiming too high or giving a specific number — instead, quote a spectrum and set your target salary at the low end. For example, if your ideal salary is $45,000, it might go like this, according to Hogan: