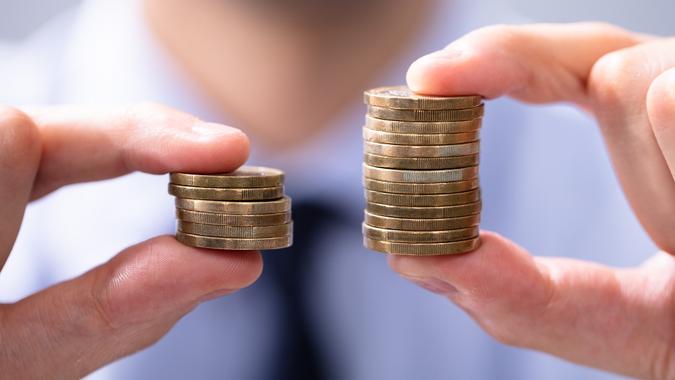 “The rich get richer” is ok if everyone else is getting comparatively richer, too. However, that’s not the way salaries work in the corporate world, a new study has shown.

See: 22 Side Gigs That Can Make You Richer Than a Full-Time Job
Find: States Whose Economies Are Failing vs. Thriving

According to a study conducted by Equilar for the Associated Press, wage increases for chief executives of S&P 500 companies rose 17.1% last year, compared to a 4.4% increase for private-sector workers. The median wage for these CEOs was $14.5 million.

Using pay data from 340 S&P 500 CEOs who have held their company positions for two years, the Equilar and the Associated Press’ compensation study found that at half of the companies included in the survey, it would take a middle-pay worker at least 186 years to make what their CEO did in 2021.

It should be noted that many CEO’s wages are tied in part to stock options and compensation-for-performance packages. When it comes to performance goals, many CEOs were able to reap the rewards of last year’s strong economic bounce back from the mini-recession of 2020 and the easing of the pandemic.

Regardless of how big a part individual performance played in boards approving enormous CEO compensation packages like Expedia Group’s ($296.2 million) and JPMorgan Chase’s ($84.4 million), they were done to reward newer CEOs with guiding their businesses through a pandemic characterized by supply chain complications and worker shortages, or to retain the services of veteran CEOs and persuade them to not abandon ship, the Associated Press reported.

Unfortunately, compensating and keeping the typical company worker barely seems to merit a thought, leading many Americans to anger over such compensation imbalances as the great resignation rages on. As CBS News reported, 4 million workers quit their jobs in April 2021. That number rose to a record 4.5 million in March 2022, despite reports of employers’ struggles in finding and hiring new workers, per CNN.

According to CBS News, a separate 2021 study by the Institute for Policy Studies (IPS) found that the pay for CEOs at 51 of 100 companies rose an average of 29% from 2020. Subsequent to many of these companies firing workers, the rank-and-file at those same companies saw their wages slip 2%.

POLL: Do You Make a Weekly Meal Plan or Other Regular Household Budget?
Explore: Here’s What the US Minimum Wage Was the Year You Were Born

“The notion that one individual almost single-handedly creates corporate value, and so he should be paid whatever it takes to keep him from abandoning ship, has always been absurd,” said Sarah Anderson, lead author of the IPS chief executive pay study. “But in the middle of a pandemic crisis, when frontline employees are demonstrating just how essential they are to our economy and health, it’s even more preposterous.”