With the latest “Star Wars” movie — “The Last Jedi” — hitting theaters on Dec. 15, many people will be reminded of the passing of Carrie Fisher, who will make her final performance as Leia Organa in the film. Fisher died Dec. 27, 2016, after suffering a heart attack at just 60 years old.

The actress got her big break in the original “Stars Wars” trilogy in the ’70s and ’80s, and decades later reprised the role of Princess Leia in “Star Wars: The Force Awakens,” which was released in 2015.

In honor of Princess Leia’s final rebellion, take a moment to check out Carrie Fisher’s fortune and legacy.

Much of the money Fisher earned over the years came from her films in the “Star Wars” franchise.

Along with other “Star Wars” leads, Fisher agreed to take a percentage of the movie’s profits, as well as money from TV screenings and re-releases. It was a great business decision, especially considering just how large the “Star Wars” empire has become.

Fisher did, however, make the mistake of signing away her likeness, meaning she didn’t profit from the sale of “Star Wars” merchandise. Of the “Star Wars” actors, she still has the second-largest net worth, behind Harrison Ford, whose net worth stands at $230 million, according to Celebrity Net Worth.

Fisher first played Princess Leia Organa in the 1977 film that started it all, “Star Wars: A New Hope.”

As her name suggests, Leia is princess of the planet Alderaan, and the film sees her pitted against Darth Vader, who as all “Star Wars” fans know, is actually her father. Along with her long-lost twin, Luke Skywalker, and love interest Han Solo — played by Mark Hamill and Harrison Ford, respectively — Leia fought the Galactic Empire in “The Empire Strikes Back” in 1980 and “Return of the Jedi” in 1983. In 2015, Fisher returned as Leia to wage war on a new enemy, the First Order, in “Star Wars: The Force Awakens.”

Fisher’s portrayal of Princess Leia helped the character become an icon, celebrated for her feminist power and cinnamon bun hairstyle. Moreover, each of the “Star Wars” movies that featured Fisher earned a significant sum, led by “Star Wars: The Force Awakens.”

Here’s a quick look at gross earnings for the films were, according to Box Office Mojo:

Fisher portrayed Leia one final time in “Star Wars: The Last Jedi,” which was her last movie role.

“There’s no way that we could’ve known this would’ve been the last ‘Star Wars’ movie she would be in, so it’s not like we made the film thinking that we were bringing closure to the character,” writer-director Rian Johnson told Entertainment Weekly in August. “But watching the film, there’s going to be a very emotional reaction to what she does in this movie.”

Although Fisher was only 19 when she filmed “Star Wars,” the actress had already made her onscreen debut. Two years earlier, Fisher appeared in “Shampoo,” along with Warren Beatty, Julie Christie and Goldie Hawn. The film racked up close to $50 million in gross profits. Additionally, she appeared in “The Blues Brothers” (1980), which boasts $57 million in gross profits, and “Hannah and Her Sisters” (1986), which has brought in about $40 million.

Fisher had a particularly good year in 1989. She appeared in a major supporting part in “When Harry Met Sally…” The film earned $92 million in gross profits. She also starred opposite Tom Hanks in “The ‘Burbs,” which has taken in more than $36 million since its opening.

Here are the gross earnings for Fisher’s early films, according to Box Office Mojo:

Fisher also enjoyed a successful television career, starting with an appearance in the 1969 TV movie, “Debbie Reynolds and the Sound of Children.” She appeared as herself on “Sex and the City” and “The Big Bang Theory,” and played character roles on “Entourage,” “Weeds,” “Smallville” and “Catastrophe” — her last TV role. The actress was also the voice of Angela, Peter Griffin’s boss, in “Family Guy.”

Fisher wasn’t only famous for her on-screen roles. Her semi-autobiographical novel, “Postcards From the Edge,” was published in 1987 and became a best-seller. The book depicts a fictionalized account of real events from the star’s life, including her drug addiction. It was turned into a 1990 film, which starred Meryl Streep, Dennis Quaid and Shirley MacLaine and brought in more than $7 million on its opening weekend and a gross of $39 million.

Here’s a look at the full list of books she has authored:

Fisher put her financial success to good use by contributing to numerous charitable causes and organizations, some of which have recognized the star for her efforts.

Last spring, Fisher was honored with a Lifetime Achievement Award from the Humanist Hub in Cambridge, Mass., for her openness about her mental illness and efforts to aid sufferers. During the ceremony, which included stormtroopers, Han Solo and a Wookiee, Fisher talked about her experiences with bipolar disorder, rehab and body image.

The star also was honored with a Golden Heart Award from The Midnight Mission, a Los Angeles-based nonprofit that works to offer a bridge to self-sufficiency for homeless people through counseling, education, training and job placement. Fisher was an avid supporter of the cause.

Additionally, Fisher was passionate about animal rescue. She joined other celebrities the summer before her death to petition for an end to the annual dog meat festival in China.

These Deals Are Out of This World: Star Wars Day Deals, Freebies and Sales

Carrie Fisher left her estate to her only child, daughter Billie Lourd. Her assets included several bank accounts, a 2016 Tesla S, personal and household belongings, full ownership of several LLCs and a life insurance policy, People magazine reported in July. In addition, Lourd inherited the rights to her mother’s public image and likeness, as well as her intellectual property rights, which included ongoing earnings from Fisher’s books, specials, trademarks and copyrights.

Lourd — an actress in her own right, starring in “American Horror Story: Cult and Scream Queens” — is not only dealing with the death of her mother but also her grandmother, actress Debbie Reynolds. Reynolds, Fisher’s mother, died one day after her daughter in 2016.

Fisher also owned a 44-acre property in Creston, Calif., which was auctioned off in October 2017. Sales figures are not publicly available, but it was expected to sell for $4 million to $6 million. 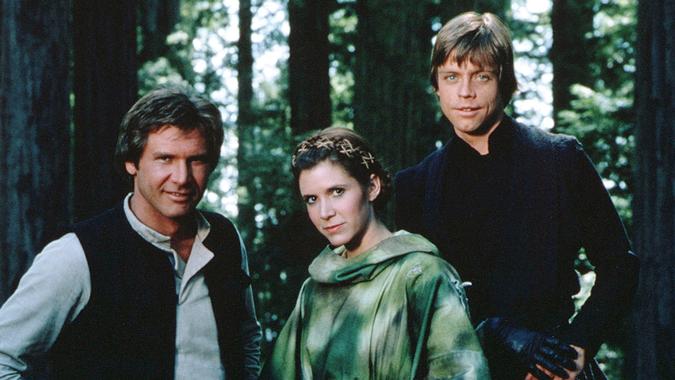 See how much the cast behind 'Star Wars: Episode VII' was paid.

> Net Worth > Celebrities > The Incredible Career, Fame and Fortune of Carrie Fisher