Due in theaters Dec. 21, the “Passengers” movie provides a truly out-of-this-world viewing experience. A spacecraft malfunctions during a 120-year voyage to another planet and two passengers — Jim and Aurora — awake from their hibernation pods 90 years too soon. Realizing that their spaceship is near destruction, the duo must save themselves and thousands of other passengers on board.

Find out the net worths of the “Passengers” cast, including its stars, Jennifer Lawrence and Chris Pratt. 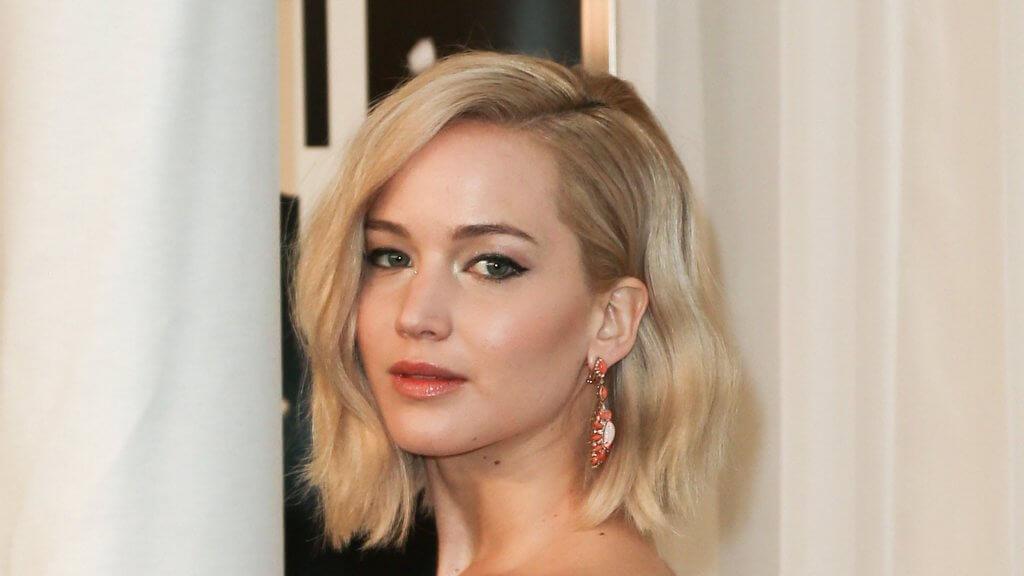 Jennifer Lawrence stars as Aurora Lane, who awakens decades too early from her hibernation pod. She falls for fellow awakened passenger James Preston (Pratt) while working to save the ship from its demise.

Already an established A-lister at just 26 years old, Lawrence has starred in several critically acclaimed films, including “Silver Linings Playbook,” “American Hustle,” “Joy” and all four installments of “The Hunger Games.” The in-demand actress has a full filming schedule ahead as well. She’s slated to star in the upcoming films “Zelda,” “It’s What I Do,” “Bad Blood” and “Red Sparrow.” 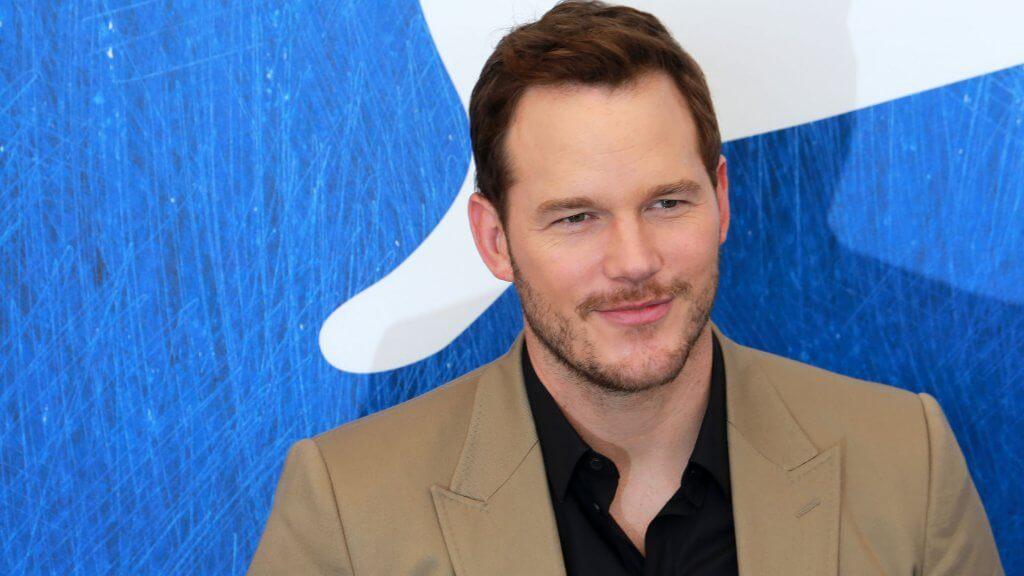 Chris Pratt plays Jim Preston in “Passengers,” also awakened 90 years too soon from his hibernation pod. Jim works alongside budding love interest Aurora to save the spaceship from a pending disaster.

Pratt was best known as Andy Dwyer on the series “Parks and Recreation” through much of his career, but he’s successfully become a major movie star since the series ended in 2015. A fan favorite, he was honored with the MTV Award for Best Action Performance in 2016 for his role in Jurassic World. 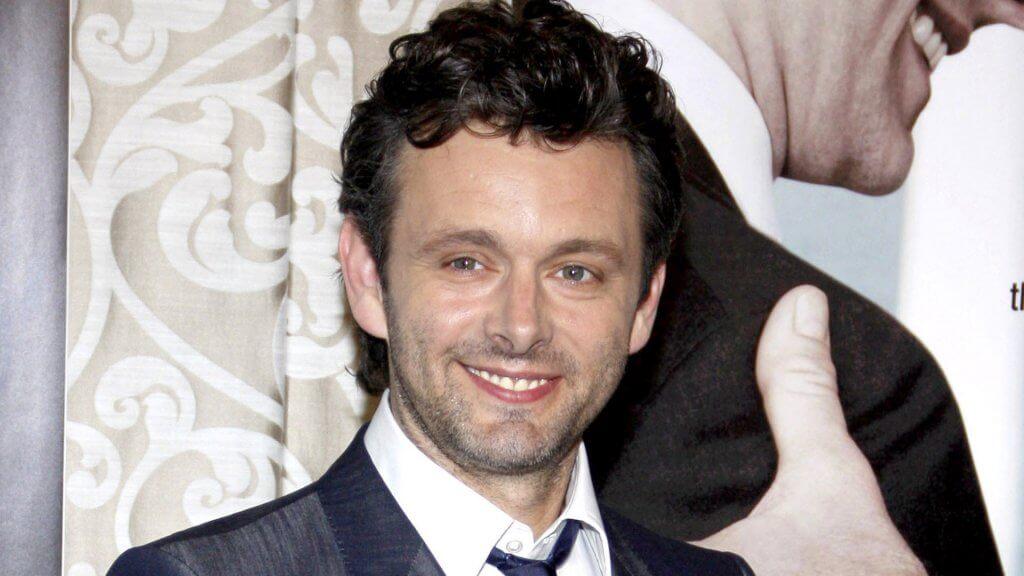 Michael Sheen plays Arthur, a robot bartender in “Passengers.” If you’re a fan of the Showtime series “Masters of Sex,” you’ll recognize him as Dr. William Masters.

Most of his career has been spent gracing the silver screen. Some of his most high-profile projects include “Nocturnal Animals,” “Midnight in Paris” and the “Twilight” saga.

Sheen has received high honors for his work, including a Golden Globe nomination for “Masters of Sex” and an Emmy nod for his work on the TV movie “The Special Relationship.” Catch him in the films “Home Again” and “Brad’s Status” in 2017. 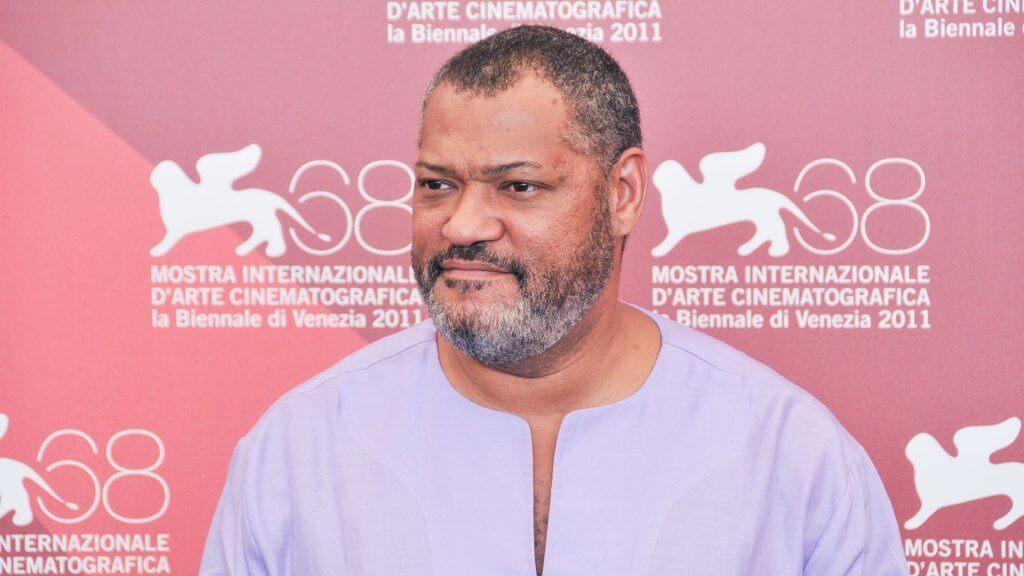 All that’s known about Laurence Fishburne’s role in “Passengers” at this point is that his character’s name is Gus Mancuso. The “Blackish” star had a very busy 2016, starring in the films “Batman v Superman: Dawn of Justice,” “Standoff” and the TV mini-series “Roots.”

In his nearly five decades as an actor, Fishburne has starred in many popular films, including “Boyz n the Hood,” “The Matrix” franchise, “Man of Steel” and “Ride Along.” He also starred in the television series  “Hannibal,” for which he earned $175,000 per episode, and “CSI: Crime Scene Investigation.”

Next year is another busy one for Fishburne. He’ll star in the films “John Wick: Chapter 2,” “Ruby in Murdertown” and “Last Flag Flying,” in addition to playing Nelson Mandela in the TV mini-series “Madiba.”

Years of entertaining audiences has resulted in several major awards and nominations for Fishburne. He’s won two Primetime Emmys, one for “Tribeca” and another in 1997 for “Miss Evers’ Boys.” Fishburne also received an Oscar nod for “What’s Love Got to Do With It” and a Golden Globe nomination for “The Tuskegee Airmen.” 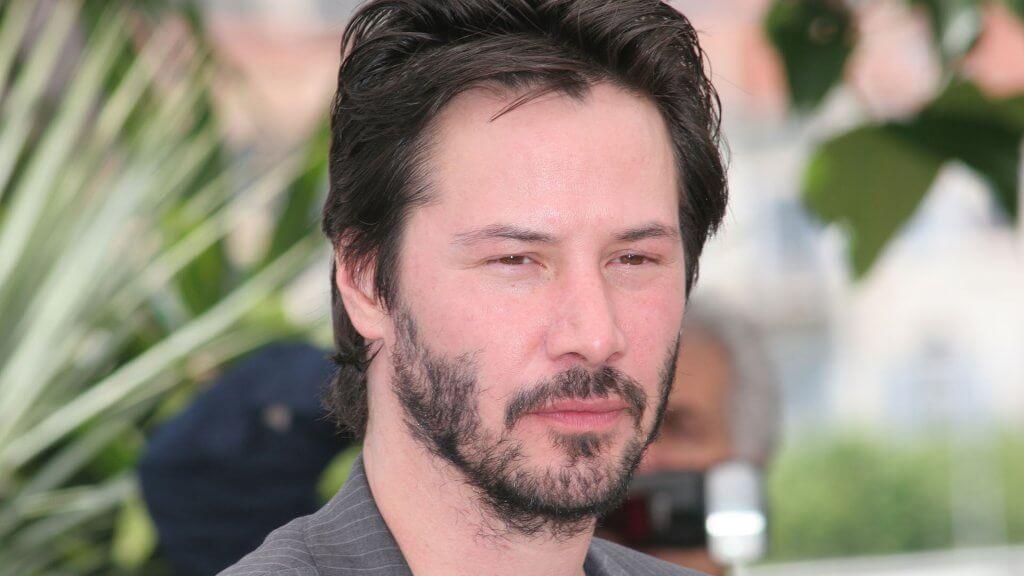 He’s not actually in “Passengers,” but Keanu Reeves was reportedly originally cast as James — Pratt’s role. Emily Blunt was slated for Lawrence’s part. Reeves was expected to produce the movie at one point before it switched studios from Universal to Sony.

Reeves is best known for his work as Neo in “The Matrix” franchise. He’s also starred in many other popular films, including “Speed,” “Devil’s Advocate,” “The Lake House” and “John Wick.” He’ll stay busy in 2017, starring in the films “To the Bone,” “John Wick: Chapter 2” and “Replicas,” as well as the TV mini-series “Rain.”

A Hollywood leading man for decades, Reeves has won several awards for his work, including three MTV Movie Awards for “The Matrix,” “Speed” and “Point Break.” 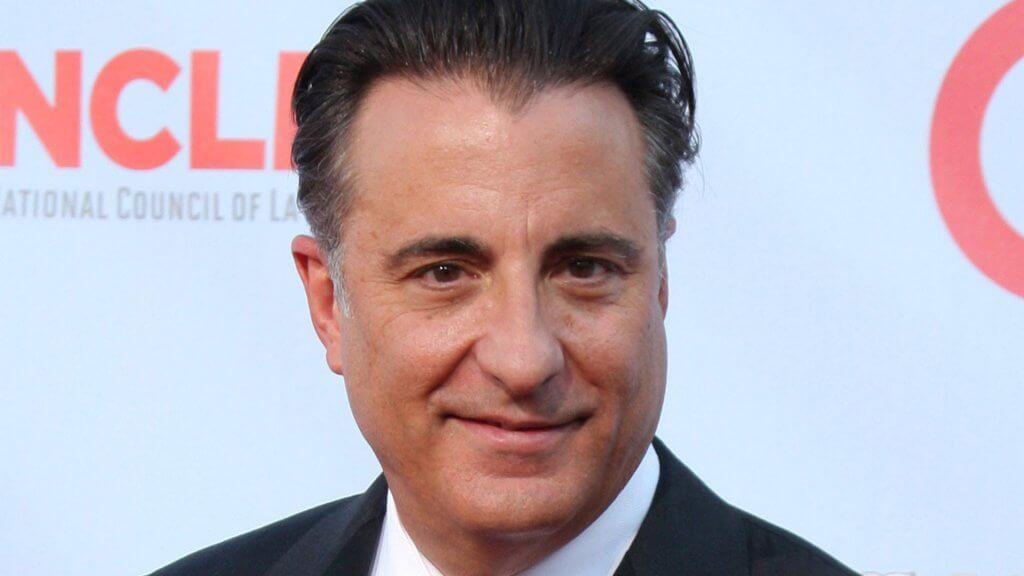 “Ballers” star Andy Garcia has had a busy year. In addition to starring in “Passengers” as Captain Morris, he also appeared in “Ghostbusters,” “Max Steel” and “True Memoirs of an International Assassin.”

Garcia has enjoyed a decades-long career that includes more than a few hit films, including “Ocean’s Eleven” and its sequels, “When a Man Loves a Woman” and “The Godfather: Part III.” He currently has multiple films in the works, including “Headlock,” “Geostorm” and “What About Love.”

He received both an Oscar nomination and a Golden Globe nod for his work on “The Godfather: Part III.” He also scored another Golden Globe nomination for the TV movie “For Love or Country: The Arturo Sandoval Story.” 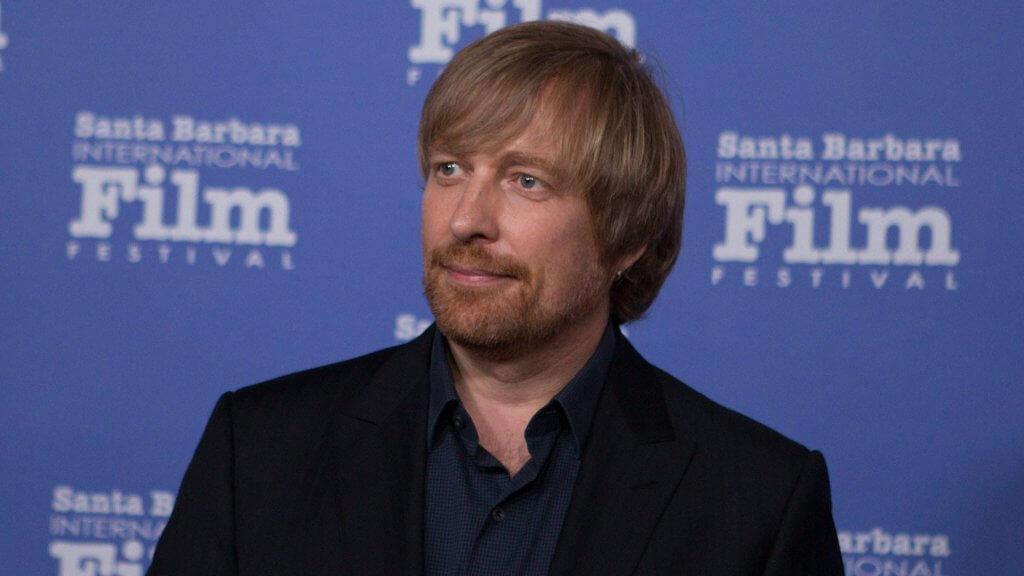 Morten Tyldum directed the “Passengers” movie. Some of his other popular films include “The Imitation Game,” “Headhunters” and “Buddy.”

His work on “The Imitation Game” received an Oscar nod– the highest Hollywood honor. Tyldum also received several other honors for the film, including a BAFTA nomination.

Now that his work on “Passengers” is complete, Tyldum is preparing for his next directorial project, “The Last Days of Night,” slated for release in 2018. Prior to that, he’ll direct the first two episodes of the new STARZ drama “Counterpart.” The Norwegian director is also reportedly looking to create an English language version of his hit “Headhunters,” according to Deadline. 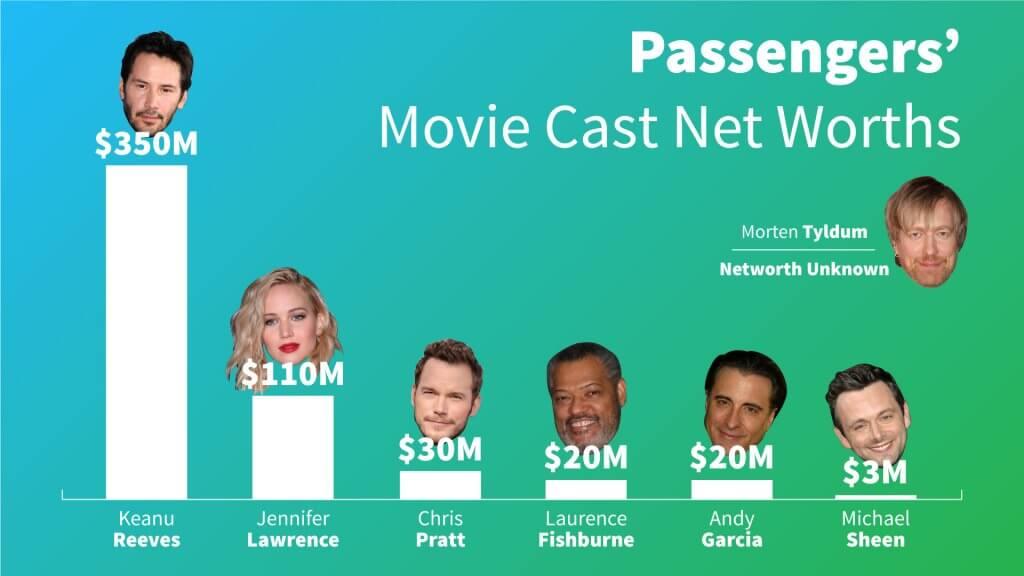 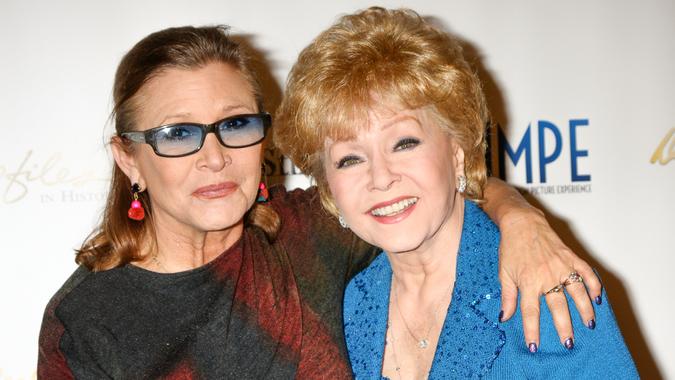 Debbie Reynolds Dead at 84: A Look at Her Glamorous Life, Career and

> Net Worth > Celebrities > From Jennifer Lawrence to Chris Pratt, See the Out of This World Wealth of the 'Passengers' Movie Cast