“Star Wars: The Force Awakens” — also known as “Star Wars: Episode 7” — stormed the box office on Dec. 18, 2015. Since its release, the film has pulled in over $2 billion worldwide, according to Box Office Mojo, which reports on film earnings.

With “The Last Jedi” hitting theatres on Dec. 15, now is a great time to reacquaint yourself with the cast behind “The Force Awakens” to celebrate the latest release in the Star Wars saga.

Here’s a look at how much the “Star Wars” movies have earned at the box office:

With “The Force Awakens” sequel “Star Wars: Episode VIII” due out Dec. 15, 2017, this juggernaut franchise doesn’t show any signs of slowing down — and neither does George Lucas, who created the franchise. According to Forbes, George Lucas’ net worth is a staggering $5.3 billion, which can largely be credited to the series’ success.

But Lucas isn’t the only one who has benefited from the continued success of Star Wars. Some of the main stars in the older movies joined the “Star Wars: The Force Awakens” cast — and they have acquired incredible wealth from the franchise, as well. Here’s a look at how the cast has fared financially.

Last year, he made Forbes’ “The World’s Highest-Paid Celebrities List,” along with fellow directors Steven Spielberg, Peter Jackson and Joss Whedon. Abrams is reported to have made $4.8 million directing “Star Wars: The Force Awakens,” not including 2 percent of the film’s gross earnings, according to the Daily Mail.

Also See: Guess Which ‘Star Wars’ Prop Sold for Over Half a Million Dollars

Hollywood superstar Harrison Ford started his career as a carpenter in Los Angeles. His woodworking trade led to a connection that landed him a role in 1973’s “American Graffiti,” which put him on George Lucas’ radar.

Harrison Ford’s $230 million net worth is linked to over 40 film credits, which have banked an estimated $8.65 billion at the worldwide box office, according to Box Office Mojo. On average, Ford’s movies earn more than $231.7 million.

For “Star Wars: The Force Awakens,” Ford earned $24.4 million off fees, plus 0.5 percent of the film’s gross earnings, reported the Daily Mail.

Han Solo to Rick Deckard: ‘Blade Runner’ Then and Now: Which Cast Is Richer?

Carrie Fisher was just 19 years old when she was cast as the rebel leader Princess Leia in the original Star Wars. Although her salary was never disclosed, Fisher was wise enough to join several other principal actors — like Mark Hamill — in agreeing to take a percentage of the movie’s profits, plus a take of TV screenings, re-releases and more.

The young actress, however, made the critical mistake of signing away her likeness, meaning she has missed out on mountains of money from Star Wars merchandise. Early contractual mishaps aside, Carrie Fisher has amassed a net worth of $25 million. For “The Force Awakens,” Carrie Fisher was paid a low seven-figure salary.

Oscar Isaac has landed roles in numerous blockbusters, from “Drive” to “Robin Hood,” in addition to critically-acclaimed films, like Oscar winner “Ex Machina.”

In “Star Wars: The Force Awakens,” Isaac plays Poe Dameron, an X-wing fighter pilot for the Resistance. In May 2016, the actor will star as the villain Apocalypse in the Marvel film “X-Men: Apocalypse.” Oscar Isaac’s net worth is $8 million. He is expected to return for “Star Wars: Episode VIII.”

Daisy Ridley made her big-screen debut as Rey, the main character in “Star Wars: The Force Awakens.” Rey is a scavenger on the planet Jakku who is thrown into the midst of an intergalactic war.

The actress’ career has been propelled by the success of “Star Wars: The Force Awakens,” for which she earned between $100,000 and $300,000, according to Variety. Daisy Ridley, who even landed an MTV Movie Award for her role as Rey, has a net worth estimated at $2 million.

London-born actor John Boyega landed his first big movie role in 2011 with “Attack the Block.” He scored roles in “Half of a Yellow Sun” in 2013 and “Imperial Dreams” in 2014. But it’s his role as defected Stormtrooper Finn in “Star Wars: The Force Awakens” that put Boyega on the map.

Finn helps Rey fight against the First Order, a successor to the Galactic Empire. With the film scoring box office success and critical praise, John Boyega’s net worth is $2 million. The actor is slated to appear in the upcoming thriller “The Circle,” starring Emma Watson and Tom Hanks.

Unlike Harrison Ford, Mark Hamill was an established actor by the time he took on the role of Luke Skywalker in the original Star Wars. Hamill reportedly earned $650,000 for the film — a hefty paycheck in 1977. Mark Hamill had the foresight to sign onto the film in exchange for one-fourth of one percent of the film’s future earnings.

For “Star Wars: The Force Awakens,” Hamill was paid a low seven-figure salary, according to Variety. Owed to his successful career in film, television, voice acting and theater, Mark Hamill’s net worth is $12 million.

Adam Driver reportedly earned a mid-to-high six-figure salary for “Star Wars: The Force Awakens,” according to Variety. His net worth is $2 million.

Peter Mayhew is the actor behind the lovable Chewbacca. He acted in the original Star Wars movie trilogy and “Revenge of the Sith.” In “The Force Awakens,” he appears alongside Harrison Ford. Peter Mayhew’s net worth is $500,000.

In “Star Wars: The Force Awakens,” Lupita Nyong’o appears as Maz Kanata. The Academy Award-winning actress appeared in the drama “Queen of Katwe” in 2016, and she voiced Raksha in the live-action remake of Disney’s “The Jungle Book.”

In addition to acting, Nyong’o has a lucrative deal with Lancôme. According to the Hollywood Reporter, Lancôme’s parent company, L’Oreal, reportedly pays its spokespeople a salary in the seven-figure range. Lupita Nyong’o’s net worth is $5 million.

Up Next: Star Wars ‘Rogue One’ Cast: Felicity Jones Net Worth and More 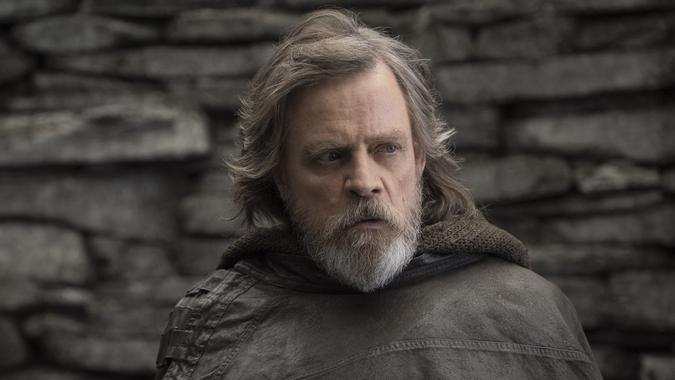 Learn about the careers and lives of the "Star Wars 8" cast.