As a member of “The Squad,” Michigan Rep. Rashida Tlaib — along with Reps. Ilhan Omar, Alexandria Ocasio-Cortez and Ayanna Pressley — has found herself at the center of several public clashes, not only with President Trump and the Republican Party, but also with House Speaker Nancy Pelosi. Her criticism of the U.S.’s relationship with Israel prompted Trump to publicly call out Tlaib and the three other progressive women of color in the group in a tweet on July 14, suggesting that the women “go back and help fix the totally broken and crime infested places from which they came.” Rashida Tlaib’s Twitter response included a video with the message that she won’t back down to a bully. “Together, we will fight back, speak truth to power, and become stronger for it,” she tweeted.

#13thDistrictStrong: I will #neverbackdown and no bully, even this racist President, will waiver the work we have to do for our residents of Wayne County. Together, we will fight back, speak truth to power, and become stronger for it. #rootedincommunity #BoostAct #JusticeforAll pic.twitter.com/XkAcPA3FlL
— Rashida Tlaib (@RashidaTlaib) July 14, 2019

View this post on Instagram
We brought new life into the United States Congress because you believed in us.
A post shared by Rashida Tlaib (@rashidatlaib) on Jan 3, 2019 at 3:50pm PST

In 2018, Tlaib earned $28,713 for her work as an attorney at the Maurice & Jane Sugar Law Center. She also received $200 as a consulting/advisory fee from Metro Solutions, a nonprofit fiscal intermediary.

View this post on Instagram
Screaming inside! Thank you for believing in me. Fighting for you will be an honor. #rootedincommunity #unapologeticallyMe
A post shared by Rashida Tlaib (@rashidatlaib) on Jan 2, 2019 at 12:35pm PST

Tlaib is the daughter of Palestinian immigrant parents and is the oldest of 14 children. She was born and raised in Detroit. Outside of her political career, Tlaib worked as an attorney at the Sugar Law Center for Economic and Social Justice. In 2008, she made history as the first Muslim woman to ever serve in the Michigan legislature. She now represents Michigan’s 13th congressional district.

A member of Congress since 2018, Tlaib has been vocal in her support of progressive causes, including Medicare for All, tuition-free college, a $15 minimum wage and the abolition of ICE. She has stated that she believes Trump should be impeached, and supports the Boycott, Divestment and Sanctions movement targeting Israel. Rashida Tlaib’s Israel views are controversial among the Democratic mainstream.

Keep reading to see the highest- and lowest-paying jobs in government. 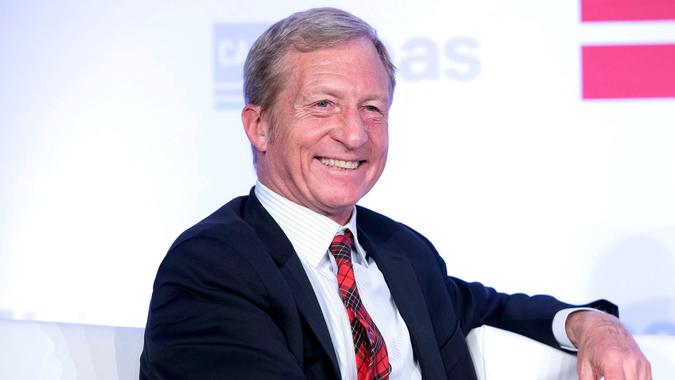 Tom Steyer Net Worth: Learn More About the Billionaire Philanthropist

Tom Steyer's net worth is staggering.