How Much Does an NFL Referee Make? 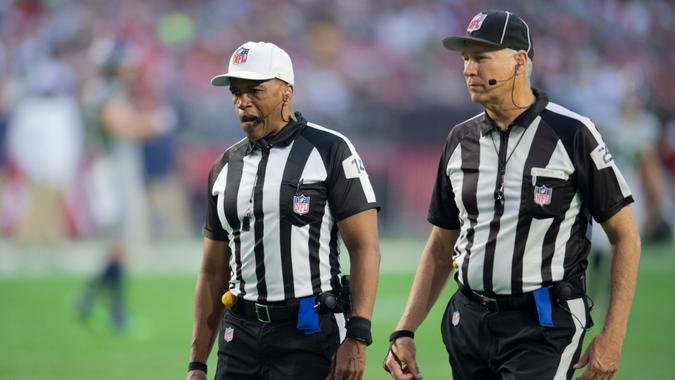 The names and faces of members of the Cincinnati Bengals and Los Angeles Rams have filled our television screens in the run to Super Bowl LVI. Matthew Stafford. Joe Burrow. Aaron Donald. Ja’Marr Chase. They’re all household names now.

But on Sunday, another group will be running up and down the field — the officials, whose names typically enter our vocabularies only if a questionable call impacts the outcome of a game.

More: The 10 Highest-Paid Players in This Year’s Super Bowl
Also Learn: How Much Are the Owners of the Super Bowl LVI Teams, Rams and Bengals, Worth?

The job isn’t an easy one. It’s physically demanding, and it requires laser-eyed focus on the official’s assigned part of the field. Then there’s the chirps from players and coaches — and the jeers from the fans — that officials must endure.

Just what does it take to become an NFL official and, most interestingly, how much do they earn?

How Much Do Officials Earn?

The NFL doesn’t release salary figures for officials, but Sporting News reported that, as of 2019, the average salary was $205,000 per season. Because the season now has one additional week — the league moved to a 17-game season instead of 16 in 2021 — that amount could have gone up.

The bonus officials receive for working the Super Bowl also is a well-kept secret and has been the subject of much speculation. A report from Money.com in 2018 said the amount could be between $30,000 and $50,000.

While $205,000 sounds like a lot of money for part-time work, compare it to the pay of players. Rams quarterback Stafford’s annual average salary is $27 million. Chase, the Bengals’ star rookie wide receiver, earns an average of $7.7 million per year based on the total value of his four-year contract.

Is NFL Official a Full-Time Job?

Field officials are part-time employees, and many hold other jobs. Veteran referee Ronald Torbert, for example, juggled his work as an attorney with his long career as an official in high school, college and finally the NFL until he retired in 2019. He is the referee for Super Bowl LVI.

NBC Sports said that, as part-time NFL employees, officials do not receive insurance benefits. They are members of the NFL Referees Association, have a collective bargaining agreement and can enroll in a 401(k) plan with a partially matching contribution.

Super Question: Is Hosting the Super Bowl Worth It for Cities?

What Experience Does an NFL Official Need?

The NFL has 121 officials on its roster, and it’s a select group. The league’s officiating department is charged with working with local, state and collegiate officiating groups to develop a pipeline to the NFL, but it’s a long process.

The NFL has scouts across the country to look for officials at lower levels of the game who have the potential to advance, and about 4,000 officials have been identified. Once they have caught the eye of the NFL office, their progress is monitored, and they might be invited to take part in the NFL Officiating Development Program. Officials in major college conferences seem to have the best chance of moving up.

How Are Super Bowl Officials Selected?

The NFL grades the performance of officials on a weekly basis, judging them for accuracy. Officials with higher scores get the plum assignments in the playoffs.

This year’s crew for Super Bowl LVI — made up of eight officials, as usual — has worked a combined seven Super Bowls. For four of the referees, this is their first Super Bowl assignment.