Is Costco Worth It for Single People? 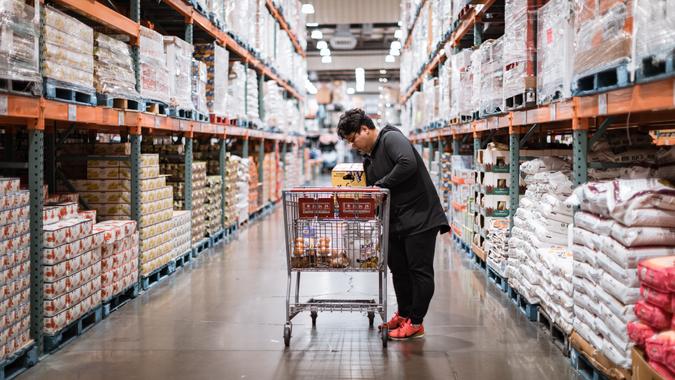 Costco, the retail giant that enables consumers to buy in bulk at a discount, has become known as a place where families go to stock up on a crazy amount of groceries. One may shop at Costco alone, but it begs the question of whether a single, kid-free person will go through enough economy-size cereal and jumbo cases of toilet paper to justify a Costco membership.

Budget: 20 Ways To Pay Less at Costco
More: 3 Best Warehouse Clubs and How To Save: Costco, Sam’s Club and BJ’s

If you’re single and wondering if you belong as one of the superstore’s shoppers, read on to find out if it’s worth it for you to join the Costco crew.

The $60 Membership Must Be Justifiable

It’s not just that single, childless people might feel out of place in a kid-packed emporium such as Costco; it may not be in their best financial interest either. If you aren’t familiar, to shop at Costco you’ll need your own membership card to enjoy the sweet savings (unless you’re there shopping with another member already). That membership starts at $60 a year, and while most people think it more than pays for itself in bargains, it may not work out so well for single folks.

“Keep in mind that with a Costco membership, you should have a positive cost/benefit analysis,” said Trae Bodge, smart shopping expert at Truetrae.com. In her opinion, “A single person simply doesn’t need to shop at Costco enough for the membership to be worth it.”

Check Out: Costco and the Evolution of the Kirkland Signature Brand

It’s a Quantity Over Quality Situation

For Bodge, it’s a matter of quantity and storage accessibility for bulk buys.

“In my opinion, the needs for specific products are very similar [between families and single people], but it’s a matter of the quantity that is needed,” Bodge said. “Where a family of four might make quick work of a bulk portion of mixed greens, it could take weeks for a single person to do so. For the single person, the greens will go bad in that time.”

Bodge reasons that the same goes for items that you wouldn’t think of as perishables, like olive oil and OTC medications. “A family would likely finish those items before they expire, but a single person wouldn’t,” she said.

Physical space and storage availability also comes into play.  “Where a family is more likely to be living in a larger home/apartment with more storage for bulk items, a single person may not,” Bodge said.

Find: 5 Bulk Food Items You Need To Be Buying at Costco This Winter

All Shoppers Created Equal … In Bulk

Julie Ramhold, consumer analyst at DealNews.com, sees things differently. When asked whether she thinks it’s worth it for single people to shop at Costco, she replied, “Absolutely!” In her opinion, the ability to buy in bulk is still beneficial for a single person.

“If single people can find great savings by purchasing in bulk — they may just have different priorities than a fuller household,” Ramhold said. “For instance, single people may not want to purchase a lot of fresh produce unless they can eat it all before it has a chance to go off. The same goes for other foods too —  like dairy, cereal and bakery foods may go off or stale before they can be eaten. Even so, if you can store the excess (freeze bread and cheese, for example) then you can easily shop in bulk for these items at Costco and get your money’s worth.”

Be Aware: 21 Items That Are Always Cheaper at Costco

What If You Have No Storage Space?

Ultimately, if a single person can comfortably afford the $60 membership and has the room to store items purchased in bulk, then it makes sense for them to become a Costco member. Those short on spare storage shouldn’t slink away from the store just yet, though. Consider the following hacks for making the Costco membership work for you — even if you’re flying solo in a small space.

“Costco typically has a round of warehouse savings roughly every month and it’s a fantastic opportunity to stock up on different items for less,” Ramhold said.

“It includes things from basically every category they sell, including snacks, groceries, vitamins, clothing, office supplies, furniture, and even jewelry and electronics. Before you plan a shopping trip, be sure to check out their Member-only savings online. In addition to these, Costco often has online-only savings promotions, which tend to be bigger items like furniture, small appliances, tools like pressure washers or generators, and even flooring as well as things like mattresses.”

Split Purchases With Friends and Family

“Buying in bulk can be a huge money-saver, but don’t think you’re restricted to only things you can use by yourself,” Ramhold said. “Talk with friends and family to see if they’re interested in anything Costco sells and you can make the purchase, then split the cost and product with them. It’ll save you both more money than if you shopped alone, and you won’t have to worry about using all of something before it goes off or loses its efficacy.”

Stock Up on Non-Perishables

“There are plenty of non-perishable foods, like Madras lentils pouches, canned chicken breast, sardines, and pink salmon, dried pasta, spices, beans and more that a single person can stock up on without worrying about having to eat the food in a short amount of time,” Ramhold said. “Coffee is another excellent purchase to make at Costco, as you can find bulk whole bean or ground coffee, or even a variety of K-cups if that’s your preferred brewing method.”

She continued, “Either way, you’ll save over buying at your local grocery store and get quality coffee that’ll last quite a bit as long as you have a good storage plan for it.”

Related: Should You Buy Groceries From Costco?

Don’t Focus on Food Only

“Costco has so much more than groceries, and single people can benefit with a membership by being sure not to just focus on food items,” Ramhold said.

“The warehouse club regularly has great deals on things like kitchen items, including small appliances, as well as things like food storage containers, utensils, cutlery and knives, drinkware, home decor, cookware, bakeware, bedding and bath items.  Plus, whether you work from home or in a traditional office setup, you can find great deals on things like printer paper, sticky notes and writing supplies to outfit your office. Costco is also good for beauty purchases, from tools and accessories to hair care, makeup, skin care and even fragrances.”