Does it anger you to know that Amazon’s Jeff Bezos paid $0 in federal taxes this year and, as of Sept. 11, is worth approximately $113 billion? Before you throw up your hands in frustration and yell, “This country is screwed!” consider learning more about the public’s growing interest in the wealth tax.

Unlike the death tax, the wealth tax is exactly what it sounds like:

It’s a tax on certain individual’s wealth based on the market value of assets they own instead of their annual income.

Earlier this year, Business Insider published research that found the top 0.1% of American taxpayers have 39% of the country’s wealth, whereas the bottom 90% only have 26%. In some metro areas like Miami, the top-income to bottom-income ratio is 55.4 to 1. But before you grab your burning torches and sink a superyacht, know that some United States politicians are just as upset as you and plan on implementing their versions of this particular tax to solve America’s ballooning income inequality.

Wealth Tax in a Nutshell: A Math and History Lesson

With respect to math, wealth tax is calculated differently from country to country. The basic equation is that wealth tax equals tax rate times an individual’s assessed net worth, not income. How is this unique from a current tax structure? Well, the part of the equation that taxes net worth, aka assets, instead of income. For example, if you earn $300,000 per year, but your assets — real estate, car, stocks/bonds and that pimped-out superyacht — are worth $4.5 million, the $4.5 million will be taxed instead of the $300,000. This means a lot more dough for the American government and, ultimately, for the bottom 90% of American taxpayers.

Regarding history, wealth tax resurfaced in our lexicon in 2013 when Thomas Pikkety’s book “Capital in the 21st Century“ stated that only outside forces can offset the widening wealth inequality. This tax isn’t a new concept. Fifteen European countries have tried implementing a wealth tax, resulting in a type of success that can best be defined as mixed. For example, Spain abolished their tax on wealth over 1 million euros in 2008 and French president Emmanuel Macron replaced the French wealth tax in 2017. As of right now, just a few European countries still have their wealth tax in effect.

The wealth tax may also sound familiar to most Americans but under a different name: property tax. Property tax varies from jurisdiction to jurisdiction, but it typically works as a tax on physical assets such as, well, properties. Wealth tax differs from property tax because it is not limited to physical assets. Under a wealth tax, investments, cash and all financial holdings are applicable in addition to properties.

See: How Would a Tax on the Ultra-Rich Affect You?

Right now, the wealth that is held by .01% is growing stagnant, meaning their money is not being put back into the American economy. A key example of this stagnation is the current corporate climate of the top 495 companies in the S&P 500 Index. With the institution of Rule 10-b 18 in the Securities Exchange Act in 1982, these companies are allowed to manipulate their stock prices with something called share buybacks, which is when a company, or individuals in the company, hike up their stock prices by buying back their own shares. This action decreases the amount of shares and increases their value. Normally, when a company sees an increase in value, the workers benefit with an increase in wages. Now, a company’s value increase rarely benefits the workers and keeps the wealth concentrated among a small pool of people. This is one main reason why inequality has grown exponentially in the U.S. over the past 30 years.

Wealth taxes demand the movement of money because it will otherwise be corroded by taxation. But where does this money go? The answer lies outside of the concentrated areas of wealth, like other private investments or public infrastructures, which would benefit more people who have not seen the financial benefits of living in one of the richest countries in the world.

Compare: See What a $100K Salary Looks Like After Taxes in Your State

It’s hard to ignore that the wealth tax was a great, big flop in Europe. Critics of a wealth tax in America fear wealthy business owners will renounce their citizenship and often cite the mass exodus of approximately 42,000 millionaires in France between 2000 and 2014 when the Socialist party implemented its wealth tax.

Others argue this tax will be difficult to collect. Personal net worth is calculated by subtracting liabilities — aka debts — from assets. And the more assets a person has, the harder net worth is to value because private assets like capital gains, trusts and real estate holdings constantly change and would be difficult to pin down by the IRS.

The most obvious argument is that the IRS would have to increase its hunt for tax evasion, which means more government funding. Rich people hire the best financial advisors who know tax loopholes like the back of their extravagantly manicured hands. Need proof? In 2016, the 11.5 million leaked documents from Panama law firm Mossack Fonseca exposed 214,000 tax havens from 200 different countries and territories. The Panama Papers helped recover $1.2 billion in fines and back taxes.

Elizabeth Warren Has a Plan

In January 2019, Democratic presidential hopeful Sen. Elizabeth Warren introduced her Ultra-Millionaire Tax plan. The proposal would institute a tax rate of 2% on every dollar of net worth above $50 million and 3% above $1 billion; resulting in roughly $2.75 trillion in revenue over ten years. She defines this as a small tax because it would only affect approximately 75,000 households in America. If these taxpayers choose to renounce American citizenship to avoid this tax, they will be hit with a 40% exit tax on their net worth.

Check Out: Elizabeth Warren Paid Nearly One-Third of Her $1M Income in Taxes

Every Dollar Has a Job

Warren plans to put this revenue to work for the American people. According to Warren’s campaign website, her Ultra-Millionaire Tax is particularly attractive to folks who can’t see the light at the end of their student debt tunnel and any parent up to their eyeballs with child care payments for young kids. The senator’s plan supports universal pre-K for all three– and four-year-olds, raised wages for child care and preschool teachers. This wealth tax would also help pay for free tuition for all public technical schools and two-year and four-year colleges, and would give $50 billion to historically black colleges and universities. Finally, the plan proposes to use $100 billion over ten years to fight the opioid crisis, and would supply a “down payment” for the two big humdingers of modern American times: climate change and Medicare for All.

One would think such a controversial plan would create a radical divide in America, but according to a survey conducted by Morning Consult/Politico on Feb. 1-2, 61% backed Warren’s Ultra-Millionaire Tax, including 50% of Republicans. A similar poll by The New York Times in February 2019 showed similar results and a Business Insider poll found that 54% of Americans supported Warren’s proposal, while a mere 19% disapproved.

Perhaps the most impressive endorsement came from the ultra-rich themselves. An open letter from a group of wealthy Americans, which was published by Medium in June 2019, called for all presidential candidates to adopt a wealth tax and specifically cited Warren’s proposal as “straightforward.”

This letter is a welcome call for change for some Americans. A recent GOBankingRates survey found that approximately one in three Americans think the rich are greedy and that 32% surveyed strongly agree that the American government favors the rich. The same GOBankingRates survey found that about 40% of Americans have neutral feelings about the rich, but 56% agreed or strongly agreed that they should be taxed more. 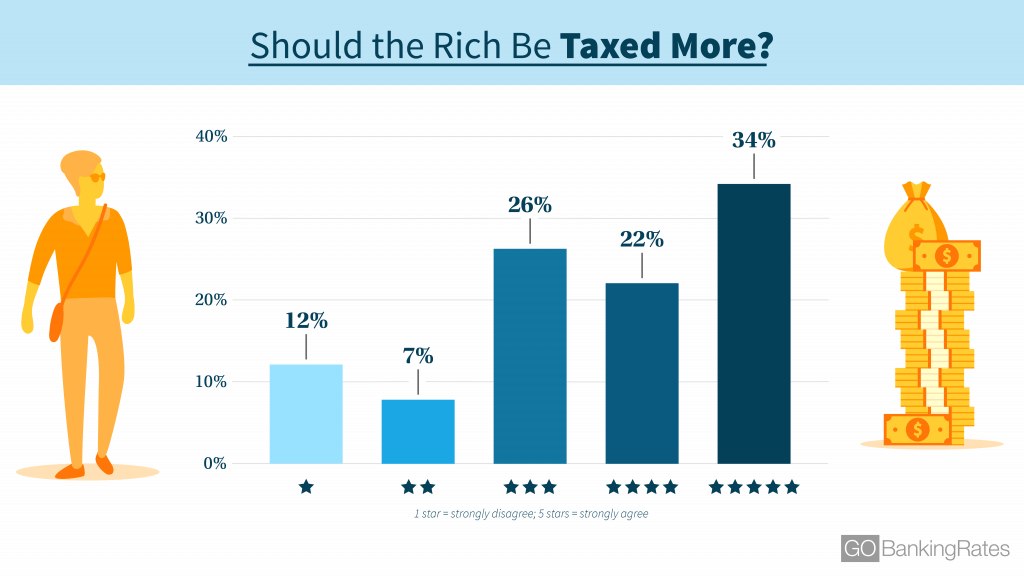 Although Warren is building support for her proposal, freshman Rep. Alexandra Ocasio-Cortez has her own plan on taxing the rich that has a very different approach. During a January 2019 episode of CBS’ “60 Minutes,” Ocasio-Cortez proposed a wealth tax as high as 70% on earnings above $10 million to help fund her climate change plan called Green New Deal. This tax echoes a historically high tax rate for the nation’s wealthiest, which was in effect from post-World War II until Reagan’s presidency when it was reduced to 28%.

Ocasio-Cortez’s proposal strictly taxes income, not assets like Warren’s plan. Howard Gleckman, a senior fellow at the nonpartisan Tax Policy Center, warned that with Ocasio-Cortez’s rate, high earners will most likely change their income into being paid by stocks or other methods of increasing their capital gains.

Spokespeople for both Warren and Ocasio-Cortez support each other’s types of tax hikes because they serve the greater goal of minimizing wealth inequality. Warren’s Ultra-Millionaire Tax has gained more popularity, however, with 74% of polled Democrats and 50% of polled Republicans in favor — equaling a total of 61% of all those polled in favor. While Ocasio-Cortez’s plan has received 60% support from polled Democrats, 31% of polled Republicans with a total of 45% of all polled voters. Ultimately, Warren’s tax has received more praise. Her plan would yield more tax revenue because CEOs and the ultra-rich tend to have more wealth tied up in their assets than in their income.

Although Warren’s tax on the ultra-rich is gaining support, Americans aren’t placing all the blame on the rich. A recent GOBankingRates poll shows that only 33% of polled Americans lean toward not thinking the rich are responsible for wealth inequality. 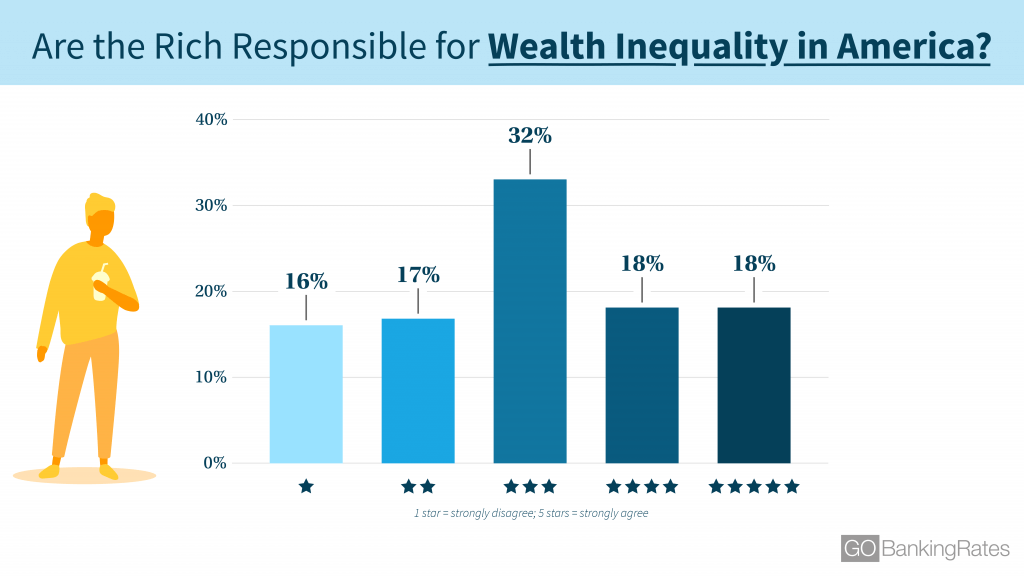 What Does This Mean for You?

Although Warren’s plan mostly focuses on ultra-rich Americans, the real focus is on you. According to her website, a married couple who makes $100,000 per year would pay $0 in taxes because they are below the $50 million baseline. On the other side of the spectrum, a hedge fund manager with a net worth of $500 million would only be taxed 2% on the $450 million that surpass the $50 million threshold, yielding a total annual liability of $9 million.

Ultimately, the effects of any potential wealth tax will be debated even years after it is imposed. Your support of a wealth tax may come down to more emotional motivations. It is hard to ignore ethics, beliefs about institutional racism and sexism or a personal yearning for financial justice when considering the need for this tax. Regardless where your interests lie, taxing the wealthiest Americans will continue to provoke heated conversations in America in the coming years.

Jared Nigro is a writer living in Los Angeles who has worked for economic and environmental foundations such as The Dan & Susan Gottlieb Foundation. 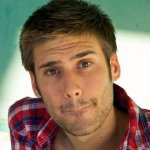 Jared Nigro is a writer based in Los Angeles. His experience includes covering a range of personal finance topics for GOBankingRates, specializing in offering actionable advice for banking customers. In addition to writing about personal finance, he has written for environmental and socioeconomic organizations like The Daniel & Susan Gottlieb Foundation and InsideOUT Writers. 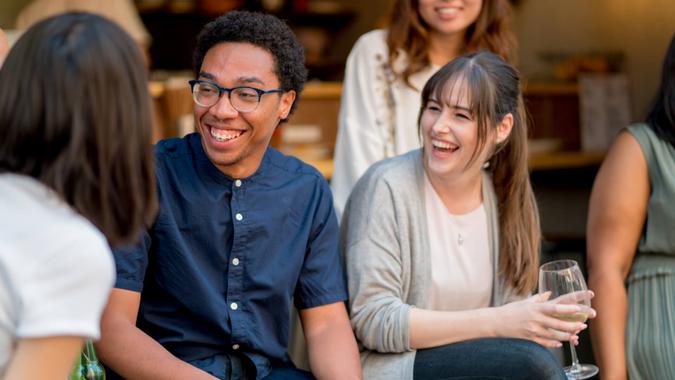 Survey: Only 18% of Americans Believe Their Tax Dollars Are Being

And more than half think they're paying too much in taxes.

> Taxes > Tax Laws > What Is a Wealth Tax? A Look at Elizabeth Warren's Ultra-Millionaire Tax Plan