Bitcoin Plunges as China Declares All Crypto-Related Activity Illegal – Should You Buy the Dip? 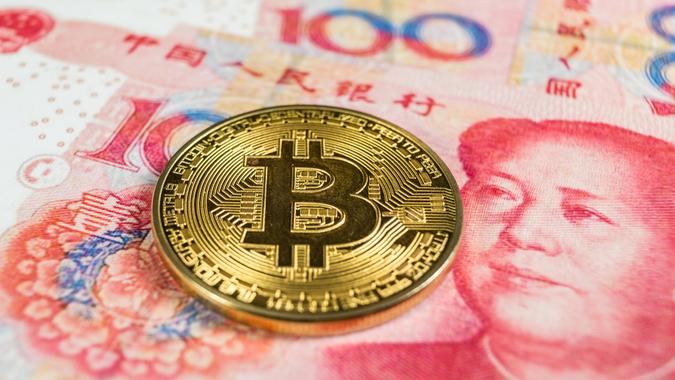 The People’s Bank of China reiterated its tough stance on cryptos today, announcing on its website that all crypto-related activities are illegal. The announcement sent Bitcoin tumbling 5.5% at $41,000, while Ether was down 8.4%, at $2,824 this morning, according to CoinMarketCap.

See: Experts Say Market Correction Is Opportunity for Young Investors To ‘Buy the Dip’
Find: 10 Cheap Cryptocurrencies To Check Out

The statement on the bank’s website notes that it aims to “further prevent risks of hype in virtual currency transactions.”

The bank said that virtual currencies that are issued by non-monetary authorities, use encryption technology, distributed accounts or similar technologies, and exist in digital form, such as Bitcoin and Ethereum, cannot be circulated as currency in the market.

However, despite the drop in crypto prices this morning, some experts believe now is a good time to buy and remain optimistic as to Bitcoin’s future.

Sylvia Jablonski, CIO and co-founder of Defiance ETFs, tells GOBankingRates that the news about China restricting mining, investment and use of cryptocurrency is nothing particularly new.

“As an avid believer in crypto, particularly Bitcoin and Ethereum, blockchain and NFT technologies, I believe that buying the dips could lead to investment appreciation,” she says. “Between institutional use and adoption, countries like El Salvador utilizing the currency, funds buying crypto to provide exposure to investors potentially in fund formats like ETF and mutual funds to come, retirement plans and trading platforms allowing access, the path to 100k remains bright.”

Discover: Are Crypto Crashes Building to Become the Next Dot-Com Bubble Burst?

The bank explains its decision by saying that in recent years, Bitcoin and other virtual currency transaction activities have disrupted economic and financial order, “breeding money laundering, illegal fund-raising, fraud, pyramid schemes and other illegal and criminal activities, seriously endangering the safety of people’s property.”

“Overseas virtual currency exchanges to provide services to Chinese residents through the Internet are also illegal financial activities,” according to the announcement.

In June, China announced a crackdown on Bitcoin, which triggered the shuttering of several mining sites and sent the crypto crashing.

China’s crackdown extended to the southwest province of Sichuan, where authorities ordered cryptocurrency mining projects closed in the major mining center. The Sichuan Provincial Development and Reform Commission and the Sichuan Energy Bureau issued a joint notice, demanding the closure of 26 suspected cryptocurrency mining projects by Sunday, Reuters reported at the time. Sichuan is China’s second-biggest bitcoin mining province, according to data compiled by the University of Cambridge.

According to the Chinese newspaper Global Times, the ban also means that more than 90% of China’s bitcoin mining capacity is estimated to be shut down.

Ric Edelman, founder of the Digital Assets Council of Financial Professionals, tells GOBankingRates that China is a Communist regime and the government despises anything that threatens its control.

“But its economy operates with strong capitalist leanings – creating a philosophical struggle within its borders,” he noted, “China doesn’t know whether to fear the threat that digital assets impose on its control or love the economic benefits that this new asset class brings.”

Edelman also says, “Increasingly, the political side of the government has been winning that debate. But Bitcoin is both global and decentralized, and it’s thus beyond China’s control,” adding that despite each of China’s clampdowns, each announcement had a short-term negative impact on Bitcoin’s price.

“The news was soon forgotten, and Bitcoin rose to ever-higher levels. I see no reason why that trend won’t continue.”

See: Why Everyone is Talking About Evergrande: The Chinese Giant Driving Global Selloff Fears
Find: What Is the Next Big Cryptocurrency To Explode in 2021?

The sentiment is echoed by James Butterfill, investment strategist at CoinShares, who tells GOBankingRates that the announcement doesn’t come as a surprise.

“This has to be the 20th time or whatnot that China has supposedly banned Bitcoin. The first one was all the way back in 2017, and there have been several previously this year. Yes, there’s always something ‘different’ about the bans, but I think you get my drift here. This happens all the time and it’s never really dramatic in the larger scheme of things,” he says.

He adds that this may also relate to capital controls, with the Evergrande collapse, to prevent contagion and an exodus of capital from the country, a clampdown on Bitcoin is an easy target.

“It should surprise no one that China doesn’t like Bitcoin. It is the pure antithesis of their regime of top-down centralized currency control with Orwellian surveillance features and full removal of all freedom of choice. Bitcoin is freedom money which inherently respects property rights, cannot discriminate against its users in any way, and doesn’t allow for confiscation, censorship or debasement. Obviously, the Chinese Communist Party will hate that,” Butterfill says.