Coinbase IPO Set for April 14: What You Need To Know Before Investing In the Crypto Trading Platform 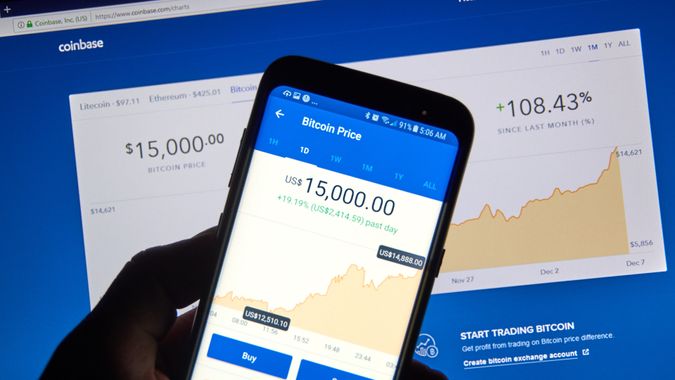 Coinbase, one of the world’s most popular cryptocurrency trading platforms, is soon to become open for trading to the general public. The company announced on April 1 that its trading debut via a direct listing on the Nasdaq is expected to take place on April 14.

Bitcoin and Dogecoin recently experienced what Forbes called a “crypto gold rush.” Is Coinbase set to attract a gold rush of its own?

Here’s what to know about Coinbase and what its initial public offering could mean for you.

If you want to get your virtual hands on some Bitcoin, you can either “mine” it yourself with expensive computing equipment and a supply of energy sufficient to operate it, or you can purchase currency that has already been extracted. Most people choose the latter, and for many, that method of choice is Coinbase.

Coinbase has been around since 2012. It envisions a future where fiat currency has been replaced by cryptocurrencies. Bitcoin is the most notable example of these, but it is still only one of many.

Since then, however, people have primarily invested in cryptocurrencies. Rather than using them as cash, they have treated them more like stocks or precious metals than currency.

Coinbase’s role in all this is that it allows users to purchase and sell these cryptocurrencies and offers a place to keep them — a digital wallet — in the meantime.

How Does Coinbase Make Money?

When someone completes a transaction on Coinbase, they pay fees for the privilege of using the service. One of these is the Coinbase fee. This is either a flat rate or a variable percentage. It is based on the user’s region, product feature and payment type.

Coinbase’s other fee is the margin or spread of up to 2.00% of the transaction. This is added to the exchange rate on Coinbase Pro — the trading platform tied to Coinbase where all orders are fulfilled.

Coinbase also has a few other revenue streams that continue to grow over time:

How Much Is Coinbase Worth?

Placing a dollar value on startups is tricky, but the company’s worth has skyrocketed over the last few years. Coinbase’s last formal valuation came in 2018 when it received $300 million in E-series funding and was reportedly worth $8 billion. That number has since jumped into the double digits, with Nasdaq Private Market activity in early March of 2021 indicating a value as high as $77 billion.

Keep in mind that Coinbase is well positioned as a startup to have a higher IPO than even private trades suggest. With a 2020 revenue of $1.3 billion — more than twice the $534 million figure from 2019 — Coinbase ended the year with a net income of $322.3 million.

When its profitability is combined with its massive 43-million-strong user base, it isn’t surprising that its major investors believe Coinbase’s IPO could top the $100 billion mark.

There are a few unusual elements to the Coinbase story, starting with the fact that it’s the first company of its kind to hit the stock market.

Other companies provide similar services, but Coinbase stands out because it is the entry point into crypto for people all over the world. As such, it is perfectly poised to succeed as a publicly traded company.

Further, the Coinbase IPO is not a true initial public offering, in that it is taking the less traditional route of direct listing on the Nasdaq. By doing so, it circumvents the expensive relationship with investment banks that help sell shares of a new stock during an IPO. Additionally, Coinbase stays true to its brand of decentralization by leveraging its popularity (and financial records) as a selling point.

What To Consider Before Investing In Coinbase

So, should you invest in Coinbase’s IPO?

Investing in any stock comes with an inherent risk, so you’ll have to rely on your risk tolerance, your motivation for action and your own evaluation of the company’s prospects.

That said, there are many who believe that the company’s strong financial performance in recent years combined with the growing popularity of cryptocurrency as a whole suggests that Coinbase is positioned to perform quite well as a publicly traded company. This should translate to a strong performance on the stock market.

Many see investing in Coinbase as a way to take advantage of the popularity of cryptocurrency without investing directly. At the same time, that link to cryptocurrency means that there are factors to consider that are out of Coinbase’s control. Investors may still want to educate themselves on crypto news, including the coins available via Coinbase and overall cryptocurrency performance.

Whatever you decide, the upcoming release of COIN on the stock market promises to be a historic and exciting event in the financial space. If you choose to invest, remember to set your budget and expectations ahead of time. Never invest more than you can afford to lose.

When Will Coinbase Go Public?

Coinbase has announced that its direct listing is expected to happen on April 14.

Can You Buy Shares of Coinbase?

Anyone will be able to buy Coinbase shares once they become available on the public stock market.

How Much Is Coinbase’s IPO?

It is uncertain what the price of COIN shares will be upon their direct listing. Sales on the Nasdaq Private Market have reached as high as $375 per share.

How Do I Buy Coinbase’s IPO?

By April 14, Coinbase’s direct listing date, you’ll need to have selected a brokerage, set your budget, decided on the type of order you want to place (market or limit), and executed your purchase.