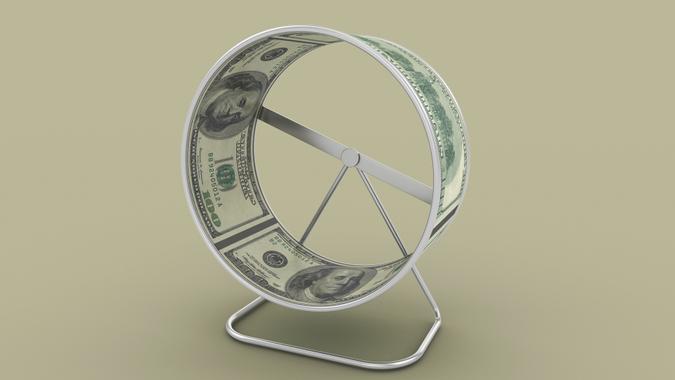 Wall Street traders often caution retail investors about getting in over their heads. But it hasn’t been a problem for Mr. Goxx – in spite of the fact that he’s only about 6 inches tall standing on his hind legs.

See: 8 Best Cryptocurrencies To Invest In for 2021
Find: Here’s How Much You Need To Earn To Be ‘Rich’ in 23 Major Countries Around the World

Mr. Goxx is a hamster who has been day trading cryptocurrency and live streaming it on the social network Twitch, presumably with the help of his anonymous human business partner. His partner also helps keep his office clean and supplies him with daily vegetables for energy.

DISCLAIMER
This content is for entertainment purposes only. Investments shown here are not financial advice.

Goxx doesn’t actually use the computers for trading (as far as we know). Instead, he runs on his treadmill to choose one of 30 different cryptocurrencies, according to a Vice article. Then, he chooses a tunnel: One tunnel means “buy,” and the other means “sell.” Once he’s made his choice, he’s locked out of the tunnels for 20 seconds, so that he doesn’t accidentally sell what he just purchased.

You’re probably wondering how he’s doing. As with most retail investors, he’s had good times and bad. In July, just a month after he started trading, he was showing a loss of 7%. But recently, Goxx reported via Twitter that he was up 19.41%. Vice said these returns outperform the stock market for the past three months. The hamster started with $381 USD, and trades in €20 increments, or about $23 USD.

Just for the record, his portfolio has outpaced Cathie Wood’s ARK Innovation and Warren Buffett’s Berkshire Hathaway in the past few months. Some of Goxx’s favored investments, it would seem, include TRON, which he’s refused to sell every time it’s come up on his wheel — he has purchased the asset five times since June and is up 40% on the crypto. He’s also done well with Ethereum and Bitcoin, according to a Protos.com article.

In spite of his recent success, the entrepreneurial rodent isn’t banking on day trading alone to keep him in hamster treats. He recently introduced The Founder’s Token, the first original Mr. Goxx NFT art. Goxx said in a video on Twitter that he’s looking to fund “a new wing for the Goxx Capital Headquarters” through sales of the NFT. The hamster said he plans to autonomously create and mint his own NFT art in the future.

It is our responsibility to point out that Mr. Goxx, his content and his endeavors are for entertainment purposes only and no one should build a portfolio around a hamster’s investment choices.