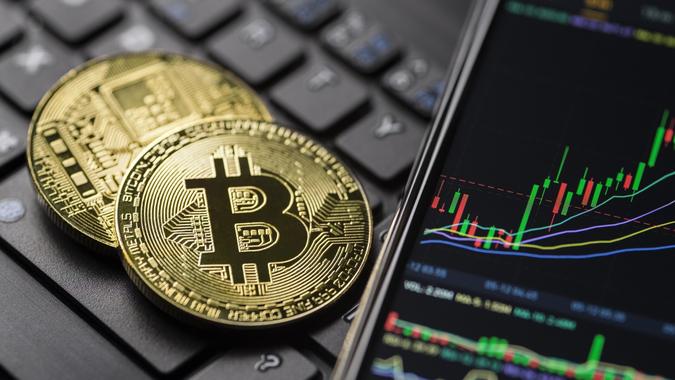 Crypto Trading: Why Knowing the Difference Between ETFs and Futures-Based ETFs Is Key
Find: 8 Best Cryptocurrencies To Invest In for 2021

ProShares’ ETF ended Wednesday with $1.1 billion under management after trading volume topped $1.2 billion, according to a press release — that’s the quickest that an ETF has reached the $1 billion mark, according to Bloomberg. The launch Tuesday was met with almost off-the-charts demand, ranking as the second heaviest-traded ETF debut on record, Bloomberg adds. It also sent the price of Bitcoin to a new record of more than $66,000 high. This morning, Bitcoin was at $62,000, according to CoinMarketCap.

Valkyrie’s ETF aims to solely track the value of Chicago Mercantile Exchange (CME) Bitcoin futures, according to Valkyrie. Bitcoin futures, which are agreements to buy or sell an asset in the future at a specific price, are fully regulated in the U.S. on the CME. The goal of the fund — which does not invest directly in Bitcoin — is to track the value of these products in a liquid basket of securities. “By doing so, BTF provides exposure to a wider audience of investors, advisors and more, without the pitfalls and hurdles typically associated with investing directly in crypto assets,” the company said in a statement.

Unlike Bitcoin ETF applications that the SEC has rejected, the ProShares and fund is based on futures contracts and were filed under mutual fund rules that SEC chairman Gary Gensler has said provide “significant investor protections.” This comes eight years after the first Bitcoin ETF application was filed, and follows the Securities and Exchange Commission’s (SEC) stalling on such approvals. While a far cry from a “pure” Bitcoin-only ETF, the new ETF is giving traders and investors hope that this could pave the way for overall approval.

Stephen Stonberg, CEO of exchange Bittrex Global, told GOBankingRates that Valkyrie Bitcoin ETF’s green light from regulators is another monumental moment for the crypto industry. “The ProShares Bitcoin Strategy ETF listing on the NYSE and Valkyrie Bitcoin ETF’s upcoming listing will lead to wider acceptance of crypto, more rigorous adoption amongst retail and institutional investors, and a subtle harmony between traditional finance and the digital assets sector,” he said. “These listings do not represent the last actions we can expect to see from traditional finance, but the first. If anything, this week in crypto is foreshadowing what’s yet to come.”

VanEck is set to also start trading next week with its own Bitcoin-futures ETF. The firm updated its SEC filing, saying that its VanEck Bitcoin Strategy ETF will be available “as soon as practicable” after this coming Saturday, Oct. 23, according to the filing.

Elliot Johnson, CIO and COO of Evolve ETFs, launched one of the world’s first Bitcoin ETFs, the world’s first Ether ETF and Canada’s first multi-crypto ETF, trading on the Toronto Stock Exchange. He told GOBankingRates that “while there is typically strong first mover advantage, investor interest in crypto is still very early and we expect there to be many successful issuers. That said, investors strongly prefer physical crypto ETFs to futures when they have access to them. These new ETFs in the US are just a step along the way to wider adoption.”

Indeed, in another indicator that things might move faster, Grayscale Investments announced it had filed with the SEC to convert its Bitcoin Trust into a Bitcoin Spot ETF “on the heels of the SEC’s clearance of a Bitcoin Futures ETF,” according to an announcement earlier this week. “As we file to convert GBTC into an ETF, the natural next step in the product’s evolution, we recognize this as an important moment for our investors, our industry partners, and all those who realize the potential of digital currencies to transform our future,” Michael Sonnenshein, CEO of Grayscale Investments, said in the announcement.

Mike Creadon, President of DeFi Devs, Lead Community Developers of Accumulate Protocol, told GOBankingRates that the Valkyrie BTC ETF story is a watershed moment in financial history. “Finally, the nation’s most important regulator is acknowledging what ‘hodlers’ have been saying all along: Bitcoin is a real asset that’s here to stay,” he said.

“Just yesterday, the bond behemoth PIMCO with $2.2 trillion in assets said they’re moving into crypto. This is a natural progression, because like any other financial services firm, you won’t be in business in 10 years if you have no digital asset strategy or exposure to decentralized finance (DeFi),” Creadon continued. “The Valkyrie BTC ETF story is a demonstration of the fact the asset managers need clean exposure to this exploding asset class. No doubt the biggest financial institutions in the world likely sat down with regulators and told them: ‘You have to give us access. We can’t be left on the sidelines any longer.’ History is changing before our very eyes.”