The financial media was abuzz on August 2 as the Dow Jones Industrial Average — the oldest barometer for U.S. stocks — plowed through another barrier and closed at 22,016. That’s a whopping 336 percent growth since the market troughed in March 2009 during the financial crisis. In January of this year, the Dow soared past the 22,000 mark for the first time, and this new milestone has many watching the market carefully to see if the jumps signify a bigger upward shift.

Considering the positive market momentum, you might be tempted to buy shares of the companies that make up the Dow, but impulsive investments are always risky. To give you a better idea of whether now is the time to buy or sell, GOBankingRates spoke with Fox Business anchor and host of “The Intelligence Report,” Trish Regan.

Will the Market Continue to Rise?

It’s always tough to time the market. However, since its 2009 low, the Dow has climbed about twice as fast per year than its historical annual average. According to Regan, that trend should get another boost if Washington can deliver on its promises. “Assuming tax cuts actually pass, we could well be in for upwards of 23k,” Regan said. “The economic agenda of lower taxes and less regulation should stimulate the economy and markets.”

Of course, the White House factor is another influence that’s difficult to predict. If Congress fails to pass legislation to lower corporate taxes and repatriate cash to the U.S. at a lower tax rate, stocks could return to where they were trading before the Trump Bump — about 17,888 on November 4, 2016. If you’re truly a long-term investor and can absorb a short-term blow to your portfolio, you’re okay to dabble here. But if a correction would hinder your finances, then perhaps you should take a cautious approach before jumping into U.S. stocks.

Other Stocks Are Performing, Too

Fortunately for investors in recent years, this Dow peak has been just one milestone for U.S. stocks as the growth in company earnings has accelerated to support stock valuations.

According to Thomson Reuters, with about 70 percent of the companies in the S&P 500 having reported their Q2 earnings by Aug. 2, earnings growth is up more than 12 percent this quarter from the same period a year ago. Also, more firms are beating Wall Street consensus estimates for quarterly revenues and EPS. Major tech companies like Facebook and Alphabet (Google’s parent company) revealed Q2 earnings that beat market expectations.

“We’ve had numerous milestones in recent years,” Regan said of the market surge. “We keep plowing through them to even higher levels.”

More Market Advice: How to Use Quarterly Earnings From Amazon and Facebook to Your Advantage

Though the rising Dow might be a tempting pursuit for hungry investors, Regan warned against concentrating your assets in too few names. The Dow eclipsed 22,000 on August 2, driven by Apple’s 5 percent gain off of its surprisingly strong June quarter earnings.

The temptation would be to ride that horse, but Regan advised caution. “Diversify, diversify, diversify,” she said. “Never bet the family farm on one stock. If you love Apple, buy some shares and look for a good tech fund so you’re well protected.”

One such mutual fund that has stood the test of time is the Columbia Seligman Communications and Information Fund. A lower cost alternative is the Technology Select SPDR Fund (XLK), which owns the tech and telecom stocks in the S&P 500.

Should We Even Focus on the Dow?

The Dow is the granddaddy of the American stock indices, but can it still compete in 2017? The Dow comprises only 30 names, and according to critics, it’s tilted toward yesteryear businesses and brands. Only 5 of the constituents are tech companies, which is a problem because the tech sector accounts for a great proportion of U.S. economic growth. Three of America’s marquee firms — Amazon, Facebook and Google — aren’t in the Dow.

Another potential flaw in the Dow is that it’s a price-weighted benchmark, which means that the weight of each stock in the index is a function of only its stock price. Theoretically, a $100 stock accounts for 10 times more of the Dow than a $10 one. Under this structure, the largest stock in the index is Boeing (BA). Comparatively, Apple (AAPL) is No. 5, despite it having the world’s largest market cap. Few savvy investors would rank Apple this far down a list of even top companies.

Next Steps for Investors

“Investors should always be cautious,” Regan said. Though we might be in the midst of a market climb, you should wait for stocks to pause before aggressively buying, particularly if you can’t weather a potential short-term storm. According to Regan, the safe investing strategy is to “always maintain a diversified portfolio, understand your own limitations for risk and keep some powder dry.” 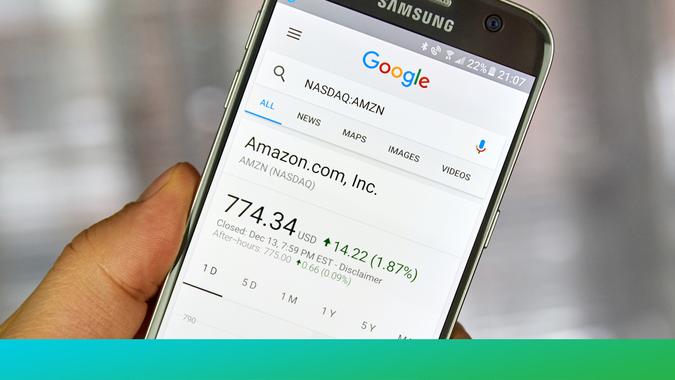 Track your investments and the stock market with Google Finance.