How To Read Stock Charts in Less Than a Minute 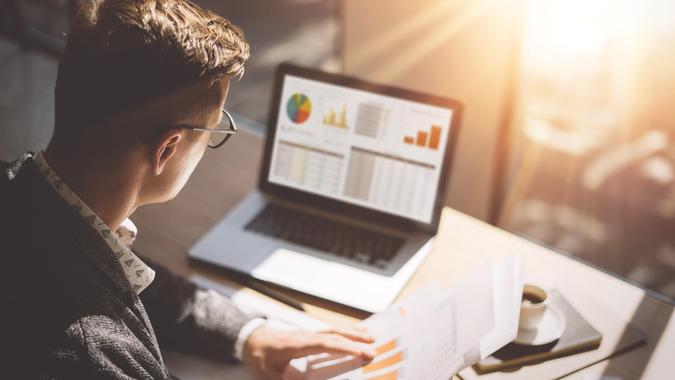 Investing novices might be intimidated at first by the charts that the pros use to get a picture of what’s going on in the stock market. If that’s the case, don’t worry. At first glance, all those jumbles of lines and numbers look completely alien. The truth, however, is that it’s not so complicated once you understand the basics–and learning how to read stock charts is the first step to picking stocks, building a portfolio and becoming a successful investor.

Stock-chart reading basics are important for all investors, not only technical stock analysts who study chart patterns to predict future prices and trends. Once you find a stock with good fundamentals — like strong sales and earnings growth — knowing how to read charts can help you avoid mistakes common with rookie investors.

How Do You Read the Stock Market?

The sheer volume of information presented in a stock quote — things like dividend yield, trading volume and PE ratio — can boggle the minds of investors who are just learning. Each part of the stock quote, however, tells you, the investor, something about the company that you can use to make a wise decision about whether to buy, sell or keep looking.

Here’s an overview of what you need to know about how to read stock charts. But first, set yourself up for success by laying the groundwork.

Stocks charts all have the same basic fundamental components, but their interfaces and controls are different, so they each have a different look and feel. You’ll want to find a platform you like and stick with it–at least at first–so you’re not distracted by cosmetic differences on a new website or app while you’re learning how to read stock charts in the beginning.

Google Finance and Yahoo! Finance are good places to start. They’re widely used, they have clean, user-friendly interfaces and they’re accurately updated in real time. The images used in the tutorial below come from Google Finance.

Investing Language Explained: What Is a Point?

As you’re getting acquainted with the market, you’ll notice analysts talking about individual stocks or entire indices gaining or losing points. In terms of individual stocks, a point represents a single dollar. When stocks lose points, they are actually losing a specific dollar value–points are just an easier way to keep a tally.

A stock’s dollar value determines the impact of the gain or loss of a single point. For example, a stock worth $18 that experiences a six-point drop would suffer a much larger percentage drop in share price than a stock worth $118 would.

Use Ticker Symbols to Search For Stock Charts

Stock tickers get their name from the sound incoming information used to make when it arrived over the telegraph system. A ticker symbol is a one-to-five-letter code used to identify a company. They’re often, but not always, phonetically representative of the company’s name. Amazon’s ticker symbol, for example, is AMZN. That’s the stock and ticker symbol cited in all of the following graph examples. You can see the ticker symbol in the top right.

A Bit of Trivia

Ticker symbols were originally printed on ticker tape machines during the early 20th century. Wall Street’s massive piles of leftovers would be shredded and tossed from tall buildings in New York City as confetti onto celebratory processions below known as ticker-tape parades.

How Do You Read a Stock Chart? 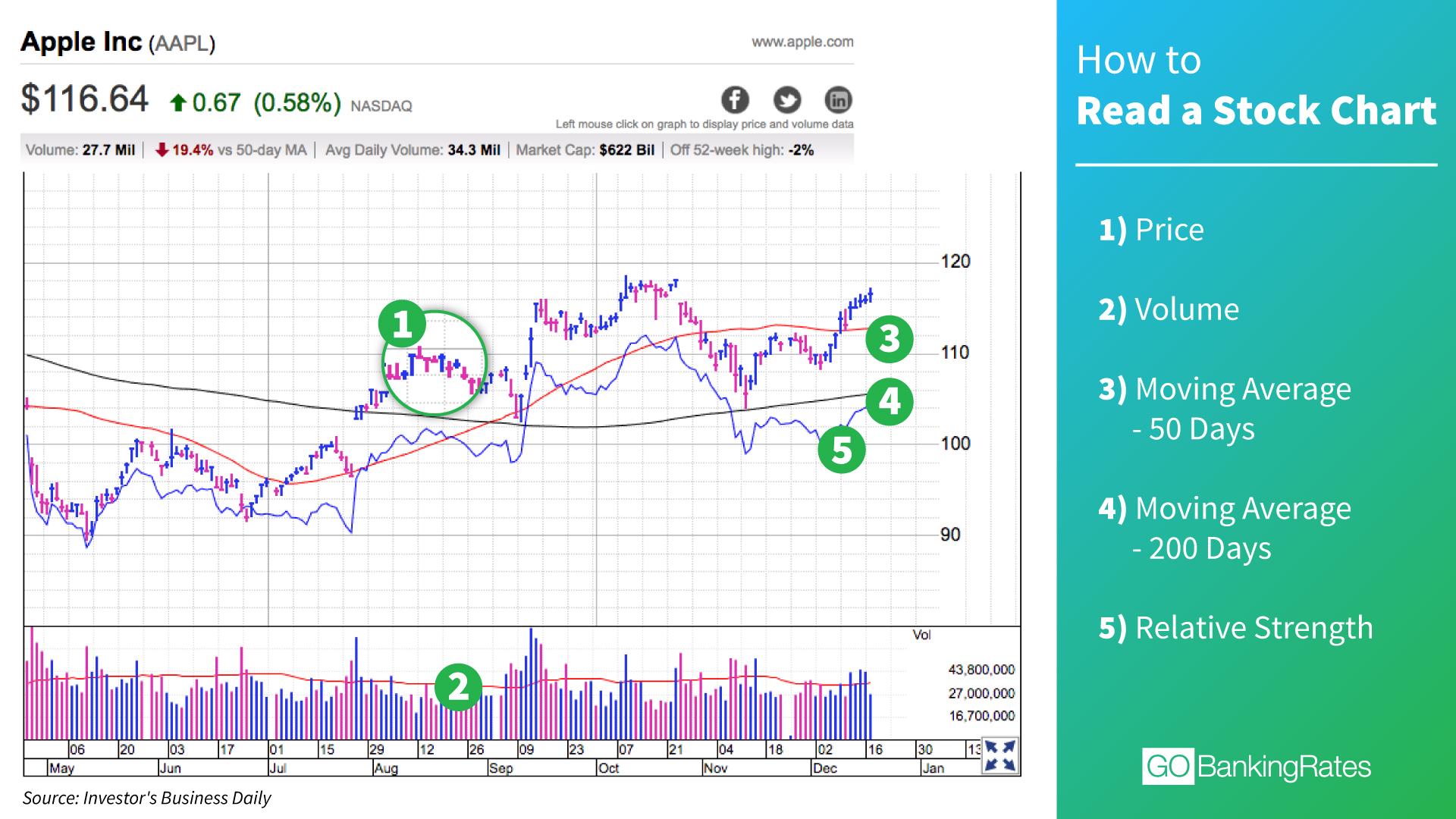 In the first example, you’ll see five years’ worth of Amazon stock history starting in 2016 through today. The timeline progresses horizontally from left to right in chronological order at the bottom of the chart.

In the second example, you can see the stock’s entire history. Just click “max” instead of “5Y” for that perspective. The other options are:

The dark green line that separates the shaded green area below and the white area above is called the trend line. The timeline is horizontal on the bottom of the chart. Running vertically on the left is the stock’s price in dollars. The trend line shows how the stock price changed over time.

In the case of Amazon, you can see that the stock price soared briefly in the late-1990s until the tech bubble burst. Then it hugged the floor well below $100 for several years before finally starting to get some air in the mid-2000s and then skyrocketing vertically to become one of the most valuable stocks in the world in the 2010s.

Trends Over the Years

3. Lines of Resistance and Support Show Trends Within the Trend

As previously stated, trend lines follow price points in a jagged line that reveals the peaks and valleys that emerge along the way. Some of those peaks and valleys are called lines of support and lines of resistance, and investors use them as indicators of when to buy and when to sell.

The ability to spot them is one of the most important technical analysis skills you can learn.

In this example, you can see that AMZN had a hard time breaching $2,000 in August-September 2018–a wise time to sell if you can spot the resistance line. Then, in March 2020, AMZN appears to have bottomed out–the perfect time to buy.

As with anything, hindsight is incredibly helpful here. Lines of support and resistance are easy to spot after they’ve already been established. Trying to spot them in real time, not so much.

As you can see in the examples from before–when placing your cursor on the trend line revealed that day’s price–that same information box also includes a statistic for “volume.”

On May 16, 1997, Amazon’s trading volume was 7.2 million. On Oct. 6, 2017, it was 15 million. Google Finance makes you use the cursor to reveal volume. On Yahoo! Finance and many other platforms, stock charts use small vertical lines near the chronological timeline at the bottom of the chart to represent volume.

Either way, volume is something to consider, but it shouldn’t be the deciding factor for any action you take. It simply shows the level of trading activity associated with a given stock during a given time period. When volume is high, lots of people are buying and selling. This is important to investors because dramatic fluctuations in volume often–but certainly not always–coincide with equally dramatic price changes.

Tools of the Trade

As previously stated, you’ll want to pick a platform to research stocks and learn how to read stock charts. Once you learn, however, you’ll be able to read them all, the same way you can jump on any bike and pedal away the moment you learn how to ride your own.

At some point, you’ll need to open an investment account with a brokerage firm that uses its own charts–you have to have a brokerage account if you want to buy and sell stocks. What you don’t have to do is pay for the privilege. The days of paying trade commissions are over and any brokerage firm you choose shouldn’t charge other fees either. If you handle your own investments, you shouldn’t have to pay for an account. The following are among the best free brokerage firms:

Stock charts let you isolate a specific stock, a fund or an entire index to see whether it’s going up or down over time. All it takes is a glance at the trend line. Within the trend line, you’ll see peaks and valleys that represent price swings. Sometimes, those price swings serve as reliable buy and sell indicators called lines of support and resistance, which more advanced investors can identify in real time.

You can also gather information on trading volume to get the most out of your analysis. That’s all charts are–there is no magic. They’re analytical tools that investors use to guide their decisions. Charts don’t “tell” you anything. They present data in visual form. It’s up to you to learn how to identify and interpret that data for yourself. Successful investors first invest the time it takes to learn the basics.

Barbara Friedberg and Valerie Ashton contributed to the reporting for this article.