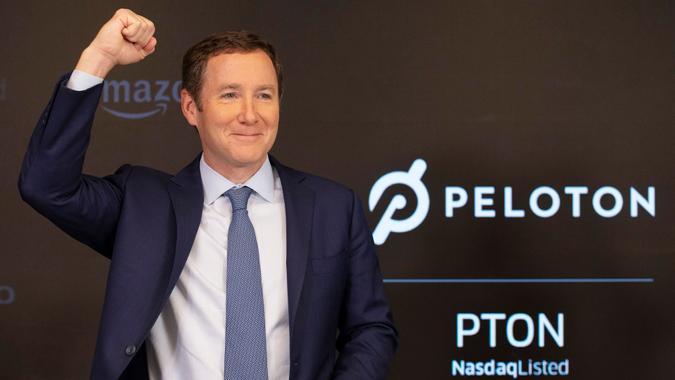 Things seem to be getting rapidly worse for Peloton, as activist investor Blackwells Capital is seeking to remove its CEO  “as a result of his multiple leadership failures,” as well as asking the board to  consider selling the company to a strategic acquirer.

Find Out: Peloton Adds Set Up Fees Amid Financial Struggle – How Much More Will the At-Home Gym Cost You?
Explore: 10 Ways To Build Wealth Fast

In an open letter on January 24 to Peloton’s board, Blackwells Capital CIO Jason Aintabi wrote it has “grave concerns” about Peloton’s direction and performance.

“Remarkably, the Company is on worse footing today than it was prior to the pandemic, with high fixed costs, excessive inventory, a listless strategy, dispirited employees and thousands of disgruntled shareholders. And no wonder, the latter, given that Peloton underperformed every other company in the Nasdaq 100 over the last twelve months,” he wrote in the letter, asking the board to fire CEO John Foley immediately.

According to Blackwells, Foley should be held accountable for his “repeated failures to effectively lead Peloton.”

The list of failures, according to Blackwells, includes misleading Peloton investors that the company did not need additional capital, just weeks before issuing $1 billion of equity; vacillating on pricing strategy, leading to consumer, market and analyst confusion; upending the product roadmap he himself authored, delaying rollouts and missing deadlines; being initially reluctant to work with the Consumer Product Safety Commission despite selling a product that injured at least 29 children and demonstrating a repeated inability to forecast consumer demand, churn, and product returns — to the point of removing related metrics from the Company’s public guidance.

In addition, Blackwells noted that Peloton committed to a 300,000 square foot, 20-year lease for office space in New York City, “the most expensive office and labor market in the country, seemingly because he enjoys living there (and owns a newly-acquired $55 million vacation home nearby)”; hired his wife as a key executive; and led a company that received the worst possible score for environmental disclosure and governance risk, and nearly the worst possible score for social and human rights disclosure, from a respected proxy advisory and governance firm.

“All the while, shareholders have lost nearly $40 billion in wealth. Mr. Foley, in contrast, has sold stock regularly and repeatedly, reaping more than $115 million in proceeds,” Aintabi wrote. “The ride for Mr. Foley is over.”

He added that the company has gotten too big, too complex and too damaged for Foley to lead it.

However, Aintabi did note that Peloton has a large and loyal customer base, skilled employees, great technology and content, and a respected brand. As such, it would be extremely attractive to any number of technology, streaming, metaverse and sportswear companies — such as Apple, Disney, Sony and Nike — “who could extend their presence in the home, in health and wellness and on the screen through Peloton.”

“Given the mess that Peloton has become as an independent company, we are convinced that one or more of these strategic acquirors could provide significantly more value, with substantially less risk, than Peloton is likely to generate for its shareholders on its own,” he wrote.

More: 13 Ways To Invest That Don’t Involve the Stock Market

He added that Blackwells will “not tire from the task of holding Mr. Foley and you responsible for our losses, nor from reminding you of your obligation to maximize value for shareholders.”

On January 20, following reports earlier in the week, Foley said in a note to employees that the company had experienced leaks of confidential information.

“The information the media has obtained is incomplete, out of context, and not reflective of Peloton’s strategy. It has saddened me to know you read these things without the clarity and context that you deserve. Before I go on, I want all of you to know that we have identified a leaker, and we are moving forward with the appropriate legal action. But moving forward, I want to take a moment to talk about some of the changes with you directly,” Foley wrote in the note posted on the company’s website.

Shares of Peloton closed down 23.9% at $24.22 on January 20, wiping roughly $2.5 billion off of its market value, as GOBankingRates previously reported.

See: 10 Stocks Set To Soar in 2022
Learn: What Happens to Your Stock When a Company Goes Bankrupt?

Foley said that the company is continuing to invest in its growth, but that it also needs to review its cost structure “to ensure we set ourselves up for continued success.”

He added that rumors it was halting all production of bikes and treads are false.