Tesla has gotten 832 mentions on Reddit’s retail trading sub-thread, r/WallStreetBets, after the EV manufacturer’s stock dipped 5% on Monday when the results of a Twitter poll implied Tesla TechnoKing Elon Musk would be selling 10% of his shares.

The slight dip wasn’t enough to cause Tesla faithfuls to go on a buying spree, but it also wasn’t enough to make Tesla short-sellers happy. What it did, however, was cause a flurry of memes across the web, which is not surprising as Musk has often been identified as a “meme lord.”

We spent (probably way too much) time on the WallStreetBets subreddit to find some of the best memes and dug deep to unveil their hidden – and sometimes not-so-hidden – meanings. The general sentiment? The dip is hardly anything to worry about; it just gives Tesla investors another chance to mock the short-sellers.

Not a ????????, but gotta be honest I expected worse. from wallstreetbets

The Tornado selfie meme is resurrected every so often in clever ways. This meme, which received 97% upvotes on Reddit, has a lot to unpack. It comes with the comment, “Not a [rainbow bear] but gotta be honest, I expected worse.” To understand the meme, you need to understand some retail trading terminology.

The rainbow and bear emojis, together, translate into a gay bear, since a rainbow is a symbol for the LGBTQ+ community. Bears are traders who do not believe a stock will rise, and may even try to “short” the stock, to earn money when it drops.

This meme depicts the sentiments of bears – or Tesla shorts. Simply, they were expecting more of a drop and a chance to sell and profit. Instead, the slight dip sent Tesla bulls running to invest. Many bulls had expected the stock to dip even lower, with commenters on the thread saying they expected a 10% drop but took the opportunity to buy anyway.

Tesla down 6.9% pre-market from wallstreetbets

Using the famous Ben Stiller “What Is This?” meme from Zoolander, u/playoutsideplay posted a meme asking, “What is this a pre-market dip for ants?” Their timing was impeccable as Tesla had just hit 6.9% down. This one is pretty self-explanatory, as it was a really tiny dip. But it’s also one of the funniest memes on the thread thanks to the clever double entendre.

Many Tesla shareholders (and shorts, for that matter) expected a much bigger dip pre-market on Monday. This clever meme from the movie Sonic the Hedgehog says it all, with Tesla holders – depicted by James Marsden as Tom in the movie – pondering “How are you not dead?” and the lovable hedgehog (aka Tesla stocks) saying, “I have no idea.” 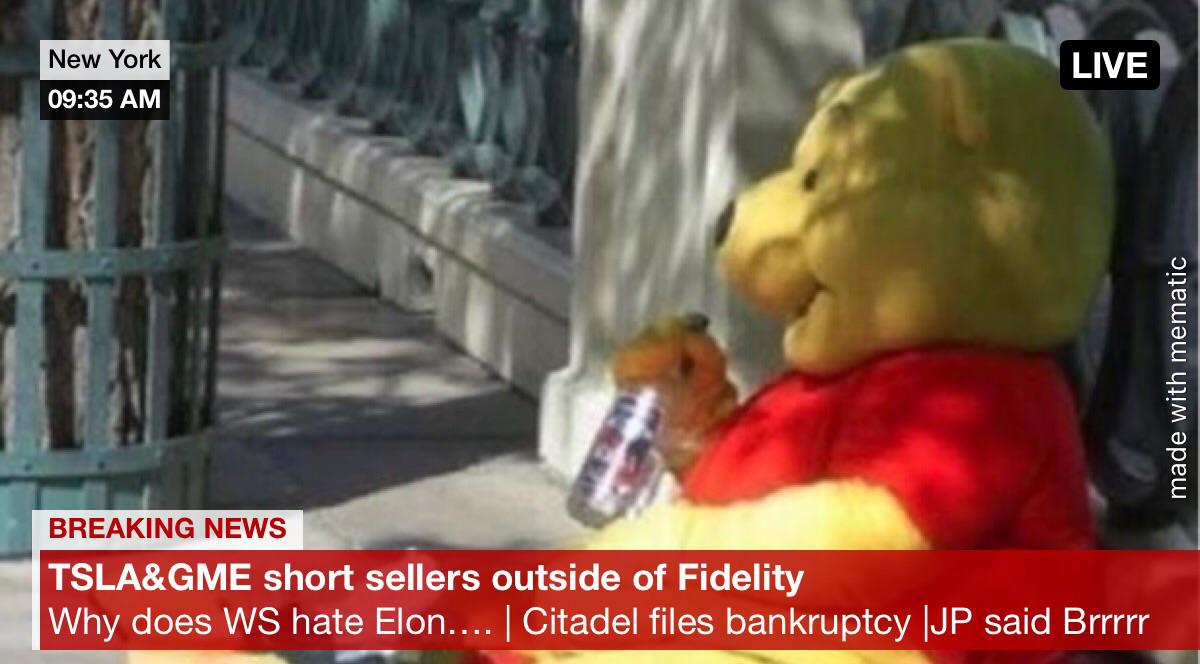 This meme depicting Winnie-the-Pooh as a homeless “bear” received 96% upvotes on Reddit. Designed to look like a news report out of New York, the tagline says, “Breaking News: TSLA&GME short sellers outside of Fidelity,” while the original poster, u/Odd_Fox7192 added further explanation, sharing: “Bears after shorting TSLA.”

The Netflix series “Squid Game” has sparked its share of memes. This one depicts Elon Musk as Younghee, the doll in the first episode of “Squid Game” who declares “Red Light,” and terminates anyone she catches moving.

Musk saying “Red Light,” in the meme can have a few different meanings. First, it shows the power he may hold over Tesla stock, moving the market (albeit, not as much as people imagined) with his intention to sell 10% of his shares. Mostly, it’s a suggestion from the meme-maker not to sell. Just stay still. Hold. Everything will be fine.

Never bet against Musk from wallstreetbets

Another “Squid Game” meme mocks the Tesla shorts, or “gay bears.” The meme, which received 97% upvotes, shows Player 001 in “Squid Game” happy and carefree over the weekend, anticipating Tesla stock to drop. On Monday, Player 001 is huddling in a corner, sad, shocked and defeated.

The caption says only: “Never bet against Musk.”