DJIA: What Is the Dow Jones? 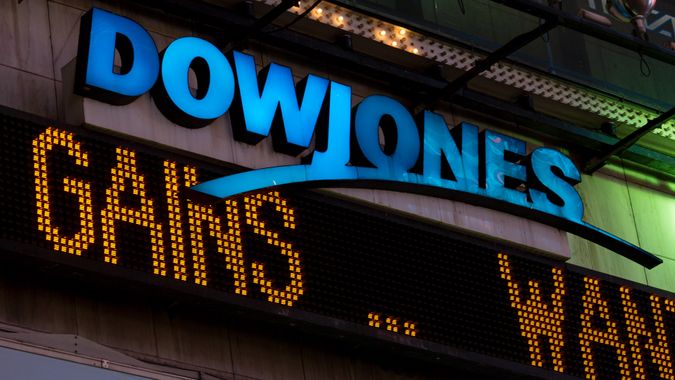 GOBankingRates compiled 11 facts that everyone should know about the Dow Jones so that you can be a more informed investor — and understand whether 34,548.53 is a number to get excited about when it comes to the Dow.

1. The Dow Is a Stock Index

The Dow Jones Industrial Average, created in 1896, is a stock index composed of 30 large, “blue chip” corporations. The Dow has expanded to 30 companies from 20 in 1928.

Today, the index includes a variety of corporate heavyweights, ranging from:

2. The Dow Has Interesting Ties to The Wall Street Journal

Three men founded the Dow Jones index, but only two of them carry the name. Charles Dow was an American journalist who founded The Wall Street Journal in 1889. He founded Dow Jones and Company in 1882 with statistician Edward Jones and Wall Street Journal journalist Charles Bergstresser. Charles Dow developed the Dow Theory, a series of principles for analyzing market behavior. His work would later become the basis for future advancement in technical analysis.

3. The Dow Jones Is Not Tied to Edward Jones

As far as Dow Jones historical data goes, you now know that Charles Dow and Edward Jones have their names tied to the Dow Jones index. But it’s important to note that this Edward Jones was a statistician who died in 1920.

4. None of the Original Companies Remain on the Index

Today, none of those original companies still trade on the Dow. General Electric lasted the longest, but it was dropped from the Dow in June of 2018 after more than a century on the index. GE was replaced by the Walgreens Boots Alliance (WBA) drugstore chain.

The DJIA is not a true average as its name might suggest. For this reason, people are frequently confused by how the Dow is calculated.

To obtain the value of the DJIA, you must add the prices of all 30 stocks and then divide that figure by a divisor. The current divisor is 0.15198707565833, according to The Wall Street Journal. That means you would multiply the total value of all Dow 30 stocks by about seven, which means that every $1 price change in one of these 30 stocks leads to about a seven-point change in the DJIA.

The Dow’s surge to a record closing high of 34,548.53 on May 6 might seem like a big deal, but when looked at from the context of the overall market, it’s not all that earth-shattering. The U.S. stock markets have been on a long bull run, and plenty of indexes have reached record highs in 2021 – including the S&P 500 and Nasdaq. In fact, when the Dow hit its record close on May 6, it represented a gain of only 0.9% for the day.

7. The DJIA Is Less Diverse Than Another Index

The Dow Jones might grab many of the financial headlines, but another index provides a better representation of broader market performance. Back at the end of the 19th century, the Dow’s 12 original companies provided a decent look at the overall performance of a much smaller stock market.

But today, the S&P 500 better captures the broader market performance because of its sheer size. The S&P 500 also includes massive, market-changing stocks that the Dow has ignored. These stocks include Facebook (FB), Google-parent Alphabet (GOOGL), Amazon (AMZN) and Netflix (NFLX).  As its name suggests, the S&P 500 includes 500 companies listed on the New York Stock Exchange and Nasdaq, and accounts for about 80 percent of available market capitalization.

8. The Dow Adds and Drops Companies From Its Index

Companies grow and mature over time. Sometimes, small tech companies that started on the Nasdaq become tech giants that play a huge role in the U.S. economy. Given their weight, the Dow Jones might add one of these stocks to reflect the strength of the overall market, replacing another company on the list.

Apple (AAPL) and Microsoft (MSFT) were the top gainers on the Dow in 2020, with stock price increases for the year of 82.3% and 42.5%, respectively. Much of Apple’s gain was driven by excitement over the release of the iPhone 12, which hit the market in October. Microsoft, like other tech stocks, benefited from a rise in remote working during the COVID-19 pandemic, which increased demand for computers and software.

While tech stocks showed resilience and growth during the COVID-19 pandemic, other companies saw a big drop in business and share price. One of those was Boeing (BA), which saw its stock price sink 33.9% in 2020 for the biggest decline on the Dow amid a slowdown in air travel. Boeing also was hurt by problems getting its 737-Max aircraft line back in the air following a pair of high-profile crashes.

Another Dow stock that performed poorly was Walgreens Boots Alliance, which suffered a 29.4% decline in 2020, due in part to lower foot traffic in its UK Boots stores.

When it comes to the Dow chart, its founders wanted you to be able to read and understand it easily. Here’s how:

Reading any stock chart is a good way to notice stock price and volume trends. You can use Dow chart information as a data source for stock market index research, and it might also be useful if you’re considering trading a Dow index fund.

When was Dow Jones founded?

What role does the Dow play in the stock market?

Which companies make up the Dow Jones?

Barbara Friedberg contributed to the reporting for this article.