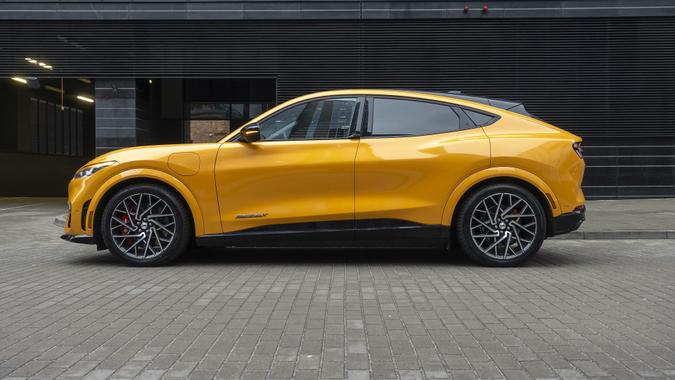 In an effort to match up with “pure EV players” such as Tesla, Ford is reportedly considering spinning off its electric vehicle (EV) unit from the legacy business, according to Bloomberg.

Compare: The 6 Most Affordable Electric Vehicles
Learn: Ford Shifts to Electric Cars, Plans To Spend at Least $20B to Reorganize — How It’s Impacting Stock Prices

A spinoff could generate similar earnings Tesla has enjoyed, with  a market value approaching $1 trillion, according to Bloomberg.

The latest report made Ford stock jump on Feb. 18, The Street reported.

“We are focused on our Ford+ plan to transform the company and thrive in this new era of electric and connected vehicles,” Ford told Bloomberg when asked about a potential spinoff. “We have no plans to spin off our battery electric-vehicle business or our traditional ICE business.”

Ford’s Mustang Mach-E was also Consumer Reports’ “Top Pick” for an EV in 2022, replacing the Tesla Model 3, as was announced on Feb. 17.

“The Mach-E crossover is wrapped in Mustang heritage and executed with the detail associated with a century-old automaker. We took instant notice, and so did car buyers. As a result, the Mustang Mach-E effectively bumped Tesla from the 10 Top Picks list this year,” according to  Consumer Reports.

Related: 25 Secrets Elon Musk and Every Other Rich Person Knows

During an investor earnings call earlier this month, CEO Jim Farley said that the company is “building new muscles, and that certainly includes scaling up our production of electric vehicles, as I mentioned. We under-called the demand for our first wave of EVs. The Mustang Mach-E, the E-Transit, the F-150 Lightning,” according to a transcript of the call.

In the past six months, the company said it doubled its 2023 planned capacity for EVs to 600,000 units a year, Farley added.

“In the coming months, we’ll break ground on the BlueOval City electric truck plant in Tennessee. It will be the largest, the most advanced manufacturing complex in our history, and it will produce Ford’s second generation of a full-sized electric pickup in high volumes starting in 2025. And at the same time, we have three large-scale battery plants in Tennessee and Kentucky, which will be coming on stream with capacity to produce enough battery cells for more than 1 million vehicles a year,” he said.

See: Here’s How Much You’d Save on Gas With a Tesla and Other Electric Cars
Find: 6 Best EV Stocks To Buy Now: Top Electric Car Companies To Invest In

In September, Ford Motor and South Korean battery supplier SK Innovation announced plans to invest $11.4 billion and create 11,000 new jobs for the production of new EVs and advanced lithium-ion batteries. Deemed “the largest ever U.S. investment in electric vehicles at one time by any automotive manufacturer,” the venture will begin in 2025, as GOBankingRates previously reported.