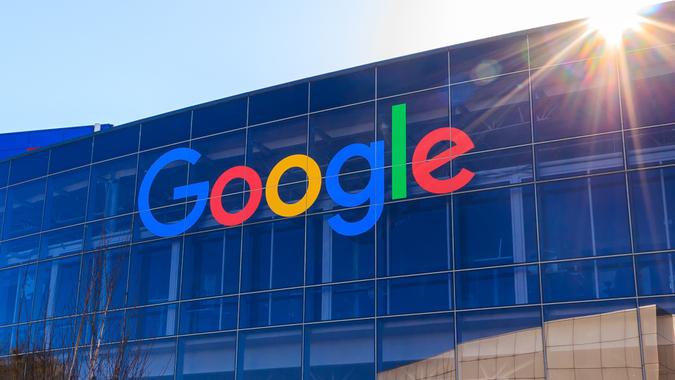 See: When These Big Companies Are Planning To Return to the Office
Find: Google Invests In Office Space, Will Spend $7 Billion on Real Estate in 2021

“Over the last year, people have turned to Google Search and many online services to stay informed, connected and entertained,” Sundar Pichai, CEO of Google and Alphabet, said in the release. “We’ve continued our focus on delivering trusted services to help people around the world. Our Cloud services are helping businesses, big and small, accelerate their digital transformations.”

Alphabet reported EPS of $26.29, compared to consensus EPS estimate of $15.56, and revenue stood at $55.3 billion, compared to estimates of $51.71 billion, according to Seeking Alpha.  Google’s revenue, up 34% from the same quarter last year, was driven by a growth in advertiser revenue and revenue from Google Cloud, according to the earnings statement.

See: Microsoft Wins Army Contract for Augmented Reality Headsets
Find: How Much Is Satya Nadella Worth?

“Over a year into the pandemic, digital adoption curves aren’t slowing down. They’re accelerating, and it’s just the beginning,” Satya Nadella, Microsoft CEO, said in the earnings statement. “We are building the cloud for the next decade, expanding our addressable market and innovating across every layer of the tech stack to help our customers be resilient and transform.”

“The Microsoft Cloud, with its end-to-end solutions, continues to provide compelling value to our customers generating $17.7 billion in commercial cloud revenue, up 33% year over year,” Amy Hood, executive vice president and Microsoft CFO, said in the release.

While the short-term market remains volatile, both Google and Microsoft have proven to be worthy long-term investments — just take a look at their share price history. Investors continue to debate when the next crash could take place, but if you’re looking to stick your money somewhere and keep it there for a good while, you probably won’t go wrong with these tech giants. Especially seeing as the pandemic has only bolstered their revenue and EPS growth.