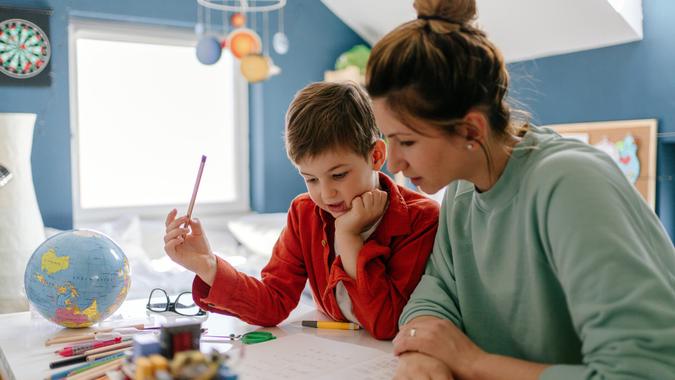 From rearranging work schedules to helping with remote learning, “pandemic parenting” has been reshaping the workforce.

A new GOBankingRates survey finds that a staggering 54% of parents with children under 10 had to adjust their work hours or their job status in some capacity due to childcare.

“The data shows that many parents have had to cut back hours, and some two-parent households now have one parent at home full-time who is no longer working because the children need full-time care with school and daycare not being a part of the equation for a very long time,” Carter Seuthe, Credit Summit CEO tells GOBankingRates.  “This has put a strain on all families in various ways, and I think we’ll continue to see the data reflect this. Going from a dual-income household to one is never an easy adjustment, even if you’re cutting out daycare costs. Households are also spending much more on food and household goods than normal with children home all day.”

Related: Nearly Half of All Americans Missed Rent or Mortgage Payments Due to COVID-19, New Study Reveals

“This makes perfect logical sense, those kids 10 and under cannot be left on their own to supervise themselves and if you are a single parent or in a household where a work from home option was not made available to you it makes perfect sense that over half of those parents with a child under 10 had to make adjustments to their work schedule due to childcare,” Murray says.

Another key finding of the survey is that 47% of parents with at least one child under 18 living with them lost their job at some point during the pandemic, and the figure is rather similar, at 46%, for those with a child under 10. 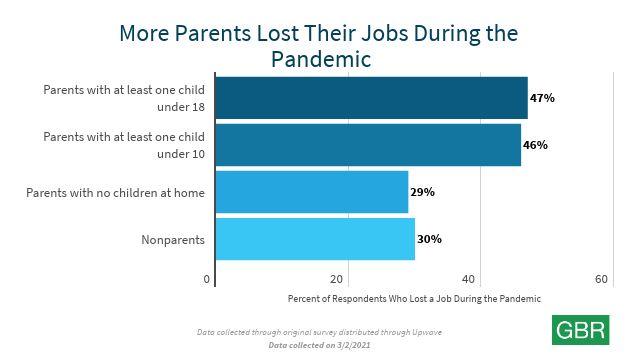 Also sobering is the survey’s finding that 29% of parents with at least one child under 10 at home lost their job during COVID and are still unemployed.

Read More: 22% of Americans Who Lost Their Jobs During the Pandemic Remain Unemployed, Survey Reveals

“That’s an alarmingly high number,” GOBankingRates associate researcher Julia O’Brien says. “This is most likely caused by there not being enough childcare options for the respondent to go back to work. Even if there was an employment opportunity if you are a single parent how are you supposed to go back to work if you have a child under 10 at home who can’t watch themselves and no school is open.”

Discover: 40 Cities That Could Be Poised For a Housing Crisis

In terms of whether overall spending has increased during the pandemic, 45% of parents of kids under 10 say their spending increased.

“Kids are expensive! And having kids in the house 24/7 will lead to more purchases whether it be needing more groceries for snacks/lunches, supplies for virtual learning, or just buying more toys and or games for the child who can no longer go to school or congregate with all their friends,” GOBankingRates’ Murray says.

To compare, the figure decreased to 21.45% for respondents who are not parents and to 15% for parents with no children at home. 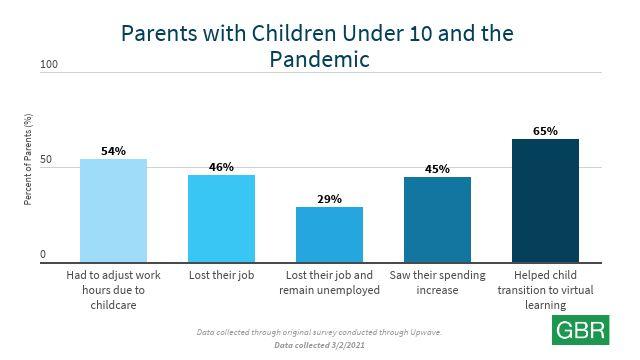 In the News: A Fourth Stimulus Check Might Be on the Way