How Rich Is George Clooney? 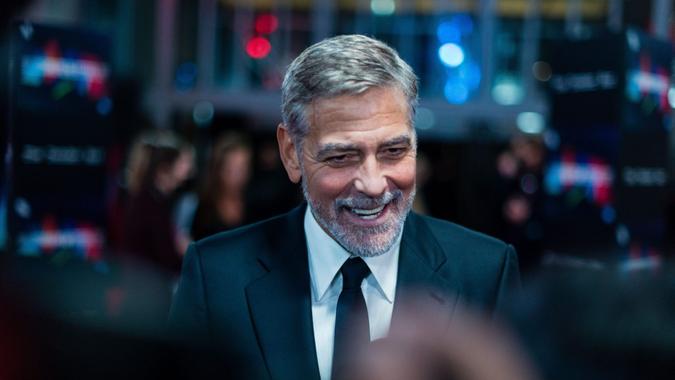 To say George Clooney is a busy man is an understatement.

He stars in a new romantic comedy, “Ticket to Paradise” with Julia Roberts, scheduled for release in October. He has a film in the works for Apple Studios with another former “Ocean’s Eleven” co-star, Brad Pitt, and recently directed “The Tender Bar for Amazon” starring Ben Affleck and Tye Sheridan. He continues his philanthropy and activism across the world, and, oh, is raising twins with his wife, Amal.

Build Wealth: How To Get Rich With a Normal Job
2022 Stimulus Checks: Is Your State Giving Out Money This Year?

With a net worth estimated at $500 million, Clooney can afford to pick and choose his projects. Last December, he told The Guardian he turned down a multimillion-dollar commercial gig because it didn’t feel right.

“I was offered $35m for one day’s work for an airline commercial, but I talked to Amal about it and we decided it’s not worth it. It was [associated with] a country that, although it’s an ally, is questionable at times, and so I thought: ‘Well, if it takes a minute’s sleep away from me, it’s not worth it.'”

Read on to learn more about George Clooney, a two-time Academy Award winner, as he turns 61.

George Clooney was born May 6, 1961, in Lexington, Kentucky. His father, Nick, was a local news anchor and his aunt, Rosemary Clooney, a singer and actress who starred with Bing Crosby in “White Christmas.”

“My dad says: ‘I spent the first half of my life being Rosemary Clooney’s brother and the second half being George Clooney’s father,'” George told The Guardian.

A baseball player in high school, he tried out for the Cincinnati Reds but wasn’t offered a contract. He entered college at Northern Kentucky but dropped out in 1981 and did odd jobs until he had a chance to work as an extra on a movie being filmed in the area. Although the movie never was released, the experience gave him the confidence to move to Hollywood and work toward his big break.

After a short marriage to actress Talia Balsam, Clooney was a bachelor for years until he met human-rights and international law attorney Amal Alamuddin. After a whirlwind romance lasting just seven months, they married in September 2014 in a lavish Italian ceremony with an estimated price tag of $4.6 million, according to E! Online. In June 2017, they welcomed twins Ella and Alexander.

After landing in Hollywood, Clooney had a variety of small parts before landing recurring roles in “The Facts of Life,” “Roseanne” and “Sisters.” In 1994, his big break came when he was cast as Dr. Doug Ross in “ER.” One of the six original cast members, he played Ross for five seasons before leaving to embark on a film career. His starring role in 2001’s “Ocean’s Eleven” cemented his status as Hollywood royalty. He later went on to star in the sequels, “Ocean’s Twelve” and “Ocean’s Thirteen,” as well as films such as “Gravity,” “Michael Clayton” and “The Perfect Storm.”

Clooney is also an accomplished director, producer and writer. In 2013, he took home the Academy Award for Best Motion Picture of the Year for “Argo” as one of the producers. In 2006, Clooney won an Oscar for Best Actor in a Supporting Role in “Syriana.”

Additionally, the Hollywood Foreign Press honored Clooney with the prestigious Cecil B. DeMille Award at the 2015 Golden Globes. The award is designed to pay homage to those who have made exceptional contributions to the entertainment industry.

Two weeks after the twins’ birth, Clooney announced the sale of his popular Casamigos tequila company. Clooney and partners, Rande Gerber — restaurateur and husband to supermodel Cindy Crawford — and Michael Meldman, sold the company to Diageo for as much as $1 billion.

Clooney, Gerber and Meldman founded Casamigos — which translates to “house of friends” — in 2013, and the ultra-premium tequila quickly became popular among Hollywood stars and spirit lovers. Diageo paid $700 million for the brand, with the potential for an additional $300 million to come based on sales performance over the next decade, according to CNBC.

The Clooneys divide their time among several homes in multiple countries, which were described by Architectural Digest in a December 2021 article.

Clooney’s first major real estate purchase came in 1995 when he bought a 7,354-square-foot Studio City, Calif., home from rocker Stevie Nicks for $2.2 million. The home has undergone extension renovations since.

In 2002, he bought Villa Oleandra on the shores of Lake Como in Italy for $7 million, and he also owns the property next door, Villa Margherita. In 2009, he added a custom home in Los Cabos, Mexico, and sold it in 2016 to a Mexican billionaire.

In 2014, the newly married Clooneys paid $13 million for a home and property on the English island of Sonning Eye along the Thames River. Two years later, they paid a reported $14.7 for a condo occupying the full floor of a high-rise in Midtown Manhattan, and last year, they bought Domaine du Canadel, an 18th-century wine estate in Brignoles, France. The purchase price was $8.3 million, Architectural Digest reported.

Through the years, George Clooney has used his star power, and his bank account, to help others across the globe. Most recently, he and a group of other Hollywood stars joined with the Los Angeles Unified School District to form the Roybal School of Film and Television Production. The magnet school is scheduled to open this fall and will provide opportunities in the entertainment industry for students from underserved communities. Other celebrities joining in include Kerry Washington, Eva Longoria and Don Cheadle, and these founding members will serve on the school’s advisory board.

This isn’t the first time he and Cheadle have worked together. In 2007, they joined forces with others, including Matt Damon and Brad Pitt, to found the human rights organization Not On Our Watch, which aimed to put overlooked international crises on the global radar. The group since merged with another organization, The Sentry, which works to expose entities and individuals “connected to grand corruption and violence.”

The Sentry is a partner of the Clooney Foundation for Justice, founded by George and Amal Clooney to hold accountable those who commit international crimes and work for justice for the victims of mass atrocities and corruption. They bring their individual and shared experiences to their role as the group’s presidents – Amal as a human rights lawyer and George as an advocate for holding those responsible for genocide and other crimes of atrocity accountable.

In 2019, he led a boycott of hotels owned by the Sultan of Brunei because of the country’s attempts to sentence homosexuals to the death penalty.

Previously, Clooney has worked to raise millions of dollars in the aftermath of events such as 9/11, Hurricane Katrina, a tsunami in Indonesia and an earthquake in Haiti.