Receiving even one career Grammy nomination is a very big deal. However, some of the music industry’s most gifted artists, producers and composers have earned several dozen nods.

Seriously talented, these professionals have churned out hit after hit, because they’re just that good. Fans also can’t get enough of their work, driving their total record sales to an equally remarkable level.

The 63rd Grammy Awards will be held on Sunday, March 14, celebrating the top music industry talent of the year in 83 categories. However, this is also a time to honor professionals most repeatedly recognized by the Recording Academy over the years, as their contributions have helped shaped entire genres.

Collecting Grammy nominations and selling millions of records isn’t an easy task, but these iconic artists, producers and composers make it appear effortless. Keep reading to learn how many records top Grammy nominees have sold throughout their illustrious careers.

Last updated: March 12, 2021
Make Your Money Work Better for You Find Out: How Much Are This Year’s Top Grammy Nominees Worth? The legendary Bob Dylan has won 10 Grammys, including the Lifetime Achievement Award for 1991. Five of his albums have reached the No. 1 spot on the Billboard charts, including “Desire,” “Modern Times,” “Blood on the Tracks,” “Planet Waves” and “Together Through Life.”

See: 8 of the Most Notorious Music Rights Battles of All Time More: Who Knew These 15 Things Were Invented by Celebrities? He rose to fame as part of the boy band ‘N Sync, but Justin Timberlake won all 10 of his Grammys as a solo artist. In fact, four out of five of his studio albums have reached the No. 1 spot on the Billboard 200 chart, with only his debut album “Justified” peaking at No. 2. She’s won 10 Grammys and Taylor Swift is nominated for six more this year. Eight of her albums secured the No. 1 spot on the Billboard 200, including her most recent “Evermore” and “Folklore” — both released in 2020.

See: The 27 Richest Women in Music The female artist with the most wins, Alison Krauss has been honored with a remarkable 27 Grammys. This includes two wins in the coveted album of the year category for “Raising Sand” and the “O Brother, Where Art Thou?” soundtrack.

Find Out: Iconic Artists Who Were Scammed Out of Royalties Best known as the “Queen of Soul,” Aretha Franklin won 18 Grammys during her career. This includes the Lifetime Achievement Award for 1994 and the Grammy Legend Award for 1991. Sadly, she passed away on Aug. 16, 2018. A 15-time Grammy winner, Eminem has been honored with six wins for best rap album. He’s released 11 studio albums and all but one reached the No. 1 spot on the Billboard 200 — “The Slim Shady LP” peaked at No. 2.

Read: 30 Celebrities Who Went From Rags to Riches The iconic Barbra Streisand has won eight career Grammys, including the Lifetime Achievement Award for 1995 and the Grammy Legend Award for 1992. She’s scored an incredible 34 top 10 albums, including “People,” “The Broadway Album” and “Guilty.”

See: 15 Famous People Who Came Out of Retirement and Made a Fortune A 13-time Grammy winner, country music legend Emmylou Harris been honored in a variety of categories, including a win for best female country vocal performance. She was inducted into the Country Music Hall of Fame in 2008.

Find Out: Musicians Set To Lose Millions to COVID-19 More: How Rich Are These Past Grammy Winners? A nine-time Grammy winner, Dolly Parton was honored with the Lifetime Achievement Award for 2011. On the Billboard Top Country Albums Chart, 46 of her records have ranked in the top 10 — including eight in the No. 1 spot — such as “Pure and Simple,” “Eagle When She Flies” and “9 to 5 and Odd Jobs.” A country music legend and a pop star, Willie Nelson has won 10 Grammys for his work in both genres. He’s been honored with some of the Recording Academy’s most prestigious awards, including the Lifetime Achievement Award for 2000, the Grammy Legend Award for 1990 and the President’s Merit Award for 1986. One of the top Grammy winners of all time, rapper Kanye West has been honored with 21 career statuettes. This year, he’s nominated for best contemporary Christian music album for “Jesus is King.” Famed composer John Williams has won a remarkable 25 Grammys. He’s worked on the soundtrack for hundreds of films, including a 42-year history with “Star Wars,” spanning nine movies in the franchise. In fact, this year he’s nominated for best score soundtrack for visual media for “Star Wars: The Rise of Skywalker.” Williams has sold

Read: The Bestselling Albums of All Time One of the most prestigious names in music, it’s not surprising that Stevie Wonder has been honored with 25 career Grammys. He’s only one of three artists to win album of the year three times — “Songs in the Key of Life,” “Fulfillingness’ First Finale” and “Innervisions.”

See: 28 of the Highest-Grossing Concert Tours of All Time The most nominated female artist in Grammy history, Beyoncé has been honored with 24 statuettes. She started her career as a member of Destiny’s Child, and has since found phenomenal success a solo artist with six No. 1 albums — “I Am…Sasha Fierce,” “Beyoncé,” “Dangerously in Love,” “Lemonade,” “4” and “B’Day.”

Find Out: Blue Ivy, North West and 58 More of the Richest Celebrity Children A member of iconic English rock band the Beatles, Paul McCartney went on to launch a successful career as a solo artist. He’s won 18 career Grammys, including the Lifetime Achievement Award for 1990. This year, he’s nominated for best boxed or special limited edition package for “Flaming Pie,” Collector’s Edition.

More: 25 Singers Who Left Their Bands and Still Rake In Cash Legendary musician, arranger and producer Quincy Jones is the most celebrated living artist in Grammy history with 28 total wins. This includes the Grammy Legend Award for 1992 and the Recording Academy Trustees Award for 1989. The rap artist with the most wins in Grammy history, Jay-Z has collected a total of 22 statuettes. He’s scored 14 No. 1 albums, including “4:44,” “The Black Album” and “Magna Carta… Holy Grail.” This year, he’s nominated for song of the year and best R&B song for “Black Parade” and best rap song for “Savage.”

Methodology: For this piece, GOBankingRates looked at the Recording Academy’s data and found every artist, composer and producer that has been nominated for more than 30 Grammys. After sourcing these artists, GOBankingRates used sales figures from the Recording Industry Association of America to find the total certified sales for each artist. 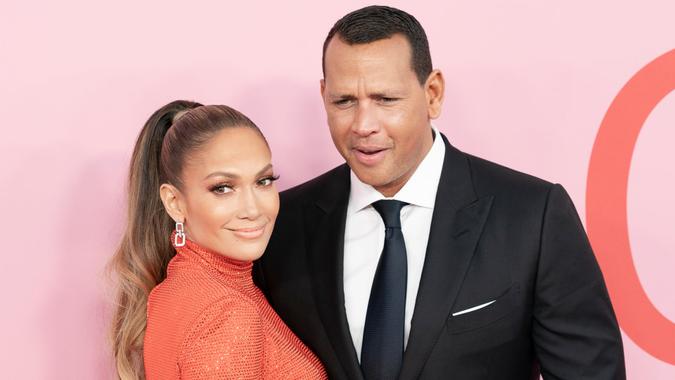 What J. Lo and A-Rod Breaking Up Would Mean for Their Finances

With their relationship in flux, so are ther finances.

> Net Worth > Celebrities > How Many Records Have Barbra Streisand and These Other Top Grammy Nominees Sold?