Legendary heavyweight Michael Gerard Tyson has a net worth of $3 million, according to Celebrity Net Worth. He was — at the height of his boxing career — worth hundreds of millions. A 1992 conviction for rape, retirement from boxing, and lavish spending depleted his fortune, however, and he filed for bankruptcy in 2003.

Click through to learn six secrets of the super wealthy.

Although most people would be pretty thrilled with a net worth of $3 million, it might be hard for Tyson to feel the same way given that his career boxing earnings of $700 million were enough to make him the 14th highest paid athlete of all time, according to Forbes. Those earnings included purses of $30 million for his fight with Evander Holyfield.

After his retirement, Tyson’s free-spending ways ultimately led to bankruptcy in 2003, with $23 million in debts that included a $9 million divorce settlement with his second wife, Monica Turner, $13.4 million in unpaid U.S. taxes, and $4 million in unpaid British taxes.

Although making and then losing over half a billion dollars can’t have been easy, Tyson appears to be another celebrity challenging author F. Scott Fitzgerald’s assertion that American lives don’t have a second act. Tyson has managed to resurrect his finances with a successful career as an actor and businessman.

Check Out: The Slippery Slope That Led These Celebrities From Riches to Rags

In 2009, just six years after declaring bankruptcy, he made a star turn with a memorable cameo in the hit comedy “The Hangover,” then reprised himself in the 2011 sequel “The Hangover Part II.” He has since appeared in a variety of entertainment projects, including “Entourage,” “How I Met Your Mother,” “Law and Order: SVU,” the “Scary Movie” franchise, and even voicing himself in the animated TV series “Mike Tyson Mysteries.” More recently, Tyson appeared in a Chinese action film with Steven Seagal called “China Salesman,” which is slated for a U.S. release on June 15, 2018.

Tyson also released his tell-all memoir — “Undisputed Truth” — in 2014, co-written with Larry Sloman. The two paired up again in 2017 with the book “Iron Ambition: My Life with Cus D’Amato,” the story of Tyson’s relationship with his former trainer.

Tyson revealed in January 2018 that he would be opening a 40-acre cannabis resort that will include 20 acres of marijuana cultivation in the Mojave Desert a little over 100 miles north of Los Angeles with his business partners Robert Hickman, Jay Strommen and Jennifer Wood. The long-term plan for the Tyson Ranch includes an edibles factory, upscale campground, the Tyson Cultivation School, a supply store and an amphitheater.

Mike Tyson was born in Brooklyn, New York, in 1966. His difficult childhood, marked by an absentee father and an addict mother, culminated in Tyson joining a local gang called the Jolly Stompers who committed robberies. By the age of 13, Tyson had been arrested 13 times.

Tyson’s life changed at age 14 when he met trainer Constantine “Cus” D’Amato — who will be played by Bruce Willis in an upcoming biopic called “Cornerman.” D’Amato helped mold Tyson as a boxer and guided his career. On Nov. 22, 1986, the 20-year-old Tyson became the youngest heavyweight champion in boxing history, beginning a streak of dominance that would see him unify the heavyweight belts, defending them successfully 23 times in his career and even getting his own video game, “Mike Tyson’s Punch-Out!” in 1987. Tyson was unseated from his title by Buster Douglas on Feb. 11, 1990, a fight in which Tyson was a 42-1 favorite.

In March 1992, Tyson was convicted of rape after a one-year trial and sentenced to six years in prison. He served three years before getting an early release and returning to boxing, scoring big purses for fights with Lennox Lewis and Evander Holyfield but failing to achieve the success of his career before prison. Mike Tyson’s record as a professional boxer was 50-6 with a staggering 44 wins by knockout. 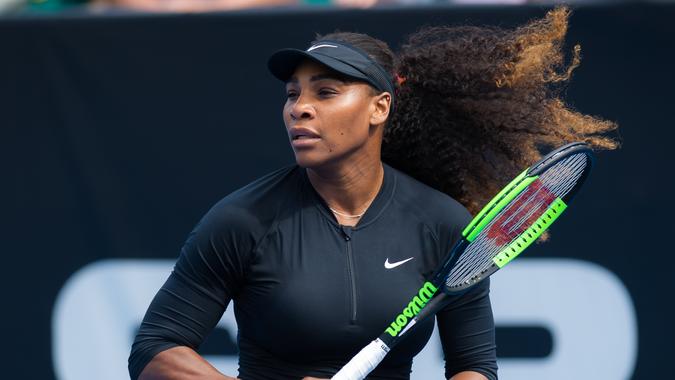 Serena Williams Net Worth: Tennis, Business Deals and ‘Being

The tennis superstar amassed a fortune on and off the court.

> Net Worth > Sports > Mike Tyson Net Worth: His Financial Comeback From Bankruptcy