If it seems like you’re spending more time stuck in traffic — you might be. In the top 20 most traffic-congested cities in the U.S., only Phoenix drivers spent less time in traffic in 2016 than they did in 2015, according to a study by traffic data company, INRIX.

Californians have it the worst. Los Angeles has the No. 1 worst traffic in the world, with San Francisco following close behind at No. 4. Los Angeles drivers spend more than 104 hours annually stuck in traffic, but New York City (89 hours), Atlanta (71 hours) and Miami (65 hours) are some of the nation’s worst cities for traffic, too.

Sitting in traffic is aggravating and inconvenient, but it also takes a toll on your wallet beyond the price of gas. Traffic congestion pulled more than $295 billion out of consumers’ wallets in 2016, in both direct and indirect costs, according to INRIX. The cost of traffic congestion picked LA drivers’ pockets to the tune of $2,400 per individual and $9.6 billion to the city. Check out how much your daily traffic-logged commute is really costing you. 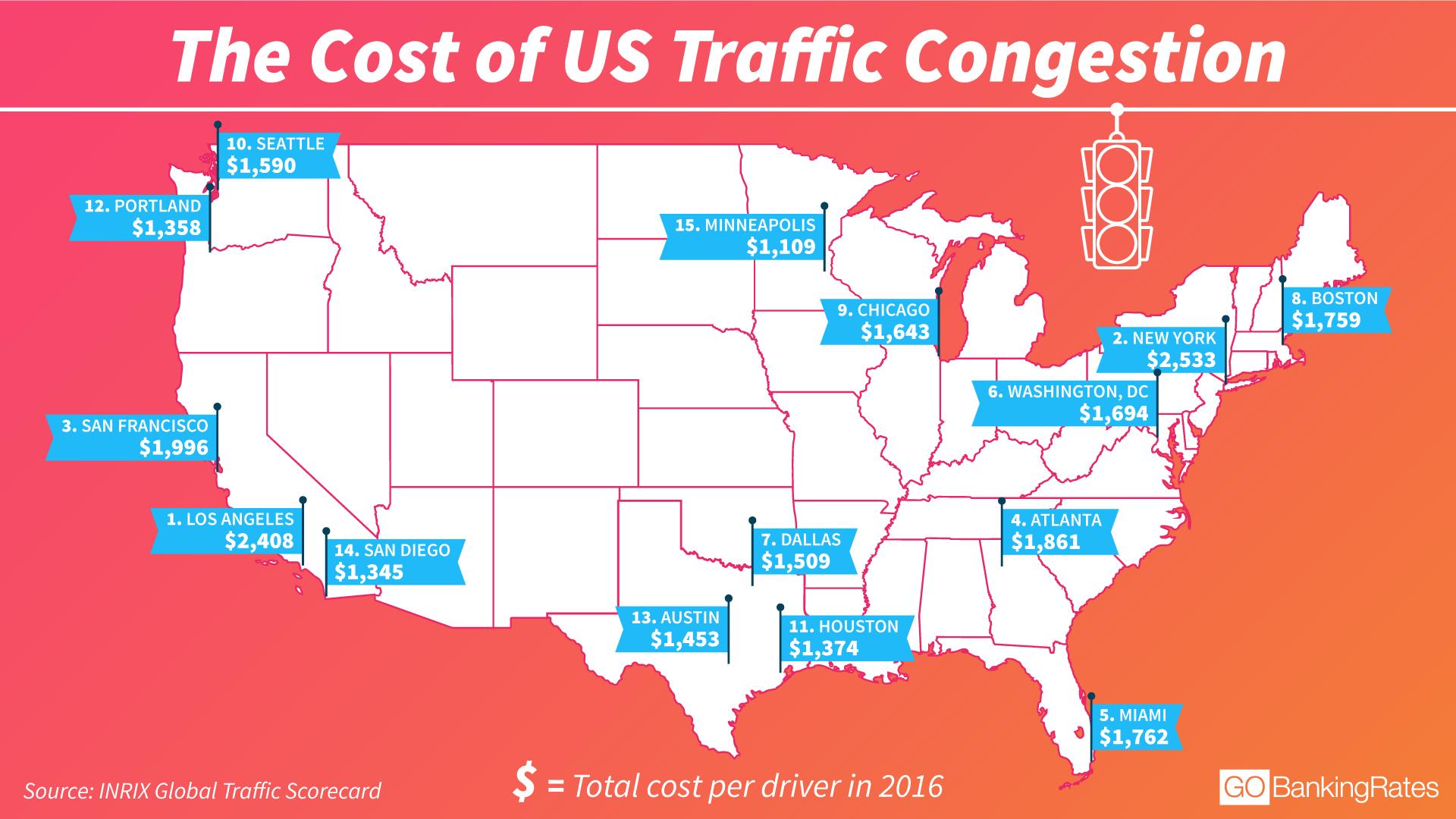 The Toll on Your Car

The U.S. average gas price, at $2.25 per gallon, is just a fraction of the cost of traffic. Each hour you wait in traffic uses up to 0.84 gallons of gas if you drive a pickup truck or large SUV. Small cars like the Ford Focus use as little as 0.16 gallons per hour to idle, while larger cars like Ford Crown Victorias use 0.39 gallons, according to the U.S. Department of Energy’s Argonne National Laboratory.

Lurching along in traffic also damages your engine and other vehicle parts, costing you at the repair shop. Brake pads that last 50,000 miles in flowing traffic conditions might last only half as many miles in heavy traffic before wearing out, requiring a $150-per-axle brake job.

Furthermore, an engine’s ventilation system isn’t designed to idle for a lengthy period of time. Your engine can overheat, and inefficiently burned fuel results in engine deposits that clog injectors and other engine parts, eventually wearing out your engine.

Preventive measures can extend the life of your engine, but they cost money, too. Getting frequent oil changes (average $46), using fuel injector cleaner every 3,000 miles ($4.50 for 10.5 ounces) and adding an annual complete fuel system treatment ($29 for 16 ounces) will extend your engine’s life and help you save money on car maintenance in the long run.

The Toll on Your Health

That chronic tickle in your throat could be telling you something. Regular exposure to exhaust can cause respiratory and lung problems, as well as irritate allergies and trigger asthma. The World Health Organization has also associated it with a higher risk of cardiovascular disease, adverse birth outcomes, cancer and increased death rates.

Doctor’s office visits for illness range from $130 to $180, and a trip to the ER for an asthma or heart attack averages $580 to $700 in basic charges, according to Blue Cross and Blue Shield. Add on around $100 each for pulmonary studies, routine electrocardiograms and other basic tests, and upwards of $200 for allergy studies, ultrasonic electrocardiograms and other advanced testing.

Car climate control systems remove large particulate pollutants, but small particulates flow freely through air filters and the body’s defenses against dust. The micro-pollutants deliver a toxic cocktail of heavy metals, carbon compounds, sulfurs and carcinogens to your body, according to the WHO. Pollution is up to 29 percent higher at intersections and other slow-moving areas, where cars idle and rev their engines as they stop and go, according to a University of Surrey study.

If you find yourself in stop-and-go traffic, roll up your windows and, if weather permits, turn off the fan or opt to recycle the air inside the car to reduce your exposure by as much as 76 percent, according to Medical News Today.

The Toll on Your Mental State

You don’t need a study to tell you that sitting in traffic causes stress, frustration and even anger. All that stress comes with a cost.

In Los Angeles, a study by Louisiana State University connected times when traffic was at its worst with a 6 percent rise in domestic violence. The study estimates a cost of $5 to $10 million in damages each year directly related to domestic violence spurred by traffic gridlock.

Although most people don’t commit crimes as a result of increased traffic, it doesn’t mean they’re immune to its effects. Traffic pollutants can build up in your brain over time, contributing to memory loss and problems with reasoning, according to Metropia, a data analytics firm.

The health of you and your car aren’t the only costs. The time you spend sitting in the car could be better spent doing other things, whether it’s working, shopping or just getting on down the road. INRIX estimated the hourly cost of your time as being worth $25.19 if you would be working, $12.81 during commute time and $9.51 for leisure activities. That means a Los Angeles driver stuck in traffic on the way to work for 104 hours per year loses the equivalent of $1,332 annually.

Don’t Miss: How to Save Money With These 5 Car-Buying Incentives

The Cost to the Environment

Braking and accelerating our way to the office and back every day takes a toll on the environment, too. Wildlife living in urban parks or along congested freeways spend their days breathing in particulates that contribute to shortened lifespans, reproductive failure and a host of diseases.

Toxic pollutants that break down slowly settle in water sources, soil and plant matter that provides their diet. Toxins biomagnify as animals higher up in the food chain consume invertebrates or other creatures whose tissues harbor the toxins. Water evaporates, then returns to the earth as acid rain that damages, trees, soil and water bodies, according to the Massachusetts Department of Environmental Protection.

A study by the University of California Davis estimated that motor vehicle air pollution causes up to $2 billion to $4 billion in crop damage annually in the U.S. To help reduce the impact, you can buy an electric car or hybrid to stem the flow of emissions into the environment when idling.

The Cost to Taxpayers

Gas taxes and other fees paid by car owners cover less than half of the cost of road maintenance, let alone the cost of building new roads. The rest of the bill gets passed onto taxpayers, taking another $1,100 per household each year in property taxes and other general local taxes, according to U.S. PIRG.

The pavement on one in every five miles of highway is in poor repair, and you’ll encounter congestion on two out of every five miles of urban interstate, according to the American Society of Civil Engineers’ Infrastructure Report Card. Nearly $836 billion of needed repairs on U.S. roads is on hold due to lack of funding, the ASCE reported.

There’s an upside to paying taxes to fund road repairs, however. Each dollar spent on road improvements returns more than five times that amount in decreased vehicle costs and lower emissions, thanks to better traffic flow, according to the Federal Highway Administration.

Phoenix was the only city among the top 20 most traffic-clogged U.S. cities to decrease congestion from prior years, according to the INRIX study. So what are they doing right? The city’s ever-expanding light rail system takes some of the credit.

An Arizona State University study also credits Uber and other ride-sharing services that have become popular in the valley. Ride-sharing companies reduce the number of cars on the road, and surge pricing encourages people to avoid rush hour, according to the study. Ride-sharing also led to fewer alcohol-related motor-vehicle homicides.

The city has aimed to harmonize its traffic flow using high-occupancy vehicle lanes and an intelligent transportation system that gives traffic notifications on overhead signs, Phoenix Business Journal reported. The city also plans to improve its traffic-heavy network of interstates running through the heart of the city, and it might add toll lanes so drivers can pay to ditch stop-and-go traffic.

Up Next: 30 Ways to Slash Your Car Costs 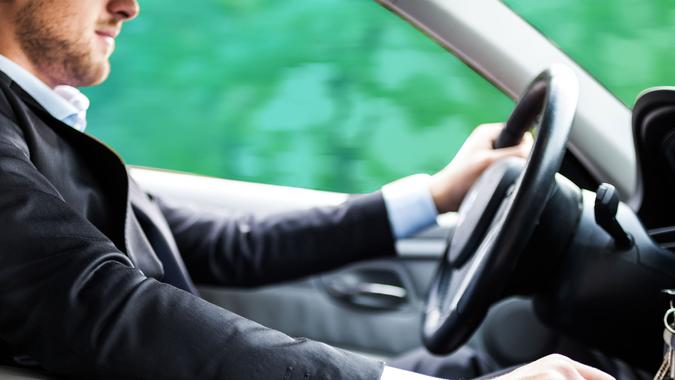 8 Perks That Come With the Best Car Lease Deals

Find out what to look for in a car lease deal. Consider all the perks before you sign a lease.