The increasing cost of prescription drugs continues to burden middle-class Americans, particularly the elderly. Spending per capita on drugs has now reached $1,443 in the United States — more than any other country in the developed world. Moreover, these costs tend to rise as individuals age, often to levels that many cannot afford.

Older Americans take an average of 4.5 medications per month, according to the AARP Public Policy Institute. This could average more than $30,000 per year for seniors who take brand-name drugs, significantly exceeding the $17,532 average benefit for Social Security. Although these costs might be tax-deductible in some cases, they can bust the budget of a retiree and could delay or even deter those in the workforce from retiring.

With the survival of the middle class possibly threatened, politicians from both parties have spoken out and proposed bills to address this issue. This guide will provide some background on increasing drug costs as well as possible approaches.

When the government introduced Medicare in 1965, prescription drugs were considered inexpensive. Hence, Medicare at that time included no provision for the cost of drugs. Beginning in the late 1990s, prescription drug spending began a rapid increase. As the number of drug approvals reached an all-time high, sales of these high-cost medications surged.

Spending on drugs increased 9.9% per year between 1997 and 2007, which reportedly tripled real expenditures during that period, according to Health Affairs. Although drug price growth plateaued for a time after that, costs surged in 2013.

By 2015, per capita pharmaceutical spending exceeded $1,000 in the United States, and it reached $1,220 by 2018. That comes in well ahead of the next biggest spender, Switzerland, with $963 per capita. And the United States spends twice as much as the Slovak Republic, where per capita expenses average $577.

AARP found cost issues with higher-priced specialty drugs and generics that rise faster than the rate of inflation, said Leigh Purvis, the organization’s director of health services research. “Current prescription drug price trends are simply not sustainable,” Purvis said when she testified before Congress in August 2018.

Here’s a look at the rising costs of prescription drugs over the years:

Check Out: Best and Worst States for Health Insurance Costs

Why Do Prescription Drug Costs Continue To Rise?

A “scientific explosion” in the 1970s and 1980s set the stage for advances in drug development, according to Harvard professor Aaron Kesselheim. In the 1990s, this eventually led to the creation of high-cost hypertensive and cancer drugs. With no price controls and high demand for these therapeutic treatments, sales surged.

Other factors came into play. The late 1990s saw a record number of drug approvals and increased spending on advertising to both doctors and consumers. Government programs to help pay for these drugs further fueled rising prescription drug prices. The 1990s and early 2000s saw expansion in Medicaid and CHIP spending. The government implemented Medicare Part D in 2006 to help Medicare recipients pay for their medications.

Beginning in 2007, spending growth slowed down, fewer drugs received approval and more patents began to expire, paving the way for lower-cost generics. But another run-up in spending began in 2014 as the FDA again increased drug approvals. Spending also increased due to the Affordable Care Act.

Researchers at the Scripps Research Translational Institute see no end in sight to this trend. They believe the costs of brand-name drugs will double every seven or eight years without Congressional action.

Who Is Affected Most By Rising Prices?

Everyone feels the effects of higher insurance costs, government expenditures and direct spending on pharmaceuticals, including patients and hospitals. Increasing drug costs and shortages of critical medications have exacerbated the problem. More than 80% of hospitals reported that shortages led to increased spending on drugs, and more than 90% of hospitals sought less expensive alternatives, according to a report by the American Hospital Association, the Federation of American Hospitals and the American Society of Health-System Pharmacists. About 25% of facilities had to cut staff due to the rising costs for these pharmaceuticals.

Which Demographic Feels It the Most and Why?

As people age, their prescription drug use tends to increase. Hence, in most cases, the elderly feel most of the effects. Costs vary by state, but thanks to Medicare Part D, most Medicare recipients receive some degree of help in paying for prescriptions. But for the heaviest users of brand drugs, expenses can still run into the thousands of dollars because Part D offers no cap on maximum spending.

Related: Most and Least Expensive States for Retiree Healthcare Costs

Most of the major presidential candidates on both sides of the aisle have put forth proposals to reduce the cost of prescription drugs. Solutions have varied from bringing the government directly into the prescription business to allowing imports of medicines from countries where costs are lower. As drug prices continue to squeeze the middle class, this issue could heavily influence the outcome of the election.

Where the Candidates Stand

Given the financial burden prescription drug costs have imposed on millions of Americans, most candidates have spoken out on the issue.

Former Vice President Joe Biden has vowed to put an end to what he calls “runaway prescription drug prices” and “profiteering” by the industry. Sen. Elizabeth Warren and Sen. Kamala Harris have decried the financial burden that has crushed families and caused patients to skip their required doses. Sen. Amy Klobuchar, Rep. Beto O’Rourke and Sen. Bernie Sanders have criticized the inability to import drugs from abroad or allow Medicare to negotiate drug prices.

Interestingly, President Trump has stated many of these same things. During the 2016 campaign, he departed from Republican orthodoxy by endorsing drug re-importation. He even claimed Medicare could save $300 billion per year if it were allowed to negotiate prescription drug prices.

What Plans Have They Proposed?

Trump claims that under his watch, the FDA has approved “the most generic drugs in history.” And during the summer, the Department of Health and Human Services proposed a drug importation plan.

But more than 2.5 years into Trump’s administration, neither drug importation nor Medicare negotiations of prescription drug prices have become a reality. Not surprisingly, most of the Democratic candidates continue to propose these measures, although plans vary somewhat between candidates.

Biden would limit prices on new drugs and index the price increases to inflation. He also wants to eliminate the tax break on ad spending that benefits pharma companies. Also, Biden would work to ensure an ample supply of generics immediately after patents expire.

Warren’s plan takes Biden’s idea one step further. She proposes what she calls the Affordable Drug Manufacturing Act. Under this plan, the government would actively manufacture a drug if it determined that a shortage existed.

Not to be outdone, Sanders has proposed a few bills of his own to accomplish many of these goals. He aims to achieve drug importation and Medicare price negotiation through specific proposals. Sanders also plans to limit prices through the Prescription Drug Price Relief Act, which would peg maximum prescription drug prices to the median price for particular drugs in five other industrialized countries.

Harris also proposes aggressive action against high prescription drug prices. She would tax profits from “aggressive” drug prices at 100% and return that money to consumers. Harris would also give Congress 100 days to act against high drug pricing. If Congress does not cooperate, she will conduct investigations on her own and lower drug prices through executive action.

Beto O’ Rourke has a different idea on patents. In the event a manufacturer refused to set what the government deems a “reasonable” price, O’Rourke would compensate the company for research costs and give the patent to a different company. Additionally, his Medicare plan would cover all out-of-pocket expenses for prescription drugs.

Who Foots the Bill?

Americans spent $333 billion on prescription drugs in 2017, according to the Center for Medicaid and Medicare Services. Taxpayers covered much of it. Medicare amounted to $101 billion, or 30% of this spending, with Medicaid picking up an additional 10%, or $33 billion, of the tab. Private insurance was the single largest payer, representing 42% — $140 billion — of all prescription drug spending. Consumers paid 14%, which amounted to $47 billion. Other payers covered the remainder of the tab.

The costs continue to increase. The Centers for Medicare and Medicaid Services estimates drug spending went up to $344.5 billion in 2018 and will cost $360.3 billion in 2019.

See: Why Prescription Drug Prices Are Rising — and How You Can Save

Looking Ahead on the Rising Costs of Prescription Drugs

Despite the intense political focus on this issue, costs for families continue to rise. The implications reach far beyond direct expenses. The $144 billion that the government spends on drugs means either higher taxes or more borrowing by the Treasury, which could limit government services in the long-term. There are also employment costs when companies provide insurance for employees and their families using money that employees would likely receive in direct pay were it not for high prescription drug costs.

Not addressing this issue could mean ever-higher costs that could force families to curtail other types of spending. Patients might have to find lower-cost alternative treatments, or in extreme cases, possibly do without drug therapy altogether.

Alternatively, some of the plans proposed could provide many of these drugs at a lower cost, thus enabling people to live healthier lives and freeing up money in a family’s budget for other priorities. 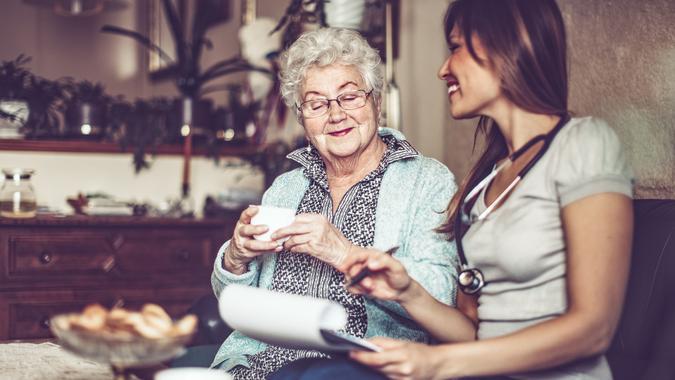 The Medicare Scam That Stole Over $1 Billion From Our Pockets

Protect your loved ones from billion-dollar scam operations.