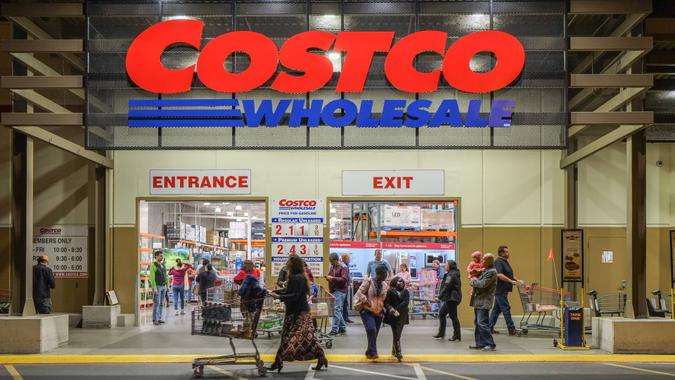 Warehouse clubs such as Costco are known for offering low prices on a wide variety of products. However, you have to pay an annual membership fee of $60 to $120 to have access to Costco’s value-priced products. Or do you?

SNAP Schedule 2022: May Payments
Save More: 6 Bad Habits That Hike Up Your Grocery Bill

There are several ways you can take advantage of Costco’s deals without a membership. That said, the membership does have its perks. And the warehouse club will refund your membership fee if you’re not satisfied.

But if you want to find out what all the hype about Costco is, you can use these hacks to score some of their best deals and decide whether you want to spring for a membership.

Shop With a Member

Unlike Sam’s Club, Costco doesn’t offer a day pass to let you check out the club before joining. However, you can always shop with a member, said Jim Wang, founder of WalletHacks.

Your friend will need to use his membership card at checkout, but you can split up the transaction and pay for your purchase so your friend isn’t stuck paying for your items, Wang said.

“I’ve done it multiple times to separate business and personal expenses since I use different cards,” he said. Be aware, though, that the only credit card Costco accepts is Visa.

Use a Costco Shop Card

You can also shop Costco without a membership if a member buys you a Costco gift card. It can be used to buy all items in the warehouse, said Kyle James, founder of Rather-Be-Shopping. The gift card — called a Costco Shop Card — can be bought in denominations from $25 to $2,000.

If your purchase exceeds the Shop Card value, no worries. “That’s because Costco accepts partial payment from a gift card and the remainder of payment from an accepted method, including cash or a Visa debit or credit card,” said Kendal Perez, a former savings expert with Coupon Sherpa.

Be aware that you’ll likely be able to use this hack only a couple of times. A Costco customer service representative said that non-members could be flagged for taking advantage of Shop Cards to regularly shop at the warehouse club.

Another way to shop at Costco without a membership is to take advantage of its website.

“All non-members can shop on Costco.com,” James said. “But be aware that if you’re not a current member, you’ll be hit with a 5 percent surcharge.”

If you plan to buy something that costs more than $1,100, you’re better off getting the $60 basic membership than paying the surcharge. “Otherwise, you’re losing money on the whole deal,” said James.

Also, some items sold on Costco.com are available to members only — and are marked as such. So not every deal online will be available to you.

Costco is known for its quality wine sold at great prices. In fact, it’s one of Costco’s best deals. You don’t necessarily have to be a member to buy wine, beer or other spirits at this warehouse club.

A handful of states — such as California — have laws that prohibit establishments from requiring a membership to purchase alcohol, James said. Call your local Costco to see if you can buy alcohol without a membership. If you can, you might be required to make alcohol purchases at the membership desk rather than the checkout, a Costco customer service representative said.

“Costco offers flu shots and other immunizations throughout the year to members and non-members,” Perez said. And no appointment is necessary. You just have to fill out a consent form.

Have Your Eyes Checked

Most Costco locations have an independent optometrist in, or near, the warehouse. You can schedule an appointment to have your eyes checked without a Costco membership, James said.

“But you’ll need a membership or gift card to buy contacts and glasses,” he said. Call to compare prices with other optometrists in your area to see if the one at Costco is the best option.

According to Costco, membership is not required for pharmacy purchases. Costco often offers competitive prices on prescription drugs, Perez said.

“Tell the greeter that you’re picking up a prescription, and they’ll let you through,” Perez said about the strategy you should use to get in the door without a membership card.

However, a Costco membership might pay for itself if you regularly get prescription drugs. Members can get lower prices on medications by joining the Costco Member Prescription Program. The discount is determined at time of purchase but can be as much as 40 percent.

Eat at the Food Court

You can get an inexpensive meal at the Costco food court without being a member. One of Costco’s great food court deals includes a hot dog and 20-ounce soda for $1.50, James said.

You can fill up at Costco’s fuel centers if you pay with a Costco Cash Card. So if you have a friend who is willing to buy the warehouse club’s gift cards for you, you can take advantage of Costco’s low-priced gas. “It’s much cheaper than other gas stations,” Wang said. Costco’s gas prices are usually 20 cents a gallon less than the national average.