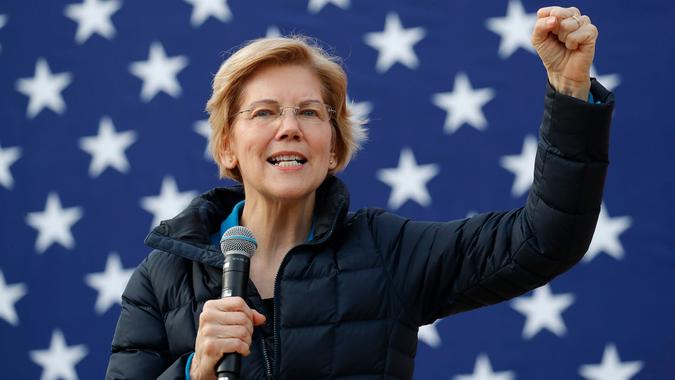 “The ultra-rich and powerful have rigged the rules in their favor so much that the top 0.1% pay a lower effective tax rate than the bottom 99%, and billionaire wealth is 40% higher than before the COVID crisis began. A wealth tax is popular among voters on both sides for good reason: because they understand the system is rigged to benefit the wealthy and large corporations,” Warren said in a statement.

“As Congress develops additional plans to help our economy, the wealth tax should be at the top of the list to help pay for these plans because of the huge amounts of revenue it would generate. This is money that should be invested in child care and early education, K-12, infrastructure, all of which are priorities of President Biden and Democrats in Congress. I’m confident lawmakers will catch up to the overwhelming majority of Americans who are demanding more fairness, more change, and who believe it’s time for a wealth tax,” Warren said.

See: Billionaires vs. the Middle Class Across America – Who Pays More in Taxes?
Find: 23 Celebrities Convicted of Tax Evasion

“The Ultra-Millionaire Tax Act would level the playing field and narrow the racial wealth gap by asking the wealthiest 100,000 households in America, or the top 0.05%, to pay their fair share,” according to the statement.

The bill’s sponsors say the tax would bring in at least $3 trillion in revenue over 10 years, without raising taxes on the 99.95% of American households that have net worth below $50 million, according to a 2021 analysis from economists Emmanuel Saez and Gabriel Zucman from the University of California-Berkeley.

“As working families struggle to put food on the table, keep the heat on, and pay the rent during this devastating economic crisis that has caused the poverty rate to jump by the largest amount in at least 60 years, the rich have only gotten richer and the wealth of billionaires has jumped by 40%,” Congresswoman Jayapal said in the statement.

In addition, the bill includes anti-evasion and avoidance measures.

These measures include a $100 billion investment to rebuild and strengthen the IRS, ensuring the agency has the resources to hire and train additional personnel, modernize IT systems and implement the new asset valuation, reporting, and enforcement requirements for the Ultra-Millionaire Tax. It also includes a 30% minimum audit rate for taxpayers subject to the Ultra-Millionaire Tax, as well as a 40% “exit tax” on the net worth above $50 million of any U.S. citizen who renounces their citizenship in order to escape paying their fair share in taxes

“Wealth at the top has boomed during the COVID crisis. Billionaires’ wealth has literally exploded while many Americans struggle with job and income loss. The ultra-millionaire wealth tax is the most direct and powerful tool to curb growing wealth concentration in the U.S. and make sure the ultra-wealthy pay their fair share in taxes. It will also bring substantial and much needed tax revenue to address the many challenges the country is facing,” Saez and Zucman said in a statement.