How Far Could Bitcoin Fall After Stock Drops by Nearly 10% in One Day’s Time? 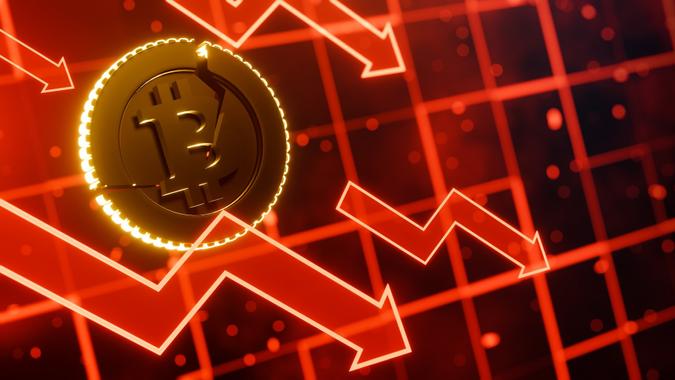 Amid a market bloodbath, cryptos were not spared, and Bitcoin has dropped nearly 10% in the past 24 hours as of the morning of May 6, according to CoinMarketCap.

Cash App Borrow: How To Borrow Money on Cash App
Explore: 22 Side Gigs That Can Make You Richer Than a Full-Time Job

Following a brief market rally after the Fed’s decision to hike rates by half a point, markets reversed violently, continuing to slip further on May 6.

Brock Pierce, Bitcoin Foundation Chairman, told GOBankingRates that the selloff in Bitcoin and other cryptocurrencies has mainly been driven by the technology-led global market selloff. “There are many positive catalysts for Bitcoin, and with the positive steps recently taken by states and countries to move toward a more favorable approach to cryptocurrency, it is only a matter of time until Bitcoin resumes its upward trend,” he added.

Chris Brookins, co-founder and CEO of RociFi, told GOBankingRates that he suspects we are in the beginning stages of a deeper sell-off with Bitcoin and the crypto industry at large. “In short, I don’t think we have bottomed out yet,” he said. “We’re possibly entering a world that crypto has never experienced before — a recession. And the associated macro conditions leading up to this are just primed for the so-called paperhands to sell their crypto, as they have their tech stocks. Bitcoin and Ethereum are struggling, and of course altcoins will likely struggle even more.”

More: 6 Alternative Investments To Consider for Diversification in 2022

Brookins added that if you have a long-term investing horizon, this might be a great time to start scaling into solid crypto assets, as Bitcoin is approaching its year-long low, which it’s unlikely to break again. “So if you are looking to buy and hold, then it’s always good to start scaling in carefully when there’s proverbial blood in the streets,” he added, while also pointing out the relative strength of Ethereum in this market — which is down about the same percentage-wise as Bitcoin, but well above its yearly low. This, he said, “goes to show that Ethereum might be gaining ground on Bitcoin for overall dominance of the market. Additionally, other aspects of the crypto market are still active, like NFTs and various DeFi protocols.”

Ether was down 5.3% in the past 24 hours, as of mid-morning May 6, and altcoins were largely down as well, according to CoinMarketCap.

Russell Starr, CEO of DeFi Technologies, told GOBankingRates that with macro conditions as bad as they have been, it is impressive that markets have held on for as long as they have. “It’s hard to predict exactly where such a sell-off will stop, but it’s not unreasonable to think that Bitcoin will fall to the $33,000 lows it hit in January,” he stated. “Between rising interest rates, high inflation and the looming possibility of a recession, the price is largely being held up by hope at this point,” he said.

See: What is NEAR (NEAR) Protocol Crypto? Should You Buy Now?
Crypto Coin vs. Token: What’s the Difference?

He nuanced his view, however, saying that the crypto ecosystem “is so much more than the price of Bitcoin these days.”

“It’s not truly time to panic until we start to see the other systems get abandoned, such as the DeFi protocols and the NFT marketplaces. As long as those are still seeing use, the crypto ecosystem will continue to grow, despite prices being down,” he added. “I’m very confident that the prices of Bitcoin and Ethereum won’t stay this low forever, but if you want to make a profit at an exponential scale, DeFi, for example, could be a good place to look here. There are a number of protocols that are seeing prices drop also, which means now might be a decent time to invest.”