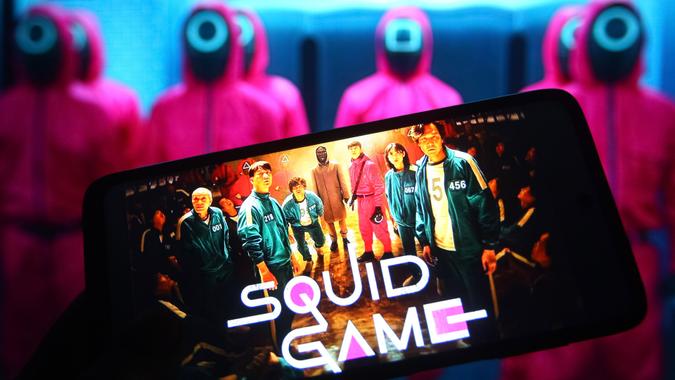 “Squid Game,” the Korean blockbuster Netflix series, where “hundreds of cash-strapped players accept a strange invitation to compete in children’s games,” has inspired a new crypto, and it’s replicating the same cult following. The Squid Game crypto, SQUID was worth one cent on Tuesday — but in the space of three days, it has surged 33,600% to hit $3.37, according to CoinMarketCap.

Today, SQUID was up 250% mid-morning, at $7.66. It is important to note, however, that CoinMarketCap has issued a warning on its website, saying “we have received multiple reports that the users are not able to sell this token in [exchange] Pancakeswap. Please exercise caution while trading.”

According to its website, the coin is only listed on PancakeSwap.

“We have some offers from centralized exchanges which will be disclosed as we are near to listing on these exchanges,” according to the website.

According to its whitepaper, SQUID also intends to launch an NFT marketplace, saying “We have many cool ideas for SQUIDGAMECRYPTO NFTs.”

The presale of SQUID started on Oct. 20 and it “sold out in 1 second,” according to the whitepaper. SQUID is the only token that can be used in Squid Game, a crypto play-to-earn platform inspired by the series. The online tournament starts in November.

After learning about the Squid Game crypto going up 40,000% in the first week I’ve decided to play in the next Squid Game.
— Ramp Capital (@RampCapitalLLC) October 29, 2021

“There is no longer dystopian world where a mysterious organisation gathers people who are in large amounts of debt and ‘living on the edge.’ Rather than 456 players drawn from different walks of life but each deeply in debt chosen intentionally by the organizers in the drama, everyone here in crypto world can participate in the Squid Game with SQUID token or related NFTs in our marketplace. Compared to $38.5 million bonus for the last winner, we crypto Squid Game will not limit the maximum of the final bonus as well as the numbers of participates. The more people join, the larger reward pool will be. More importantly, we do not provide deadly consequences apparently! Your experience will only reflect on the joy of winning rewards and sorrow of losing money when the game failed,” the whitepaper states.

See: NFT Art: What It Is and Where To Buy
Find: GameStop NFT Marketplace Rumors Swirl — What It Means for the Future of the Meme Stock

In the U.S., “Squid Game” is the first Korean series on Netflix to reach the number one spot, according to Newsweek. The series has also taken the social media world by storm, with the hashtag #squidgame amassing an impressive 37.2 billion views on TikTok alone.