John Deere Stock: Is It a Good Buy? 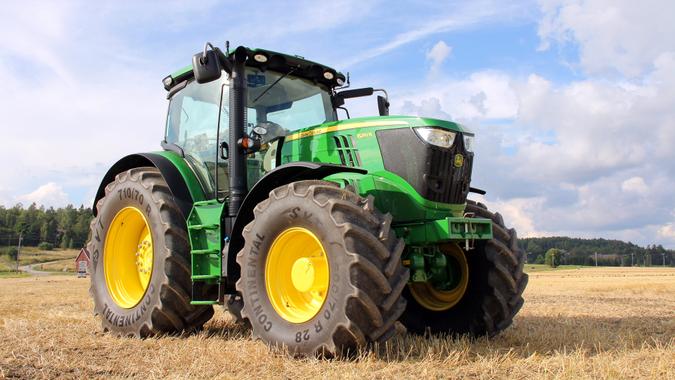 With the Biden administration focused on American infrastructure and job growth, and market activity in flux in the face of ongoing inflation, many investors are looking for new places to stash their cash.

One investment that has been looking like an attractive bet lately is Deere & Co., the manufacturing company known for its agricultural equipment, such as tractors. The company’s stock, DE, even made the news surrounding the divorce of Bill and Melinda Gates.

Cascade Investment, the investment company established by Bill Gates, transferred approximately 2.25 million shares to Melinda Gates, totaling around $851 million in worth, last May. The transfer caught attention since it comprised a large chunk of the $3 billion or so that Melinda Gates is believed to have received to date.

Here’s a look at Deere as it reports its fourth-quarter earnings to give you the information you need to know before investing in the company.

A Stable Foundation in Place

In the commercial farming sector, Deere benefits from the longtime strength of its brand, as well as a current wave of reorders that were anticipated but, until recently, weren’t guaranteed.

In the private sector, the company appears to be experiencing increased demand for compact tractors and turf equipment. Consumers are likely prioritizing home and lawn projects with the extra time at home they have during the coronavirus pandemic.

A Company Investing In Itself

Deere is gaining attention for multiple pivots forward — decisions that could expand the company’s consumer base and increase prices and margins. Many industry analysts like Deere’s commitment to modernizing agriculture — and the company has been working on several developments.

Deere & Co. has been investing in smart farming solutions, such as technology that offers farmers real-time data points to use to make decisions about when to prepare soil, plant and nurture seeds and harvest plants. Deere also purchased Harvest Profit, a software with a focus on farm profitability.

The company has invested in precision agriculture — giving farmers the ability to manage drought risk using information from satellites. This not only helps protect farms against potential losses, but also carries the possibility of using drought-prone crops of land, such as grasslands and pasture.

Using these more precarious types of land for farming with the help of satellite guidance could increase yields, profits and equipment needs. That’s potentially good news for Deere and its investors.

In 2004, Deere & Co. entered into a partnership with NASA’s Jet Propulsion Laboratory with the goal of improving its self-driving tractors. Deere used NASA’s technology to advance the self-guidance ability of its tractors, but it continued to work on its own technology.

Although it now relies on its own system, Deere placed a strategic bet by partnering with NASA until it could reach full proficiency with self-driving tractors on its own.

As GOBankingRates reported last month, 10,000 Deere employees — members of the United Auto Workers Union — went on strike in October “for the ability to earn a decent living, retire with dignity and establish fair work rules.” The union approved a six-year contract on Nov. 17, ending the strike.

As Deere adds smart farming technology to its equipment and overall product mix, both sales and profit margins are on the rise. Software sales are becoming a regular component of equipment sales and could become a stand-alone order.

An Expanding Customer Base

Deere’s opportunity in international markets is perhaps stronger than at any point in its history. As U.S. farms test the ways in which predictive technology can reduce farm labor and minimize losses, agricultural professionals from all over the world are likely to seek the same opportunity.

Deere & Co. stock has a one-year high of $400.34 and a one-year low of $250.54. That’s quite a price swing, but over the last four quarters, the company has surprised investors with robust quarterly earnings.

Deere’s senior vice president and CFO, Ryan Campbell, commented during a recent earnings call that the company’s underlying fundamentals have been improving, pointing to elevated commodity prices and increased market access. In the third quarter, worldwide net sales and revenues, driven by essentially all products categories, according to the company’s press release, were up 29% for the quarter and 27% for nine months. At that time, Deere forecasted full-year net income in a range of $5.7 billion to $5.9 billion for the fourth quarter of 2021.

In fact, Deere beat its own estimates and those of analysts, netting $5.963 billion. Quarterly revenue and profits also exceeded expectations despite supply-chain issues and the strike, the latter of which analysts say demonstrated the influence of labor in this tight labor market, CNN reported.

In its guidance for 2022, Deere said it anticipates net income in the range of $6.5 billion to $7 billion, with favorable crop prices, economic growth and increased investment in infrastructure expected to contribute to positive fundamentals.

Is Deere Stock a Buy, Sell or Hold?

The consensus among analysts polled by Yahoo Finance and by Zacks Investment Research is that Deere & Co. stock is a hold. The Zacks “hold” rating means Zacks expects the stock to see a 10.62% annualized return in the next one to three months.

Investors Should Be Ready for Uncertainty as the Pandemic Winds Down

Although multiple factors will influence Deere’s performance in its new fiscal year, the company did enjoy the pandemic-era benefit of increased interest in compact equipment as Americans made landscaping more of a priority during lockdown.

Despite fourth-quarter earnings delivering more than expected, it’s unclear whether or not the company can hold on to the profitability it saw during the pandemic.

At one point during the coronavirus pandemic, Deere stock had fallen more than 40%. However, the company’s solid quarter-to-quarter performance, paired with anticipation around President Biden’s infrastructure plan, which he signed into law earlier in November, appear to have offered Deere some shelter.

The company appears positioned for growth due to the infiltration of technology into its product lines and the likely appeal of technology to farmers in other parts of the world. However, investors will need to watch and see if Deere’s growth tactics are enough in the short term to meet those trajectories head-on at this moment.

Deere isn’t likely to go anywhere. The question is simply this: How soon can it get to where it’s going, and how much of the market’s confidence can it keep in the meantime?