Marijuana Stocks That Will Light Up Your 420 Portfolio 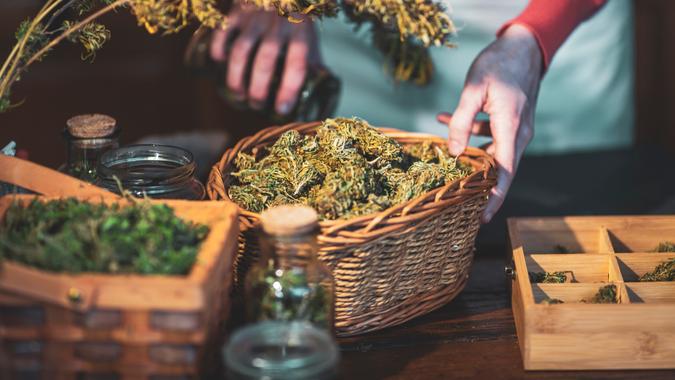 The marijuana sector is lighting up — and not just on 4/20. With New Jersey starting legal sales on April 21, New York recently licensing 52 suppliers to begin growing products on farms, a push for federal legalization, and Benzinga holding a Cannabis Conference on April 20-21, investor sentiment around marijuana stocks is rising.

Legal cannabis sales totaled $20 billion in 2020 and are projected to reach $40.5 billion by 2025. Emily Flippen, a Motley Fool analyst, told GOBankingRates that cannabis stock performance has historically been heavily driven by the sentiment of retail investors.

“This has led to a boom-bust cycle that tends to pump up cannabis businesses when positive news is on the horizon while also causing underperformance when excitement wanes,” Flippen said.

She added that in the U.S., retail investor sentiment is often driven by changes (or lack thereof) in federal policies on cannabis regulations.

“Despite falling stock prices, many U.S.-based cannabis businesses are actually recording record levels of profitability and growth, even in the face of burdensome tax policies. Investors looking to gain exposure to the cannabis industry should invest in businesses that are producing sizeable and growing positive operating and free cash flows while avoiding names that garner some of the highest levels of hype due to abstract deals, dilutive M&A activities, or high levels of speculation by short-term traders.”

Beau Whitney, founder of Whitney Economics cannabis consulting data analytics and economic research, noted that investors should look for companies that do their own growing and are based in states that don’t add to overhead costs.

“Retail investors should invest in stocks where companies have full vertical operation from cultivation to retail etc. and are positioned in states where there are fewer licenses. The more licenses the more revenue you have to share with others.”

But don’t get too excited if stock prices spike today. Whitney warns, “It’s 420, the Christmas of cannabis, and these MSOs will see a huge spike in sales as it’s the largest sales day in the year.”

So what stocks are worth watching?

Green Thumb Industries, which owns retail cannabis stores in 12 states across the U.S. and operates 13 manufacturing facilities, is a stock investors should watch.

“With the legal recreational marijuana market in Illinois opening for business at the beginning of 2020, this company is benefiting from tremendous growth in its home state. Along with the opportunity to expand into additional states such as New York and New Jersey, the company has significant growth potential,” the Motley Fool says.

Greenlane Holdings, which develops and distributes cannabis accessories, child-resistant packaging and vape solutions, is one to watch in volatile markets, according to MarijuanaStocks. The company’s fourth-quarter earnings increased 54% to $56.0 million and their year-over-year revenue saw 20% growth. While the stock has been down, buying the dip will put investors in a position to eventually see a sizable return when marijuana stocks do begin to recover, it adds.

Another stock where investors could buy the dip is Tilray. While the stock has been down, the company reported earnings on April 6, with net revenue increasing 23%, driven by a 32% growth in cannabis revenue to $55 million, according to the earnings release. The company is also diversified, selling hemp-based foods and craft beverages in addition to its cannabis offerings.

Trulieve Cannabis is a cannabis grower and retailer that focuses primarily on the Florida medical marijuana market. The company dominates in the Sunshine State by accounting for nearly 50% of total cannabis sales and has been consistently profitable since 2017 — an achievement few other marijuana companies can claim. Its sales and earnings also continue to soar, according to the Motley Fool.

In addition, the Motley Fool says that Trulieve plans to acquire Harvest Health & Recreation in a deal that will boost its presence in several other states and make it the most profitable multi-state marijuana business in the country.

Experts also note that in addition to “pure” marijuana stocks, there is also a whole microcosm of satellite companies in the sector that are worth watching.

The booming U.S. cannabis industry has created fast-growing demand for hydroponics supplies of which GrowGeneration is an ancillary provider. The company reports it is the largest specialty retail chain focused on the cannabis market, selling hydroponic and organic garden centers in 63 locations across 13 states. In addition to its retail space, they distribute products directly to farms and offer financing on equipment. GrowGeneration’s annual revenues increased 119% to $422.5 million in 2021.

If you’re not looking for a large investment, Sundial Growers is another stock worth watching. At under a dollar a share, “it could be a secret weapon for marijuana investors,” according to InvestorPlace. The company not only grows and sells product but is also invested in banking, providing financing to other cannabis outfits. However, the stock is down 37% and has not reported fourth-quarter earnings, possibly because of its acquisition of liquor retailer Alcanna Inc.

Bryan Fried, Chairman and CEO of Pangea Global Technologies, who is a speaker at the Benzinga Cannabis conference in Miami, told GOBankingRates that legalization continues to fuel the cannabis market growth with both New York and New Jersey set to legalize recreational cannabis in the next few weeks.

“Unlike other consumer product markets plagued by inflationary prices, the challenge for cannabis growers and producers today is maintaining ultra-competitive low prices for end-users while expanding the total number of cultivated products,” Fried said.

What’s Next For the Industry?

Fried noted that as the industry grows, cannabis AgTech — the use of technology for better crop yields and profit margins — and innovative, individually designed lighting applications are critical for lowering operational and energy costs, as well as ensuring brand stability, and will play a much larger role in the market. As the industry continues to mature and lean on better practices, future success will depend on this.