Coke and Home Depot Speak Out Against Georgia’s Voting Restrictions 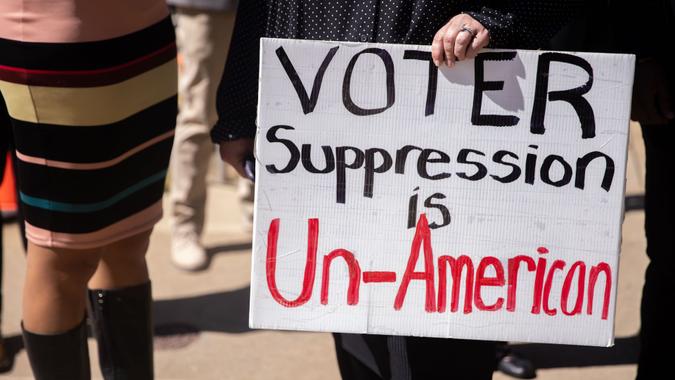 Civil rights and activist groups are dialing up the pressure on corporate heavyweights based in Georgia, including Coca-Cola, Home Depot, Delta Air Lines, UPS, and Aflac — to oppose Republican efforts to restrict voting rights. Both Coca-Cola and Home Depot have spoken out on the issue.

Talk Back: Do You Think the Minimum Wage Should Be $15? Take Our Poll
Find: 22% of Americans Who Lost Their Jobs During the Pandemic Remain Unemployed, Survey Reveals

These new voting restriction bills come after the traditionally Republican state turned blue in the 2020 presidential election, with Black voters playing a key role in this shift, according to Reuters.

Voting and civil rights advocates have been calling upon large corporations based in Georgia who Reuters reported donated $7.4 million to the politicians promoting the new voting restrictions legislation. Activists have been taking out digital ads and full-page ads in local newspapers asking large corporations to oppose these bills and stop their donations, Reuters noted.

Last Friday, the Georgia Chamber of Commerce expressed concerns about the new voting restrictions in a statement that supports “accessible and secure voting while upholding election integrity and transparency.” This statement also notes that Georgia’s voting laws for absentee, early, and day-of-voting were in line with 33 other states in 2020.

Coca-Cola and Home Depot have indicated that their companies are aligned with the Chamber’s statement, but activists are pressuring corporations to do more to show support for Black voters.

See: 5 Exceptional Banks and Credit Unions That Serve Communities of Color
Find: Biden’s American Rescue Plan Will Lower Taxes by an Average of $3,000

Cliff Albright, a Black Voters Matter co-founder told Reuters, “Some of these companies have made beautiful statements for Black Lives Matter. Yet here, in the moment where it matters most, they have been silent.”