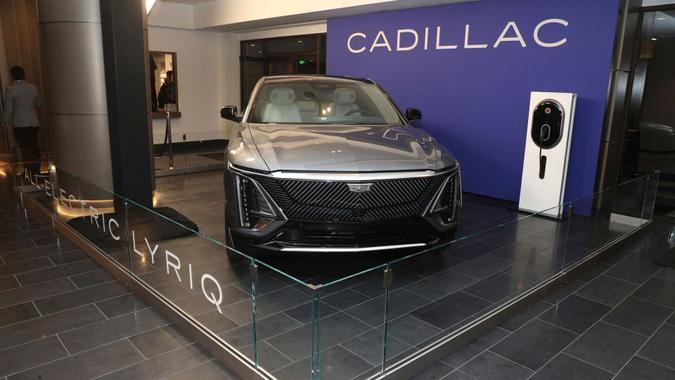 With a starting retail tag of $59,990, the Lyriq is GM’s third electric vehicle, after the compact Chevrolet Bolt and the high-end GMC Hummer, and is one of more than 20 models GM plans on producing in the U.S. in the next three years. By 2035, the company will only be producing electric vehicles.

When the midsize crossover was unveiled in August 2021, GM spoke of it as the “next chapter” and “technology spearhead” for the automaker, who is one of many companies trying to compete with Tesla, the global leader in electric vehicle sales. Lyric is the first model to feature GM’s latest next-generation batteries and EV architecture — features it hopes will rival, if not outperform, Tesla and forthcoming efforts by the other legacy automakers.

“It marks a turning point for the brand, a pivot point for the brand, an opportunity to regain momentum and position the Cadillac brand for its next chapter,” Cadillac President Steve Carlisle told reporters during the unveiling media briefing. “Lyriq really is the cornerstone upon which we are going to build the future.”

The company is no less enthusiastic as production starts, claiming that customer demand will be high for the new model of its iconic Cadillac marque and that it has a waiting list of over 240,000 potential buyers. GM’s Spring Hill plant was remodeled to produce the Lyriq plus three of its popular SUVs, the Cadillac XT5, XT6, and the GMC Acadia. GM president Mark Reuss said that production at Spring Hill could be skewed toward the Lyric if customer demand required.

Dealers will begin taking orders for the anticipated SUV on May 19.