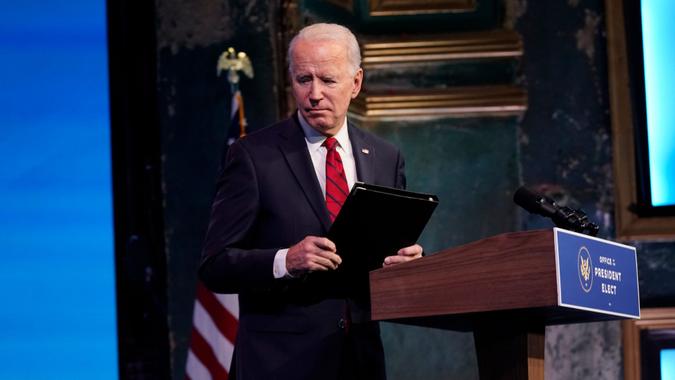 President Biden and Senate Democrats have agreed to tighten income limits for receiving the $1,400-per-person stimulus checks included in the $1.9 trillion American Rescue Plan, according to an Associated Press report.

See: If You Get a Stimulus Check, How Will You Use It? Take Our Poll
Find: $1,400 Stimulus Checks Are Still Coming – But Who’s Eligible to Get One?

“I’m tired of compromising on basic progressive values. We must do everything in our power to give Americans a raise,” Rep. Ro Khanna tweeted after the news broke.

The direct payment of $1,400 per person in Biden’s plan would  supplement the $600 Congress approved as part of the second stimulus.

See: Proposed Tax Breaks and Credits That Could Make the New Stimulus Bill a Welcome Relief
Find: COVID-19 Made All of Us More Broke – Here’s How We’re Struggling with Money at Every Age

The phaseout has been one of the sore issues in advancing the bill.

Biden said last month that there’s a need “to target that money. So, folks making $300,000 don’t get any windfall.”

Republicans — as well as some Democrats, including West Virginia Sen. Joe Manchin — have been pushing to lower the eligibility criteria. During the vote in February, Manchin, along with Republican Sens. Susan Collins, Mitt Romney and 13 others, introduced an amendment to the bill to “establish a deficit-neutral reserve fund relating to targeting economic impact payments to Americans who are suffering from the effects of COVID-19, including provisions to ensure upper-income taxpayers are not eligible,” according to the amendment.