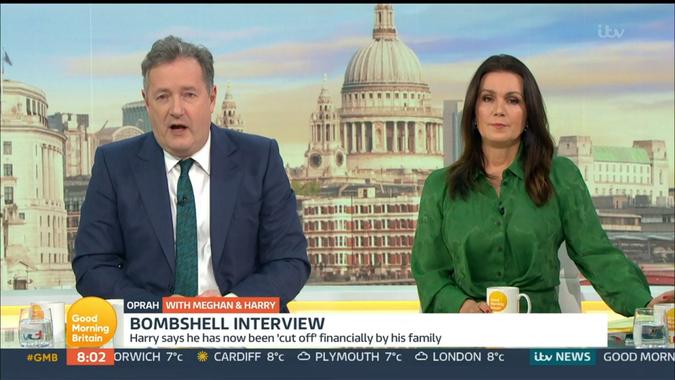 See: Harry and Meghan Exposed the Racism Built Into Every Royal Job
Find: How Rich Are Harry And Meghan?

“Following discussions with ITV, Piers Morgan has decided now is the time to leave Good Morning Britain,” ITV said in a short statement, according to CNN. “ITV has accepted this decision and has nothing further to add.”

The two-hour-long interview aired Sunday night in the U.S. and was watched by 17 million people, according to CNN. In its first statement since the Harry and Meghan interview aired in the U.K. last evening, Buckingham Palace says the royal family is “saddened.”

See: How Rich Are Queen Elizabeth and the Rest of the British Royal Family?
Find: Meghan Markle and More Americans Made Royal by Marriage

Ofcom, the British communications regulator, said in a tweet, “We have launched an investigation into Monday’s episode of Good Morning Britain under our harm and offence rules. As of 14:00 on Tuesday 9 March, we have received 41,015 complaints about the programme.”

Morgan said on Monday that he was “sickened” by the couple’s interview and called it a “trash-a-thon” of the monarchy, according to NBC, adding that the couple had dropped a “race bombshell” regarding an alleged conversation where a family member questioned how “dark” their children would be.

“I don’t believe a word she says, Meghan Markle,” Morgan said. “I wouldn’t believe it if she read me a weather report, and that fact that she fired up this onslaught against our royal family, I think is contemptible.”

Morgan posted a clock picture on twitter an hour ago, with the caption “tick tock.”