How Rich Is Chelsea Clinton? 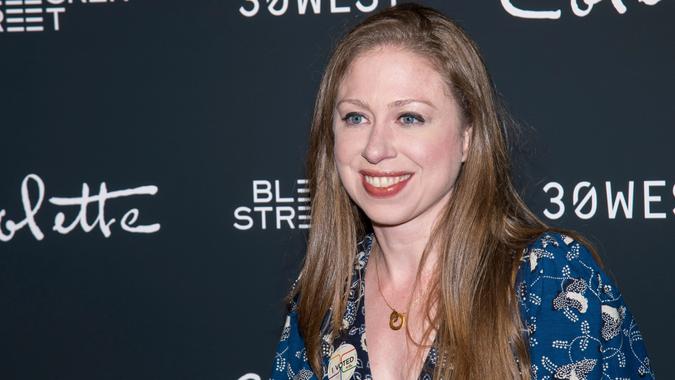 The daughter of former President Bill Clinton and Hillary Clinton, a former senator and former secretary of state under President Barack Obama, Chelsea Clinton, now 41 years old, has amassed a net worth of $30 million, according to Celebrity Net Worth.

See: How Rich Is Ivanka Trump?
Find: Should You Refinance Now With the Low Mortgage Rates?

A New York Times-bestselling author, she has earned the bulk of her money with consulting firm McKinsey & Company and on the boards of companies such as IAC, where she is a stockholder as well.

Born in 1980, Chelsea Clinton grew up with her parents in Little Rock, Ark., where her father served as governor. In 1993, Chelsea Clinton entered the public eye as the first daughter when Bill Clinton was inaugurated to the White House. She attended Sidwell Friends School, considered the “Harvard of Washington, D.C.’s private schools,” according to Celebrity Net Worth.

Clinton was selected as a National Merit Scholarship semifinalist in her senior year and went on to attend Stanford University in Palo Alto, Calif. After graduating with the highest honors and a bachelor’s degree in history, she went on to Oxford University to earn a master of philosophy and doctorate in international relations. She also graduated with a master of public health degree from Columbia University’s School of Public Health. She has been teaching at the school since 2012.

After graduating from Oxford, Clinton went to work at McKinsey & Company, a consulting firm, and then worked for Avenue Capital Group, a global investment firm. In 2011, while still attending Columbia University, she worked as a special correspondent for NBC News. She kept that position until 2014, earning $600,000 in her last two years with the network.

She served on the board of the online travel company Expedia, earning a $250,000 base salary annually.

She has served on the board of directors for the internet company IAC since 2011, earning $50,000 as an annual retainer and $250,000 in IAC restricted stock units per year, as GOBankingRates previously reported. In January 2020, she had an $8.95 million stake in the company. She also serves on the board of the School of American Ballet.

See: All the Ways the Biden Family Has Made Money Over the Past 20 Years
Find: How Rich Are Barack Obama, Joe Biden and All the Other Living US Presidents?

Work With the Clinton Foundation

Coming from a family of philanthropists, Clinton is no stranger to giving back. She has been working with the Clinton Foundation since 2011, ultimately stepping up to become vice-chair for the Foundation. She does not collect a salary for her work on the board. Instead, she works as a public speaker-for-hire and then donates the money from those speeches back to the foundation, where it goes toward the foundation’s causes, which include improving public health, creating opportunities for women and encouraging economic growth, according to Celebrity Net Worth.

In addition to her work with various for-profit companies and organizations, Clinton has bulked up her net worth as a New York Times-bestselling author of children’s books. Two of the six children’s books in a series called “She Persisted” became instant bestsellers, Celebrity Net Worth reported. The latest title in the series is “She Persisted in Sports,” a book about American women Olympic athletes such as Mia Hamm, Wilma Randolph and Venus and Serena Williams.

Chelsea and her mother, Hillary, co-authored a book called “The Book of Gutsy Women: Favorite Stories of Courage and Resilience.” The mother-daughter team toured together to promote the book. Chelsea Clinton also helped her mother on the campaign trail when her mother ran for president of the United States in 2016.